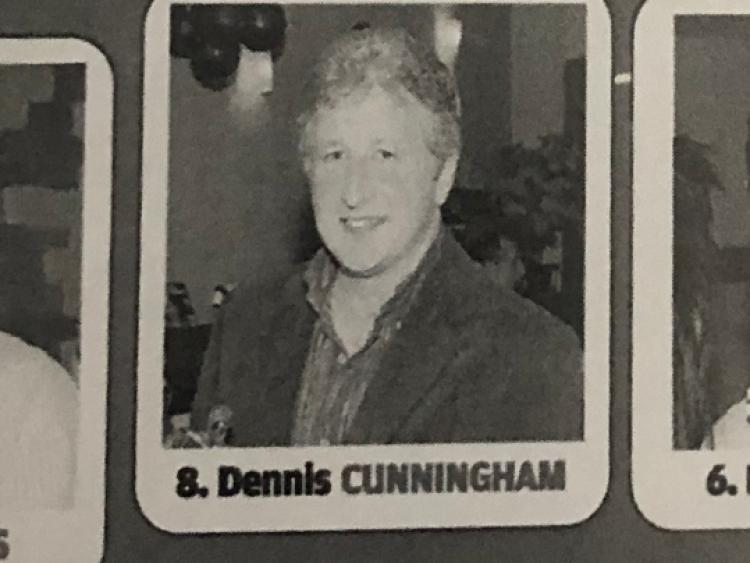 Dennis Cunningham agreed to sign for Tommy McConville’s Finn Harps after leaving Dundalk FC for a second time in 1986. Amid the troubles, the pair would travel north every second Sunday for home matches in the First Division.

McConville, player-manager that season, usually did the driving, sifting in and out of the North on the way to Ballybofey, negotiating more checkpoints going to and from Finn Park than goalmouth scrambles during the intervening game.

The routine was monotonous. Pull up. Roll down the window. Get out of the car. Tell the soldier what he needed to know. Show him the contents of the boot. Move on. It became second nature to the Dundalk duo, until one particular afternoon.

“We were going through a checkpoint in Aughnacloy one time, myself and Tommy, and Tommy used to have to get out and open the boot of the car to show there was nothing in it,” Cunningham recalls.

“He got out and the soldier runs over, ‘get back in the car and up that road. They’re shooting at us from the hill!’

“He wasn’t long getting back in the car. It was the quickest I ever saw Tommy move!” 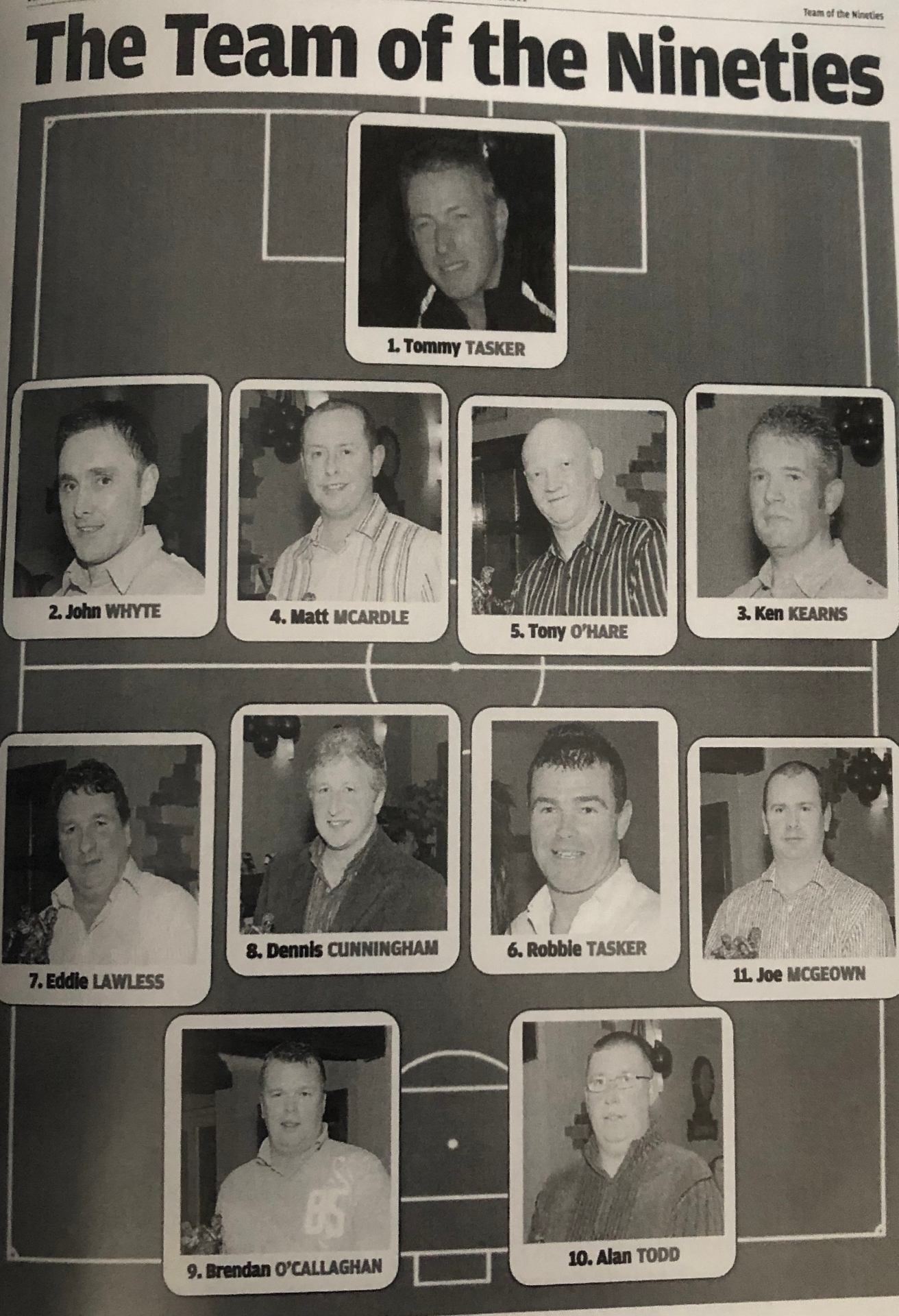 GOOD STOCK
Cunningham hails from good stock. His father, Donal, played for Dowdallshill mainly, alongside a bit of soccer, while uncle Seán will be a Louth hero forever more. It was his goal, of course, that swayed the 1957 All-Ireland final the way of The Wee County. Another of his father’s brothers, Jim, was a winning selector against Cork.

Their nephew was a talented Gaelic footballer himself, representing Clan na Gael in the 1980 minor championship final defeat by Naomh Baoite (Mattock Rangers/Naomh Máirtín), lining out alongside the McKeever brothers, Colm Markey, Johnny Cunningham and Peter Fitzpatrick, to name but a few.

Though soccer was his game and by hailing from the Castletown Road, Greenfield the team of his youth, up until an opportunity arose to join Tommy Connolly’s Dundalk juveniles. In gaining selection he got a stroke of fortune for which he remains grateful.

“When we got to U16 there were two players picked from every club to go up to Oriel Park. I actually missed out, Gerry Hoey and Johnny Cunningham went up from Greenfield, but it just wasn’t for Gerry - he was more into the Gaelic - so I was asked up and never really looked back after that.”

The youth team he was a part of proved to be quality-ridden. Paul and Johnny Cunningham, Paul McLaughlin, Barry Kehoe, Jimmy Reilly and Dessie Todd are teammates he lists off, and they reached the FAI Cup semi-final where Cherry Orchard knocked them out after extra-time. It remains a source of consternation almost 40 years on, particularly as their conquerors went on to win the decider by seven goals to two.

“It was a game we should have won,” he mutters, ruefully.

Though the young Lilywhites had done enough to create an impression and as many as half went on to represent the B-team, with some, including Cunningham, getting into Jim McLaughlin’s senior side.

He debuted alongside his namesake, Johnny, in a Leinster Senior Cup match, getting in shortly after Kehoe and Reilly had made their breakthroughs. And the following campaign, 1982-’83, McLaughlin’s last at the helm, he became a more regular inclusion, taking to the field 11 times.

“The door was starting to open for me and in the last year under Jim McLaughlin, I played in the last six or seven games. 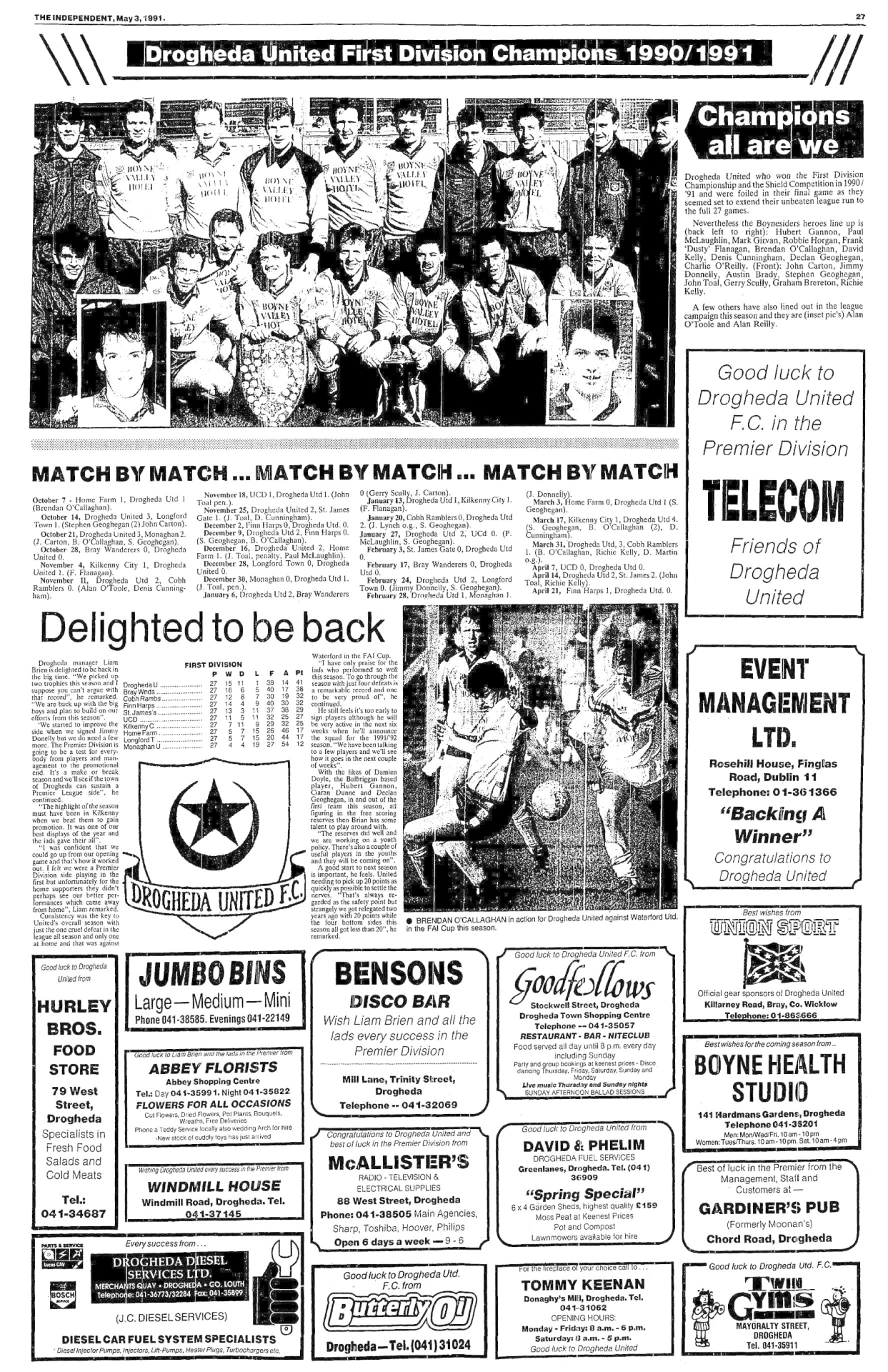 “The big thing was to qualify for Europe and you needed to finish either first or second in the league. That year Athlone had already qualified as champions and it was between Dundalk and Drogheda to see who got second.

“It came down to the last game of the season; we were in Sligo and drew, 1-1; missed a penalty. That was the difference in qualifying for Europe and not. There was only a point in it in the end.

“It would have been the first time Dundalk had missed out on Europe for about six or seven years. They’d played all the top teams - Spurs, Liverpool, Eindhoven, Hajduk Split - in the years before. They were a terrific team but probably slightly past their best.”

The disappointment was tangible as the club’s fortunes nose-dived for a couple of seasons afterwards. John Dempsey came in as manager and didn’t appear to fancy Cunningham, who moved on to Newry Town for a couple of terms, joining Ollie Ralph at the Down club.

It was a downbeat way for McLaughlin, a legend, to depart.

“He commanded the dressing room from the start,” Cunningham says of the heroic supremo. “He’d take players’ input on board, but he was very knowledgeable about the game and knew exactly what he wanted; he knew what he wanted from each player and for me personally, he didn’t put any pressure on me.

“‘Just go out and play’. I wasn’t the type of player to get bogged down in tactics.

“He’d a great relationship with the senior players, the likes of McConville, Lawlor and Dunning; great respect for them.”

But, by 1985, the midfielder was back at Oriel Park. Turlough O’Connor was now at the helm, though Connolly was integral in Cunningham’s signing. In and out over the course of the following season, making 12 appearances, he opted for a change, hence McConville threw him a line.

“I wanted first-team football and to be in the first XI. At this stage you’re ambitious and being on the subs’ bench was no good to me. Tommy McConville got the job at Finn Harps and he asked me up; I played a trial and they signed me the same night.” 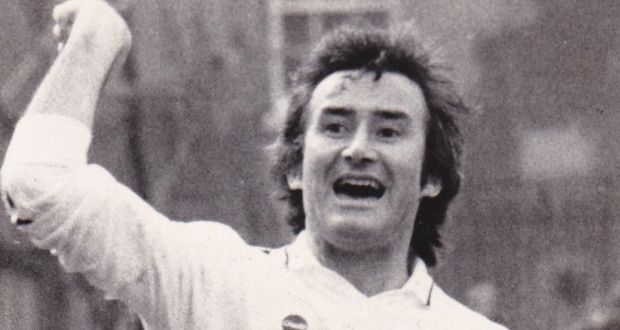 MIDFIELD MAESTRO
Harps had a fine side that year and pushed Derry City in the title race for much of the campaign, with a line-up entailing Paul Curran at centre-back, beside McConville, and Kevin McLaughlin up front.

Tom McNulty linked up with the Ulster side in year two, though Chris Rutherford was now in charge, after Tommy Mac was let go, and he “just didn’t have the same football brain”. Yet Cunningham continued, signing on for a further two seasons, commuting with physio Jimmy Sharkey, from Castlebellingham, a hugely popular figure.

In his final term at Harps, Cunningham struck 13 goals from centre-field and was awarded the First Division’s player of the year gong. Therefore attracting interest from top-flight clubs. Though, in choosing Drogheda United, he continued in the second tier. The arrangement was more practical for the carpenter by trade.

“I was up at the PFAI dinner getting the award and I was approached by three clubs - Drogheda, Sligo and Bohs - to sign.

“I’d the pick of the three of them and I mulled it over for a few weeks, and ended up going with Drogheda. Sligo was too far away and Bohs, I was interested in going to Bohs. It was really a toss of a coin between Bohs and Drogheda.

“Billy Young was manager of Bohs and they challenged Dundalk a lot at that time, but the travelling to Dublin for training put me off, I’d have had to be up there two nights a week, whereas I could still train with Dundalk at Drogheda.”

Liam O’Brien was over The Drogs and Cunningham was vital to the promotion-winning campaign of 1989. Such was his importance to the team that the Drogheda Independent, ahead of the United Park side’s Premier Division comeback, suggested the midfielder was key to any potential success.

Relegation would be the outcome, though, as the claret and blues lacked the depth required, but another title victory in 1991 saw Cunningham and co get another crack at the top-flight and so his fourth and final year on Boyneside saw them survive the drop by a single point. Mission accomplished, as it were.

An overall enjoyable experience, particularly given the El Paso crew that he was accompanied by.

“Those two championships with Drogheda, Paul McLaughlin and Brendan O’Callaghan were on those teams and we’d great camaraderie, travelling up and down to the games together. You’d that connection with guys I played with the whole way through.”

Kilkenny requested his services, but now into his 30s, Cunningham rejected the advances in favour of Dundalk Summer League involvement. Jocelyn and Pegasus availed of his signature over the years that followed, while he was also on a five-a-side team, containing Richie Blackmore and Ralph, that won at the Maytime Festival. Such was the Castletown man’s impact that he was named on the Summer League’s team of the nineties.

“There was a great standard to the teams around Dundalk at the time and you could name two or three players with the Quay, Rock Celtic, Shamrocks, etc, who were all involved with League of Ireland teams one way or the other at some stage.”

BIG AL’S BOW
Alan Shearer made his Blackburn Rovers bow in Drogheda against the locals, with Cunningham in tow. And so, when the former is asked about the greatest players he played against, the Geordie is prominent on the list.

“The time I played against Alan Shearer, he scored three up in Drogheda. That guy, he stood out a mile.”

Democrat: “Did you get close to him? Has he any reason to remember Dennis Cunningham?”

Dennis: “I wouldn’t imagine so. If he does, I think there’s something wrong with him.”

He may well, though. Cunningham was a top-class player domestically, as is evidenced by his call-up to League of Ireland XIs for both Ray Treacy’s testimonial and the clash with Jack Charlton’s Republic of Ireland.

Where are his medals, the shelves worth of accolades? He doesn’t know. There aren’t many pictures either. Just the way he likes it, it seems.

Democrat: “I’m struggling for up-to-date snaps of you. I’ve a Drogheda team photo here with you in it. That’s all. Would you’ve any you’d like me to use?”

Dennis: “Just go with the young-looking me!”