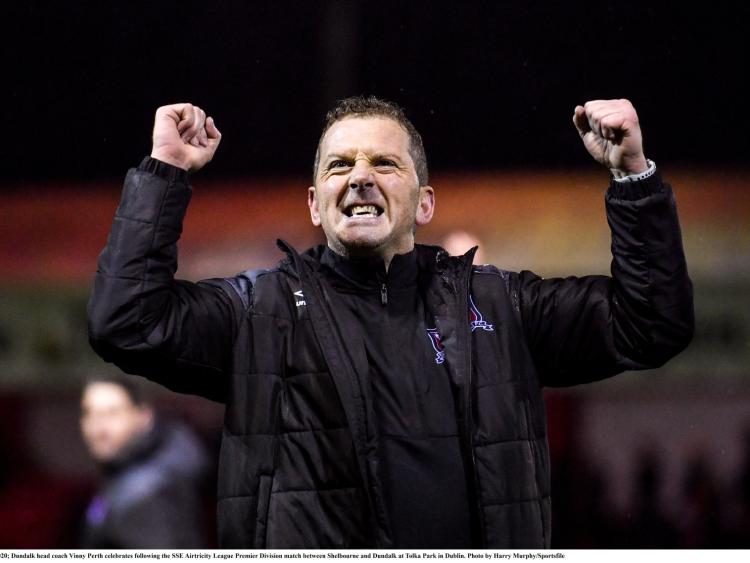 Dundalk FC manager Vinny Perth expressed his “shock” at the The Leesiders’ 6-0 hammering at the hands of Shamrock Rovers. (Pic: Sportsfile)

Ahead of the visit of Cork City on Monday night, Dundalk FC manager Vinny Perth expressed his “shock” at the The Leesiders’ 6-0 hammering at the hands of Shamrock Rovers.

The Lilywhites will be hoping to make it three wins from three in this season’s SSE Airtricity League when they welcome Neale Fenn’s team to Oriel Park.

Fenn’s young side are up against it, having lost both of their opening two matches, shipping seven goals in the process without scoring one themselves, but Perth is, nonetheless, expecting a tough contest.

“We have to be ready for Monday, they’ll come up here with a game plan,” said Perth on Friday night.

“I’m shocked by that (Cork’s loss) because I saw them against Shels last week and thought they were very good. Neale has done a good job up until obviously tonight, so he’ll be disappointed with that.”

Perth was pleased with his own side’s performance on week two, which saw them secure a very hard-fought, 2-1 win over a newly-promoted Shelbourne side in difficult conditions at Tolka Park.

“I thought we showed a real determination, particularly in the last half-an-hour. I hope it was also exciting as well because I think the league needs games like that where there’s something on the line. As much as it wasn’t a pure football game, I hope there was a bit of excitement to it.

“You must give Shels credit, they pushed us and played a certain way. They were brave, they played 4-4-2 and got the ball forward. I thought defensively, Seán Hoare and Andy Boyle were really good because (Ciarán) Kilduff’s a handful.

“We generally start slow. I was a bit worried, missing five attackers, but they were two difficult games. That was a really difficult game there considering the conditions tonight, so I’m very happy.”

After a stellar debut against Derry City on opening-night, Greg Sloggett, playing in a more advanced role, put in another outstanding performance against Shels, much to the delight of Perth, who outlined the overall importance of the new signings that have been brought into the club this year.

“Greg Sloggett showed why we hold him in the highest regard. I thought his performance in particular was very good. The midfield had to stand up and be men and I think they did tonight.

“We’ve got a huge influence of young players coming through. The squad is evolving, we’ve been criticised as a club, criticised as a team a lot of late. It’s ironic that we’re called a very old team.

For the Cork game, Dundalk will again be without the injured duo of John Mountney and Seán Murray, while Patrick McEleney and Georgie Kelly are “touch-and-go” in terms of their fitness.

Perth is also hopeful that Stefan Colovic will link up with the squad at “some stage this week”.