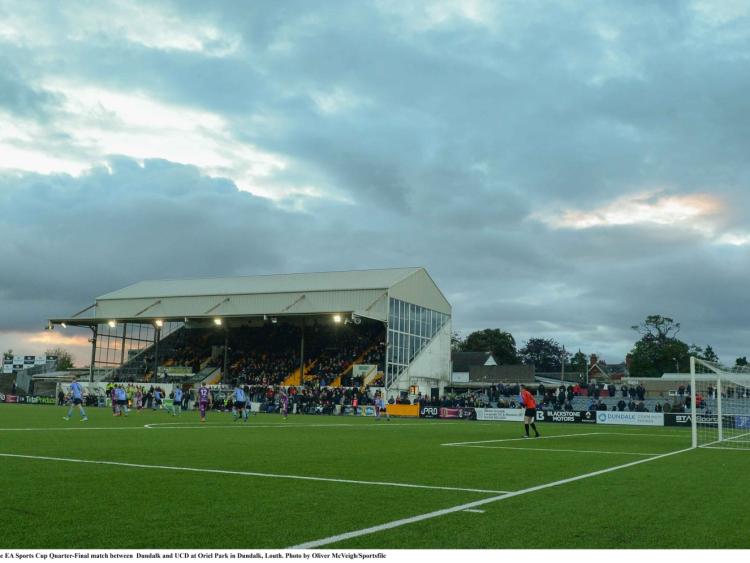 Oriel Park in its current guise ahead of possible development work. (Pic: Sportsfile)

CEO Mark Devlin says Dundalk FC have looked at the possibility of moving away from Oriel Park, but insists the Carrick Road site remains the best option for the club’s grounds.

The Englishman succeeded Mal Brannigan as the Lilywhites’ head earlier this year with a proven track record, having been part of Brentford’s rise to the Championship over the last decade.

And he says incremental improvements to ‘The Home of Football’ have - and will be - carried out. Since Peak6’s purchase of the club, tarmac walkways have been installed around Oriel, minor infrastructural improvements made to the main stand and new toilets added to the away end, on top of major upgrades to the YDC and significant investment in the playing staff.

It’s all part, Devlin says, of the club’s forward-moving strategy that he hopes will be continued.

“The area at Oriel is probably the right site,” Devlin told Between The Stripes’ LOI podcast.

“It’s probably just about what can be achieved there because there are some real challenges.

“I’d like to think there is a creative scheme out there that is both cost sensible and realistic. What I don’t want to do is raise any sense false of hope that we’re either going to completely rebuild Oriel or build Oriel, because we’re miles off away from that, but there is an understanding that we need to improve facilities.

“The club have previously done some work and feasibility studies on moving away from Oriel. The sense, as I understand it, was that the area around Oriel is the best place: it’s near the train station, it’s just outside the town centre.”

He added: “They’ve (the owners) invested heavily in the YDC and we hope to be able to open that and move over in the next two or three months.

“I’d like to look at how we can improve facilities behind (the town end goal). There’s too many open areas.

“The stadium is open to the elements and if I was a Dad or Mum and wanted to bring my kids along; if it looked anything like a wet, windy and horrible evening, I’d have to think long and hard about bringing them to watch football at Oriel, however passionate I was, because there’s every chance they’re going to get soaked.

“I’m sure there are further improvements that we can make. It’s all going to be small incremental steps and then obviously my job is to put in place a long-term plan and convince the owners to buy into it.

“There’s a lot of work to be done, but we do have owners who are incredibly enthusiastic about the club and very supportive about what we’re trying to achieve. I think that’s been seen by the level of investment on the field and, coming from North America, they know the importance of good facilities for supporters, both current and if we’re going to attract more supporters in the future.

“I think there are some exciting times ahead. We’ll make the small steps, hopefully as quickly as possible, and all I would ask is for a degree of patience as we put in place a realistic plan of what can be achieved in terms of making more major improvements at Oriel...

Devlin is hopeful the recent shake-up at the FAI will lead to a better future for the League of Ireland, something which the Dundalk chief executive feels is badly needed given that clubs are currently unaware of specific details of their division’s sponsorship and TV income.

But, on a domestic level, his intentions revolve around ensuring the club’s development in a wider sense. Effective marketing, closer community links and a better all round matchday experience are key to “doubling” or “trebling” attendances.

Chairman Mike Treacy has regularly spoken of his trust of data in regard to player recruitment, among other things, and Devlin tends to think along similar lines having used it effectively at his previous club, Brentford.

“We used stats right across the business (at Brentford); not just in player recruitment, but we invested heavily in software in terms of membership schemes, season tickets and ticketing systems which meant that we got to know more about our fans than the majority of clubs, certainly in the Championship and I would suggest even in the Premier League where they probably feel that they don’t have to work quite as hard to drive attendances and build a fanbase.

“We utilised stats and the creation of a data warehouse so we knew an awful lot about our supporters. We knew what they liked about Brentford, what they did when they came to Brentford, in terms of shopping and catering.

“Slowly but surely we were getting to know about what they liked to do away from Brentford and that helped us in our commercial dealings because that kind of level of knowledge and data is very powerful.

“There’s a wonderful base at Dundalk. We’ve got a great side on the field, we get really good numbers through the gate and we have very passionate supporters.

“The club is a big player in the local community and we need to work hard now to build our fanbase.

“The use of data, the use of stats, I’m determined to see our ticketing and retail systems improve dramatically so that it’s much easier to buy tickets, not just for themselves, but for members of their family and friends. We then get data about the people who come along with them and an opportunity to market to them.”