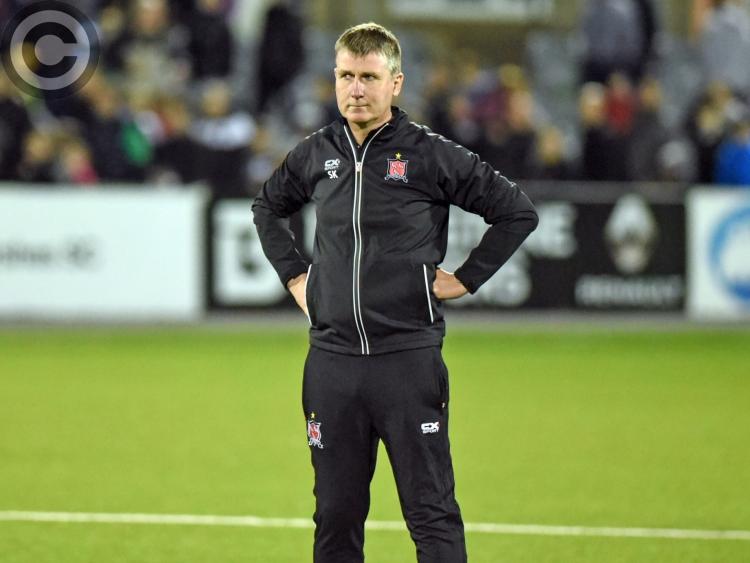 A failure to take any of their numerous openings contributed hugely to Dundalk FC losing their unbeaten league record at Turner's Cross on Friday night.

Completely against the run-of-play, Gearóid Morrissey's second half drive settled a contest which the visitors largely dominated. Indeed, the goal apart, Cork otherwise failed to test Dundalk 'keeper Gary Rogers over the 90 minutes.

But once what proved to be the winner went in, with the Shed End of the southern venue now alive, there looked to be an inevitability about the outcome despite The Lilywhites continuing to probe in the attacking half.

Ten shots off target illustrates just how wasteful Dundalk - who drop to second in the table and behind The Rebels as a result - were on a very frustrating night.

Showing just the one change from last week's draw with Derry City, with Chris Shields coming in for Stephen O'Donnell, the Louth side had the better of a hotly contested first half where referee Neil Doyle's intervention was required more than once following clashes field-over.

It was a half of limited clear-cut openings, although The Lilywhites certainly looked the more threatening having felt their way into proceedings. Daniel Cleary's flicked header from Michael Duffy's teasing delivery glanced off the post midway through the half and that chance appeared to flip the pendulum in the visitor's favour.

From there to the break, Stephen Kenny's team took control with John Mountney and Robbie Benson impressive. Though it was the diminutive Duffy who had the game's first effort on target when - on 23 minutes - he drew a firm stop from Mark McNulty with a dipping free-kick.

Cork, for their part, failed to test Gary Rogers before the interval.

An injury to Seán Gannon saw the defender replaced by Stephen Folan at half-time, but this appeared to have little impact as chances continued to fall the way of Dundalk with Jamie McGrath spurning a gilt-edged opportunity when poking wide from 12 yards.

And that missed opportunity would come back to haunt his side as Cork took the lead with their first accurate - and only - attempt. Substitute Garry Buckley struck the 'bar and with the danger not cleared, Morrissey volleyed past the unsighted Rogers from the edge of the area.

In vain, Dundalk battled to regain parity with Benson and Ronan Murray - in for McGrath - unable to pass McNulty with efforts.

1-0 at full-time; this proved to be another very disappointing night on Leeside.