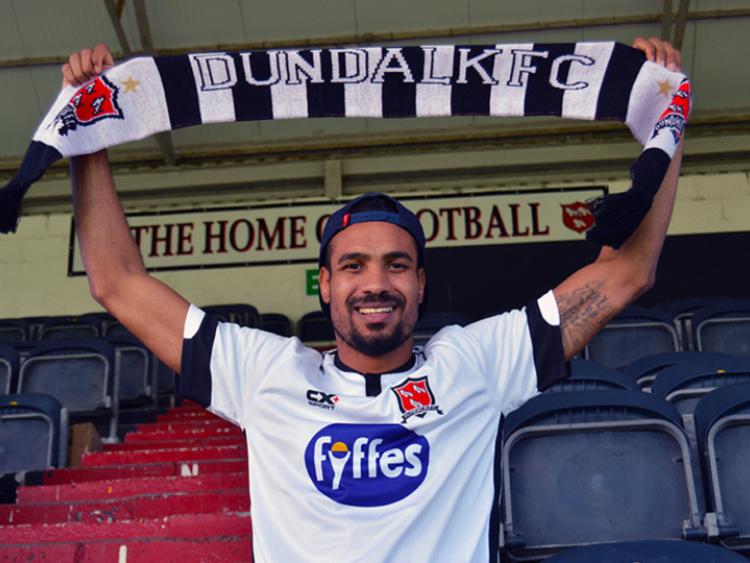 New Dundalk FC striker Marco Tagbajumi is "excited and ready to go" having made his debut at Shamrock Rovers on Friday night.

The Nigerian forward signed a one-year deal with the Lilywhites last Wednesday, becoming Stephen Kenny's 10th new addition, having last played for Norwegian top-flight side Lillestrøm. His most recent match having been December's Cup final in Norway where he collected a winners medal.

Speaking to The Dundalk Democrat on his move, Tagbajumi revealed the lure of European football played a central part in his decision to pen a deal with Dundalk.

"I spoke to Stephen (Kenny), the manager, and he really gave me a good vibe and assured me that this is a good move. I said 'why not', I was happy to get a new experience and, of course, the team are going to Europe and that's a big incentive," he said

"I didn't know anything about Ireland, but when I came down, just the way that normal people are, they're just so friendly. I've never met so many friendly people in my life. It's a place where I can be happy and that's what assured me to come here.

The 29-year-old, who holds Italian citizenship, has played for a variety of different clubs including AEL Limassol of Cyprus and Norwegian outfit and has scored 44 goals in 123 career matches.

Although he didn't watch Dundalk's matches with Rosenborg - a side whom he's very familiar with from his time in Norway - in last year's Champions League qualifiers, he appreciates the Lilywhites' performance in running the Trondheim side so close. His desire is to reach his peak with his new club, with the league title his aim.

"They do say that strikers get better between 29 and 32. If it is my peak period, I'm not sure as I'm a bit of a late bloomer as well because I only went professional at 21.

"What I hope to achieve at Dundalk is to give it 100%, do my best, try to get into Europe with the team and win the league if we can. That's the main goal.

"We are a very strong team, we are a very new team. Every new player needs to gel and that takes, of course, a little bit of time. But all the guys are top-notch, they're a top team," said Tagbajumi.