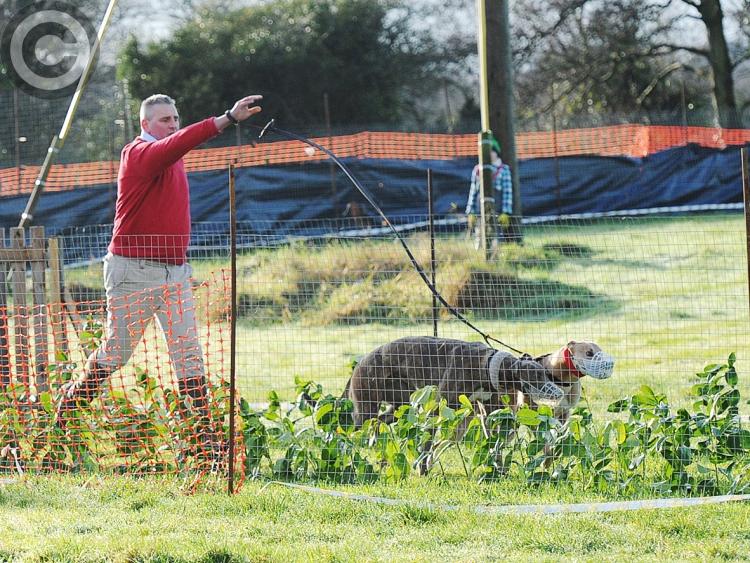 Just one year after celebrating its centenary, Dundalk & Dowdallshill coursing club was forced to reduce its programme considerably due to a shortage of hares.

The two-day meeting, run at The Commons, Dromiskin, concluded yesterday (Weenesday) afternoon, and not surprisingly, the attendance figures were down on other years because of the restricted programme.

For as long as veteran local followers can remember, this was the first time the famed Corn Cuchulainn, the meeting's feature event first run in the late 1940s, had its field halved to sixteen runners. It was the same with the Derby and Oaks trial stakes, while most of the supporting stakes also had reduced entries.

The problems in acquiring game is being experienced by clubs throughout the country. While illegal hunting with lurchers continues to cause havoc, the noticeable increase in the number of buzzards is also seen as a major problem. A bird of prey that feed mostly on hares and rabbits, Buzzards are a protected species.

Though reduced in size, the Corn Cuchulainn produced an exciting final and a worthy winner. Two kennels each with an outstanding record in the competition were represented in the final course, with victory going to Jim Maxi Collins' Blueview Trump, the choicely-bred coloured pup getting for a half-length win from Brendan Matthews' Newry contender, Bingo Bonus.

Local cheers were heard at their loudest when Hydepark Bingo was declared winner of the Derby Trial Stake. An inmate of Vincent Toner's Newry kennel, this lad is owned by a native of Dundalk's Quay area, Danny Kerr, thus the name Hydepark Bingo.

Always in front, the son of Coolavanny Bingo won comfortably in the end from Comrade Cutlet, running for Waterford owner, Bryan Cunningham.

There was no joy for the local runner in the Reserve Oaks Trial Stake final. Knockbridge's Mark Callan had Ballyoran Mora going for him, but while in touch early on, the fawn daughter of Vale View Flyer couldn't match the finishing burst of Benefit Biddy, owned by Newry's Raymond Heaney.

There was lots of local interest in the minor stakes' finals, and Ah Be Happy set the ball rolling by winning the Johnny Heeney Workers' Stakes for promoting club stalwart, David Hoey. In the final Ah Be Happy proved a couple of lengths to good for Brain Freeze, owned by former Louth goalkeeper, Niall O'Donnell.

The O'Donnell kennel was out of luck again in the Tommy Thornton Stakes decider. Niall O'Donnell senior had Irishtown James through, but the home-bred proved no match for Goertmelia Wonder, running for the Duleek partnership of Myles Kavanagh and Helen Murray. The winner is trained by Seamus Murray, who has a fine record at this meeting.

Martin Sharkey was completely out of luck in the final of the PP Coffey Cup. He was represented by Fane Hye Bhoy, but going unsighted immediately on leaving slips, the white-and-black left the way open for his opponent, Washingbay Star, to race to a bloodless victory. The winner is owned by Co Tyrone's Michael McAliskey.

The big surprise in the opening Corn Cuchulainn opening session was the defeat of Rosskeen Colonel.Something of a Carlow specialist, having won his trial stake there last season, The Co Tyrone-owned runner was back at the South Leinster venue this year, and impressed with a win in the prestigious Corn Ceatharleach.

Rosskeen Colonel was chalked up at no better than 5/4 to win out, and in his opening course he mastered one of his Carlow victims, Charlemont Flex. However, next time out, he caught a real tarter in Blueview Trump, winner of Trim's Derby Trial Stake a number of weeks back and was eliminated.

The betting suggested Rosskeen Colonel hadn't impressed in the opening round. He was out to 7/4 before the second round was run off, while Blueview Trump was a hard 2/1 chance to take the title.

Five bitches were in competition in the top half, the last survivor of which would take the Paddy Carroll Memorial Trophy. Having accounted for her kennelmate, Hearts Of Hearts, in the opening round, Heart Strings put her name on the long-established trophy by accounting for Our Wonder Girl second time up.

This lassie is owned by Newtownbalregan's Michael Heeney, who won the Carroll – commemorating a first-cousin of his - a number of years back with Risk Disruption.

Having disposed of the long-odds favourite, Blueview Trump was made a 4/6 chance on the morning of the second day, and he had a trouble-free passage to the final, getting the better of Buster Edwards.

In the top half of the draw, Heart Strings had the odds against her in her clash with Bingo Bonus, and while she led briefly early on, she was a couple of lengths in arrears where it mattered most.

The betting on the final was tight, as indeed was the course itself. They were locked together for a good part of the way, but coming on to the turn, Blueview Trump made the decisive move, getting up for the spoils with a half-length to spare.

Bringing up win No 6 for the Collins kennel, Blueview won his Derby Trial Stake at Trim a number of weeks back, and bred on lines that have previously made an impression at Clonmel, there are many who will want to be on the impressive-looking black and white when he takes to the Powerstown sod at the end of next month.