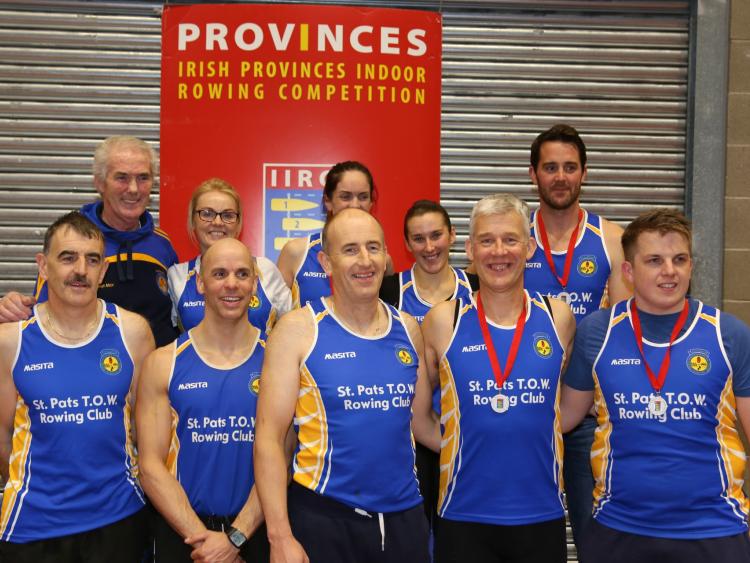 The St. Pats TOW team at the Championships in UL. (Pic: Just Look at the Lens Photography)

Last weekend saw the St. Pats TOW Rowing Club making the long journey to the University of Limerick Sports Complex to compete in the Provincial and Irish Open Indoor Championships.

All four Provincial Championships are run in Limerick because of its superb infrastructure, which is not available in every province. St. Pats had nine rowers competing and were hopeful of putting in a good performance and getting a few medals in the process.

The first race was the 1000m and the first into the fray was Cathal O’Neill, who was having his first ever race. Showing no sign of nerves, Cathal rowed an absolutely brilliant race, winning Ulster & Irish Gold with a new P.B. by five seconds, in a time of three-minutes and three-seconds.

He was followed in the next race by Gary Conway who, with a great row, took Ulster Gold and Irish Open Silver medals. Gary was followed by the intrepid Oliver Short who was hoping to build on his wonderful results the previous week in the Scottish Championships.

As usual, Oliver took off fast and duly won Ulster and Irish Gold medals. Yvonne McEntee was next and rowed very strongly to finish fourth overall, but first in Ulster, in this her first race.

Last of the 1000m rowers was Blackrock native Ronan Brennan. Ronan rowed a very good race against some to class men, but won through to take a hard-earned Ulster bronze medal.

The 2000m races were next, only two of the St. Pats rowers were competing here – Ciara Conway and Oliver Short - and with both racing as defending champions, they were planning to give it their all to retain their titles. Ciara was first off and was in a high-class field, but after a very fast start established her a good lead and with great pace, she controlled the race to take first place and the gold medals in both the Ulster & Irish Championships. Oliver started fast and got an early lead, however, the effects of the earlier 1000m took its toll and Joe Riordan, with fresher legs, having not competed in the 1000m, gradually caught Oliver and went on to take the top prize. Oliver fought every inch of the way and took a very hard-earned silver medal in both Ulster and Irish Open.

This was 23 medals in total and placed St. Pats TOW as one of the top teams that participated. Coach Hugh Mór Conway was rightly very proud of all the rowers and training will continue for the National Championships which will bring the rowers back to in Limerick in January.