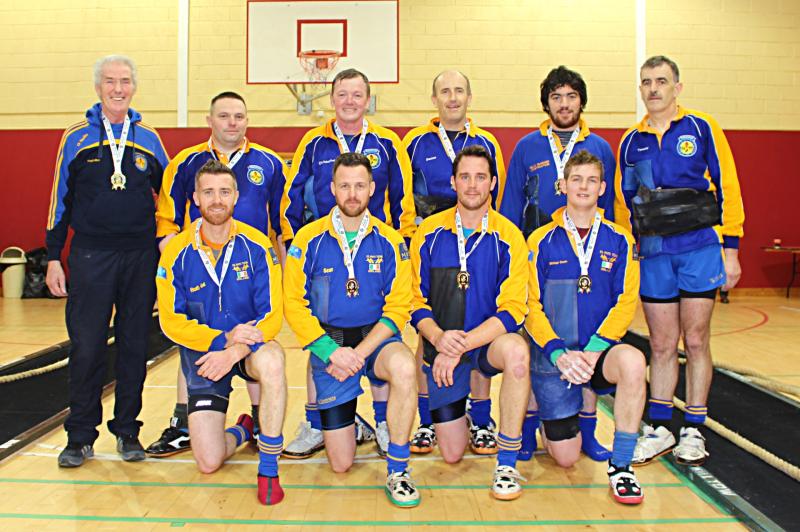 Last weekend saw the second round of the National Indoor Tug-of-war Championships which were held in Buncrana, Co. Donegal. Two weights were to be contested, the 680kg 8-a-side and 425kg 5-a-side. St. Pats, as defending champions at both weights, were the main target for all teams.

The semi-finals had St. Pats easily beating Carndonagh two straight ends to nil and Mountain View, after a hard battle against Clonmany, set up a final confrontation with St. Pats.

The final was a straightforward affair with St. Pats proving much too good for Mountain View, to retain the National 680kg title.

Next up, was the National 425kg 5-a-side and with Clonmany B and St. Pats B joining the fray, eight teams contested the round robin league section. St. Pats A, pulling with great power and strength, easily won all their pulls two-nil to move into the semi-finals. St. Pats B, after some very tough ulls, also made it through to the semi-finals. Clonmany and Carndonagh completed the semi-final line up.

The semi-finals saw St. Pats A moving into the final, where they were joined by St. Pats B, who won through after a mighty three-end battle with Clonmany.

In the final, the St. Pats A team were just a little too strong for the B team and so added the National 425kg title to this season’s collection. St. Pats have won all four Nationals this season and are well in control as they attempt to emulate last season’s feat of winning all 10 National senior titles.

Next for the St. Pats tug-of-war team will be the long trek to Tralee, Co. Kerry for the third series of National Championships.