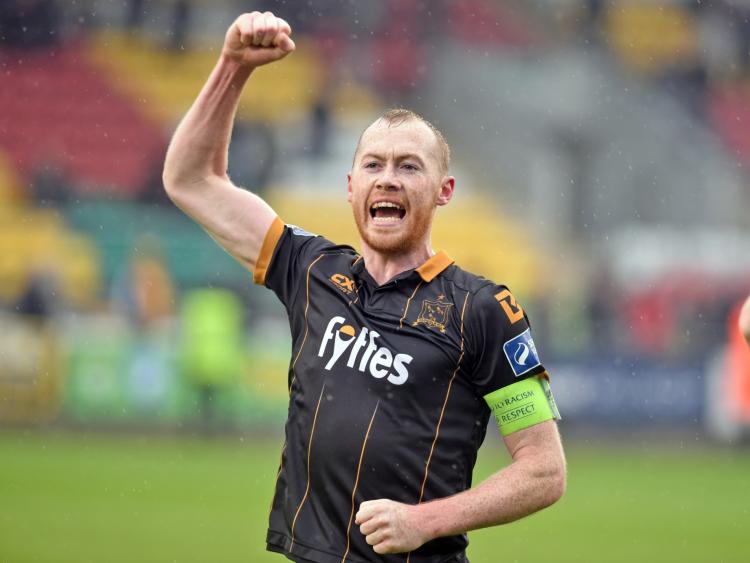 Lifting the EA Sports Cup on Saturday was “a career highlight” for Dundalk midfielder Chris Shields.

It was ‘a second coming’ of sorts for Shields as ‘skipper after he led the side in their miserable 2012 campaign. He had little time to prepare for his reincarnation in the role, however, with Stephen Kenny only breaking the news in the pre-match team talk.

“I just found out today when Stephen named the team,” Shields told The Dundalk Democrat.

“He said it to me in the team talk, ‘you’re here six-years and you’re getting the honour to lead out the team in a cup final’ and I was privileged to do so.

“You don’t often get the chance to do it and I asked Stevie (Stephen O’Donnell) to come up and lift the trophy with me, but he said go on and do it yourself so I’m thankful for that because it’s the first time I’ve done it in my career,” the midfielder said.

“It was a great day and a great win. Once we got the early goal, it settled us and I suppose we had to weather a storm because Rovers were playing well and against these good teams, you have to see these things out.

“Sometimes that happens in games and Rovers seemed to dominate towards the end of the first-half, but we re-grouped at half-time and seemed to come out well after the break. And after the red card, I felt we controlled the game.”

Shields enjoyed the “real cup final atmosphere” in Tallaght on Saturday, though the thing that pleases him most is the fact that Dundalk have now “found themselves” after a dip in form early in the season.

“We have found ourselves again. It was a re-grouping period at the start of the year when we were very inconsistent and we knew that ourselves, that things just weren’t going right for us,” added Shields.

“But, since the break, to a man we have been absolutely brilliant. The attitude to training has been fantastic and it’s not just the 11 players that won this tournament, I think everybody played in it and everyone deserves the win at the end of the day and that probably makes it that bit sweeter.”