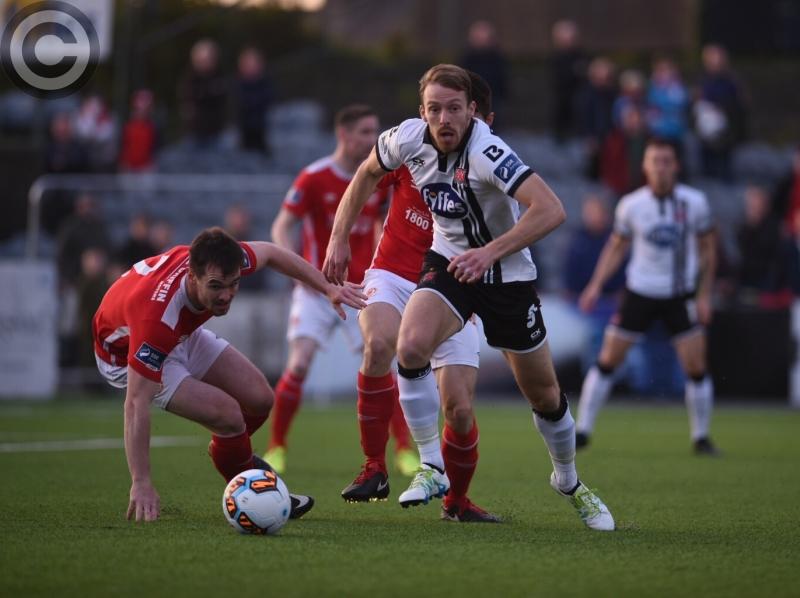 Michael Duffy was the shining light as Dundalk put 10-man St. Patrick's Athletic firmly to the sword at Oriel Park tonight by six goals to nil.

A brace from David McMillan in first-half added time was supplemented by Seán Gannon, Robbie Benson, Dylan Connolly and Thomas Stewart after half-time as The Lilywhites obliterated their relegation-threatened opponents.

While Dundalk were scintillating at times, especially in the early parts of the second-half where Duffy, Patrick McEleney and McMillan tore St. Pats asunder, this was in the absence of the visitors' captain Ian Bermingham who was sent off when the game was scoreless.

The St. Pats captain reacted angrily after referee Jim McKell awarded a penalty against Lee Desmond for his shunt on McMillan, with the result being his dismissal. And the forward made it a double punishment by firing the resultant penalty to the net past Lukasz Skowron, who replaced the injured Barry Murphy after 11 minutes.

There were five added-time minutes in the first-half and before that time had elapsed Dundalk ended the match as a contest when McMillan headed Duffy's corner to the net.

A 2-0 lead was reflective of the first-half as Dundalk were in complete control with McMillan and Duffy having a shooting contest of their own.

Graham Kelly's effort early in the second-half, which went inches past the post, was the closest St. Pats came to a major, but thereafter it was one way traffic.

Gannon stole in behind to make it 3-0 before Benson deflected a Duffy pass to the net on the hour-mark. Connolly made it 5-0 having latched onto Gannon's long ball before Thomas Stewart reacted quickest in the six-yard box to score Dundalk's sixth with 10 minutes to play.