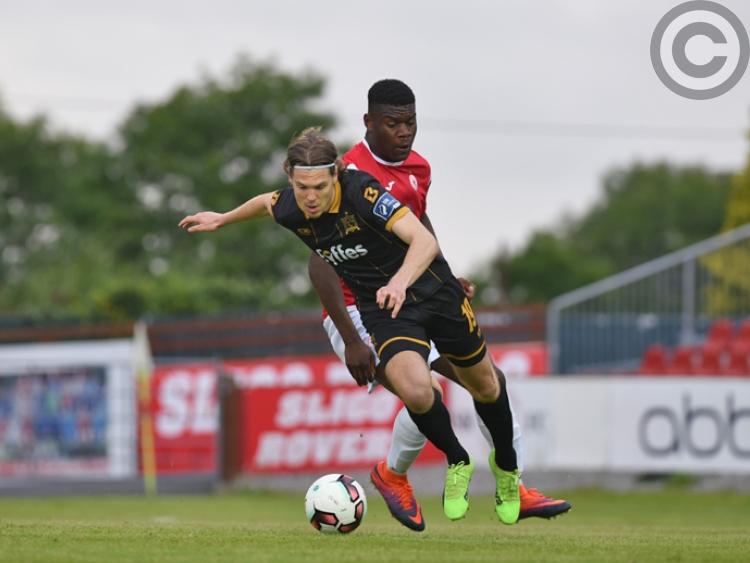 Dundalk stretched their unbeaten record at the Showgrounds to five-years and seven matches this evening with a 1-1 draw with Sligo Rovers.

The Lilywhites held the lion’s share of possession, particularly in the second-half, but too often they lacked penetration with their attacking play far from its cohesive best.

Sligo were well worthy of their point and had they been more clinical in the opening-half, they could well have taken the spoils. They were much more cautious after the break though, in allowing Dundalk to take control.

Despite their possession, the closest the champions came to finding a winner was via two Sligo players. Firstly, Igiehon and then Leahy – in added time - nodded narrowly wide of their own goal as Gerard Lyttle’s men flirted with defeat.

While a draw does little to aid either side’s cause, on the balance of play, it was the fairest outcome on a night where Dundalk perhaps lacked the variety Ciarán Kilduff would have offered them off the bench.

Vemmelund’s lead goal – a 10th minute header – was The Lilywhites’ sole shot on target in the first-half. A Michael Duffy free-kick found the head of the Dane, who made no mistake in nodding across goal, and to the net, from six-yards.

Though David McMillan spurned a glorious opportunity to put the visitors ahead five-minutes beforehand, with Duffy again the assistant from the left, Sligo’s opening to the game was a lot more energetic.

Chris Kenny could have put the Bit O’Red ahead inside a minute while Daniel Kearns forced Gary Rogers into a point-blank save.

Rogers was crucial to Dundalk staying on level terms throughout the opening 45 minutes. As the half progressed, and Dundalk continued to offer up possession cheaply, Rogers’ interventions became all the more crucial.

A heavy touch from Brian Gartland – similar to the one which gave Maccabi Tel-Aviv their opener in Netanya in December – allowed Regan Donelon through on goal only for Rogers to produce a ‘Schmeichelesque stop, spreading himself to great effect.

Igiehon’s equaliser was non-surprising, though the manner of it was startling. A wicked cross-come-shot from the forward flew across goal and into the net off the back post. Rogers stood rooted, as did the Dundalk defence, as the Swiss goalscorer wheeled away in celebration of his 24th minute strike.

Referee Graham Kelly was far from pleasing to the locals. And while the Cork whistler looked to be adjudicating affairs to the letter of the law, he did let Dundalk and Sean Gannon off with a big penalty claim.

A bouncing ball appeared to strike the right-back’s hand, while moments later Robbie Benson looked to have felled Craig Roddan on the penalty spot. But, on both occasions, Kelly waved play on with the hosts apoplectic.

Getting to the break on level terms was a positive, however, Dundalk’s overall performance in the first-half would have had Stephen Kenny concerned. Chris Shields was below his usual par in midfield, as was Benson alongside him. Duffy looked the most threatening, though the supply to him was far from plentiful.

Whatever the Dundalk manager said to his troops at half-time had somewhat the desired effect. There was much more intensity to their play with Duffy continuing to be the brightest spark.

Still, clear-cut chances were few and far between. Igiehon – the Sligo goalscorer – actually came closest to giving the visitors the lead for a second time when a Duffy cross hit off the striker before flying narrowly over.

Dylan Connolly was introduced as The Lilywhites sought another attacking option, and his impact was almost immediate. The winger’s cross was perfect for Thomas Stewart to strike, however, the attacker lost his footing when preparing to shoot, as the opportunity went a begging.

McMillan (2) and Vemmelund also had chances, though it was Sligo centre-half Mick Leahy who almost gave Dundalk the points with the last action of the game as his desperate intervention sailed inches wide of the upright with Schlingermann beaten.