'Deep down, I knew I wanted to play with Louth' 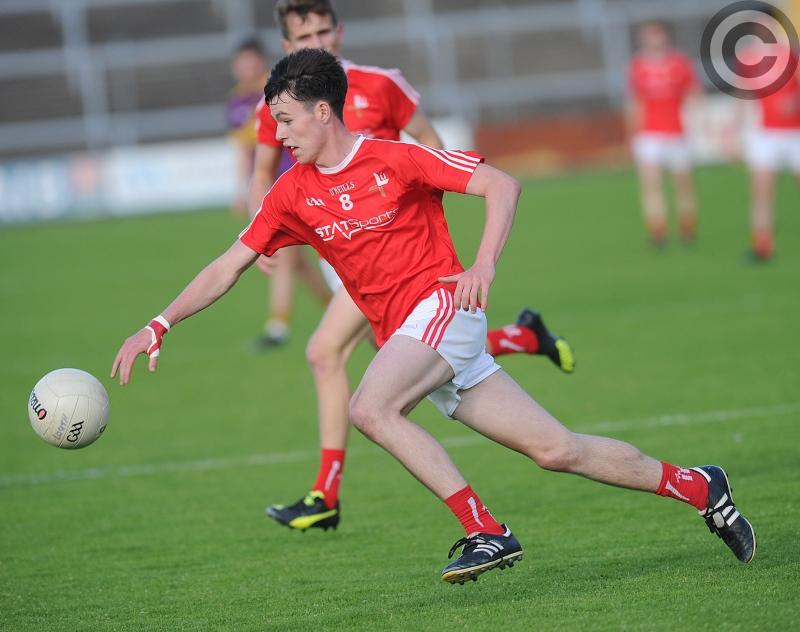 Liam Jackson in action against Wexford in the Leinster semi-final (Pic: Arthur Kinahan)

For a team written off ahead of the championship, the Louth minors have done alright to date. At the heart of their rampage to Croke Park and a date with Dublin has been Liam Jackson.

Manager Wayne Kierans has called the athletic midfielder ‘a revelation’ since he joined the panel and as Jackson explains to the Dundalk Democrat, his fortunes could have been so different.

Faced with the quandary of having to choose a season with the Louth minors or continuing to play with the Dundalk FC u17s, he originally committed to The Lilywhites.

However, deep-down, the Ardee, St. Mary's clubman felt a desire to return to gaelic games and after thrashing it out with his family before approaching Kierans about a possible return, he is now preparing himself for a Leinster showpiece.

“Around November/ December, I got called into the Louth squad after playing fairly well on the Louth Schools team who competed in the Leinster ‘A’.

“But, I’d told Wayne originally that I’d probably opt for the soccer and not play with the minors. He said that I could probably balance both for a while but that come the championship, I’d probably have to commit to one or the other.

“So, as I said, I went the soccer route with Dundalk and Wayne was very understanding about that as was everyone at Dundalk who were great with me, but I knew with the minor age-group changing that I wouldn’t get the opportunity of playing minor with Louth next year.

“I’d never played with Louth before now because I was heavily involved with soccer and I went to the Kennedy and Milk Cups with the Dundalk Schoolboys League.

“I was enjoying the soccer for sure but in my heart I knew I wanted to play for Louth and, as I said, with the minor age changing, I wasn’t going to get the chance again next year.

“Before I decided to go back, I had a conversation with my family about what I was going to do and, around February, I rang Wayne and asked if he’d take me back and the more I think of it, the more I’m thankful for him and the team allowing me back.

“There were no issues in coming back either. I wanted to play gaelic and Dundalk were great about that.

“When I left, I had a chat with the manager, Liam Burns, and he wished me the best of luck so there were definitely no hard feelings there.

“Of course, the decision could have backfired but I don’t regret anything. I’m very happy with my decision to play gaelic over soccer and now I’m just concentrating on getting to and playing at Croke Park.”

Jackson’s decision has proved to be a profitable one, although he never doubted his decision at any stage. His family come across as very supportive, particularly his father, Billy, who Liam credits with a lot of his success.

“I made the decisions myself but my family were always there to support me. My Dad never pushed me towards either soccer or gaelic when I was younger.

“He let me decide myself, he wasn’t going to decide my future and it's great to have somebody like that.

“When I was younger, I decided to play soccer instead and I got the opportunities with the Dundalk Schoolboys League, which were great.

“I was asked throughout the years to play with the underage Louth teams because we were doing well and winning championships with St. Mary’s but I never did which meant my first game in the red jersey was actually against Laois in the first round of the Minor Championship.

“I wasn’t involved in any of the Leinster League games but, despite the results, when I went in training, there was a belief among the lads that we were going to do well.

“There was no talk of what people thought of us because we believed that we were going to go and beat anyone we played.

“The lads had trained hard since November so we weren't just going to accept being written off. No matter who we have played, we have always believed that we could win.”

The break for the Leaving Cert, prior to the Wexford game, was a tough gap to overcome, especially for Jackson who has recently completed his TY year at Ardee CS.

“The break was hard for me personally, especially with the lads doing their Leaving Cert, because we were training in the gym a lot.

“We trained on the pitch on a Saturday and all the lads were there to be fair to them, it was still a tough period though.

“But, coming out of Wexford, with the team, on the bus, it was one of the great feelings.

“It’s hard to explain how great of a feeling it was, and it is, to do so well with lads that you’re great friends with.

“We’re not just doing it for ourselves though. We’re doing this for our county. We really want to do it for Louth on Sunday, to win this outright, and we firmly believe we can,” Jackson quipped.