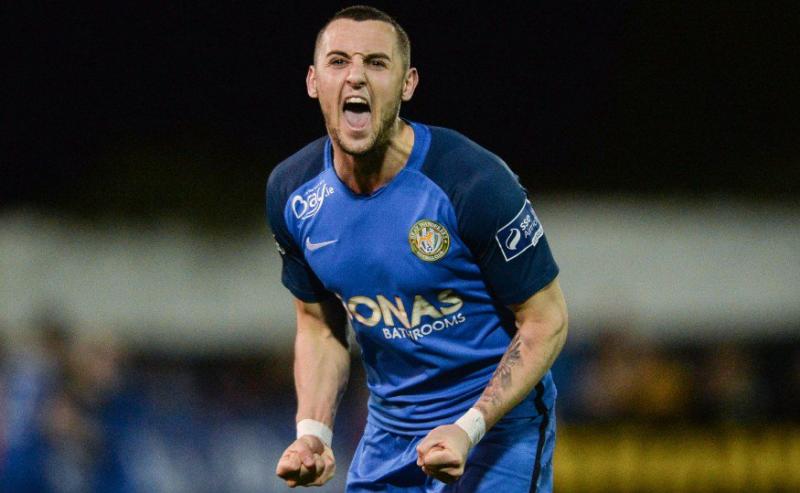 Dundalk put a seven-month transfer saga to bed on Thursday night by announcing the signing of long-time target Dylan Connolly from Bray Wanderers.

The Navan-based winger signs for the Lilywhites for a fee of €35,000 which could rise to €40,000 with add-ons. Connolly has signed a two-and-a-half-year deal with the Lilywhites to become one of the club’s highest earners.

In an exclusive interview with the Dundalk Democrat after signing with the champions, Connolly said: “I’m delighted to get the move done because there was a lot of messing around the last time with Bray looking for such a big sum.

“This time we got it done in about a week which was a lot better because I wanted to join Dundalk.

“Stephen Kenny was the big attraction for me. All you have to do is look at his stature in Irish football to see what a great manager he is and he has a great track record of working with players and helping them along.

“I just couldn’t turn the move down. It was a no brainer for me,” he said.

Connolly then elaborated about the circumstances surrounding his failed move to the champions before the season started. He also called his former employers “cowardly” following Bray’s decision to release a statement on his situation at half-time of Friday night’s SSE Airtricity League Premier Division clash between the sides at the Carlisle Grounds.

On Connolly, the Bray statement read: “Firstly at the start of the season we never received a single offer but we did have enquiries. Those enquiries were less than €100,000, less than €50,000 and less than €25,000.

“Dundalk FC recently made an offer, we discussed it internally at the club, consulted Dylan and his agent and when Dylan said that he was keen to join Dundalk FC, as part of his pathway in developing as a footballer we felt the best interests of all lay in releasing him. And as our statement said, we thank him for his time with us and we wish him every good luck in his future career.”

In response, Connolly added: “I had no input into the negotiations the first time around. I wanted to go but Bray wouldn’t allow me so I stayed until now.

“I found the statement was a bit strange and cowardly to be honest, for them to release a statement at half-time like that, and some of it was untrue as well.

“I don’t know if there were many other clubs looking at me, but Dundalk were the only ones who showed a real interest in me and, to be honest, I didn’t want to join anyone else,” said the 22-year-old.

“I’m not looking to use this as a stepping stone to somewhere else. I want to make it at Dundalk and see where that road takes me. I haven’t spoken to the manager yet about making my debut or anything like that either,” he continued.

“I just want to train hard and show everyone why they paid the money for me and put such faith in me. I have played with Seán Hoare before but none of the other lads so it will be nice to get to know the lads before Europe.

“The Champions League qualifiers are something that I’m really looking forward to because it’s my first time involved at the highest level like that. The aim is to get playing in the team for Europe with qualification through the rounds the obvious target.”

The transfer fee Dundalk are paying Bray is the highest amount spent for a League of Ireland player in a decade, since Drogheda United parted with €80,000, also to Bray, for Eamon Zayed.

That, along with the fact that Connolly may take Daryl Horgan’s former position, doesn’t mean he is feeling under pressure at his new club though.

“I don’t think there is any pressure on me really. The manager has shown the faith in me by spending the money and I’m confident that I can make an impact at the club and show everyone what I’m capable of.

“I’m sure people are expecting big things off me at the club but this idea of replacing other players or Daryl Horgan or any of that, it’s not something that I’ve considered.

“I’m my own man and people will say that Dylan Connolly is this and that and he’s pacey. But I’ve gotten other attributes too. I can score goals and get plenty of assists as well and I’m working on them things all the time. My pace probably stands out and hopefully on the new pitch I can get faster,” he quipped.