At least Wee went down fighting 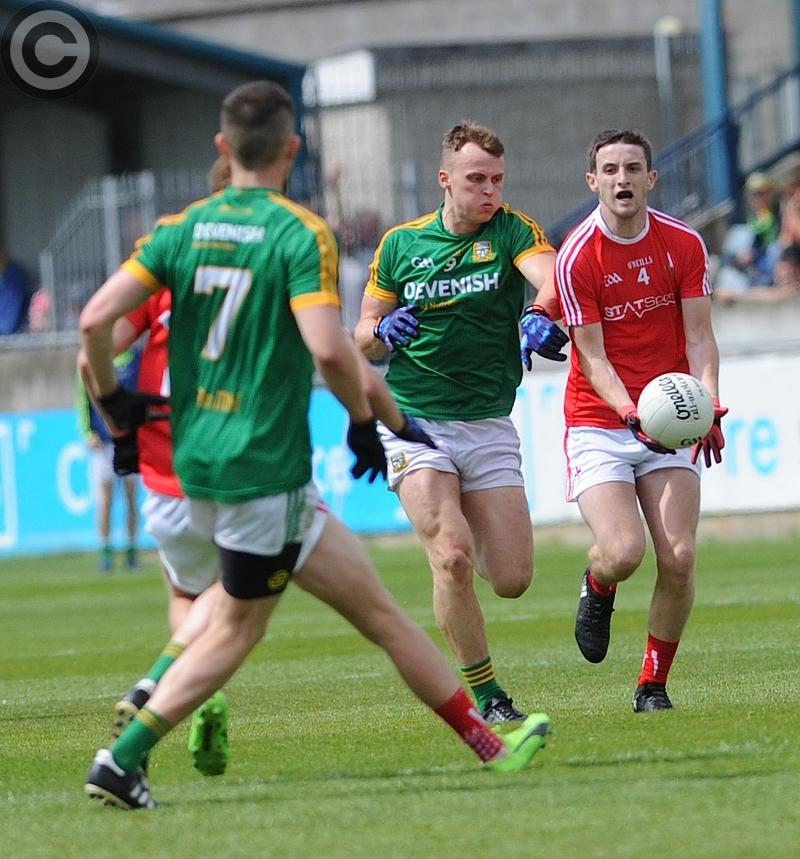 Kevin Carr gets the ball away against Meath on Sunday (Pic: Arthur Kinahan)

There was an elderly gentleman handing out roll of honour sheets as the crowd poured out of Parnell Park on Sunday.

All the All-Ireland football and hurling winners from the 1887 to 1993 were transcribed across the A3 sheets he was offering to passer-bys.

Louth’s victories of 1910, 1912 and 1957 were of course mentioned, however, 1975 seemed a more pertinent year to stew over. After all, that was when the men in red last defeated Meath in a Leinster Championship match.

There have been ‘close shaves’ over the years, none more so than in 2010, of course. In saying that, Louth have been on the receiving end of a fair few hammerings too.

On the scale of close shaves to respectable defeats to drubbings, Sunday may divide opinion. Louth were well in the game for the best part of an hour as Conal McKeever’s 57th minute goal had cut the Royals’ lead to two-points.

However, on each occasion that Louth looked like rallying, Meath imposed themselves and surged back into the ascendancy with captain Graham Reilly their standout man.

The victory was without question what Colin Kelly and his charges had aimed for. Although, I doubt there was anyone from Louth, or Meath for that matter, who would say their entry fee wasn’t well spent.

In an era where blanket defences and over-complicated tactics plague gaelic football as a spectacle, this clash was a breath of fresh air; naïve in some ways, but of a very high standard.

This is not a time to start droning on about how football was the real winner, however, there is some satisfaction to be taken from the fact that Louth went down fighting and playing the right way.

It’s a lot easier to take your beating that way, in contrast to last year where there was quite a bit of head-scratching as the Reds succumbed to Meath with a whimper.

There can be no shame in losing to a better team and Meath are just that. Boasting more pace and poise, the Royals always had Louth at arms’ length.

One aspect of the game where Louth were stronger was when through on goal. The Green and Gold outfit spurned as many as seven clear sightings of the net whereas Louth were clinical when they got their opportunities – McKeever’s goal illustrated as much as he burrowed in from the endline before finishing to the net.

Not even an irrational referee or his attention-seeking linesmen could take from the spectacle as it were.

Derry whistler Barry Cassidy was certainly not the difference between the teams, as has already been established, but he didn’t make life easy for himself with some of his decision-making and constant hesitation.

Two things the GAA should never have introduced; black cards and a five-second advantage rule. If a man has a clear advantage let him free, otherwise just give him the free.

Instead, the game saw whistles blown at extraordinary times. There were instances where players were in the clear only for Cassidy to call them back for the pettiest of means.

Furthermore, his handling of Louth’s 30th minute penalty left quite a lot to be desired. Having put his mouth to the whistle after Anthony Williams had taken a tumble under duress from a Meath defender, Cassidy raised his arm – to imply an advantage or to wave play on? Nobody seemed to know.

In any case, the ball worked its way out to Andy McDonnell whose effort dropped into Paddy O Rourke’s arms. In the process of the Meath custodian catching the ball, Conor McGill manhandled Eoin O’Connor to the ground, and as Meath prepared to breakaway, Cassidy spread his arms.

Was that to be the end of the confusion, you bet not. Who was the guilty party; O’Rourke or McGill? Eventually, after some consultation with his umpires, the Meath full-back was singled out.

For a striking action, a red card is the correct punishment, however, the official’s nightmare continued as he brandished a black card as opposed to a red. The one consolation of the incident was McEneaney slamming the penalty to the net; there was to be no hesitation there.

Cassidy awarded 38 frees in the game and issued Ryan Burns, Bevan Duffy, Patrick Reilly and Andy McDonnell with cautions, when there wasn’t a dirty stroke in the contest. McGill’s black card apart, Meath received zero bookings. Hence, his consistency, with Meath having committed 17 fouls, could be called into question.

Ultimately, though, Louth must look for the reasons behind the defeat elsewhere. While their attack-minded approach was entertaining, they left themselves gaping at the back and had Meath not been so wasteful the net could well have been full by the end.

Although, scoring 20 points from play, and 27 overall, made up for their lack of potency on the goal-scoring front.

Craig Lynch’s difficult spell off the kicking-tee in either half had a big impact as well. 16 of his 36 kick-outs were won by Meath and, although it is out of order to lay all the blame with him, they contributed largely to the Royals purple patches in either half.

They were especially costly in the second-half, and after Ronan Holdcroft’s comical second Louth goal, where Meath kicked nine-points over a 15-minute spell. Three points from James Califf was all the Reds could muster in response – their only three white flags of the second-period.

On reflection, it was a gallant effort by Louth and, even in defeat, one to be relatively proud of. However, Meath’s hex on us Wee men continues…