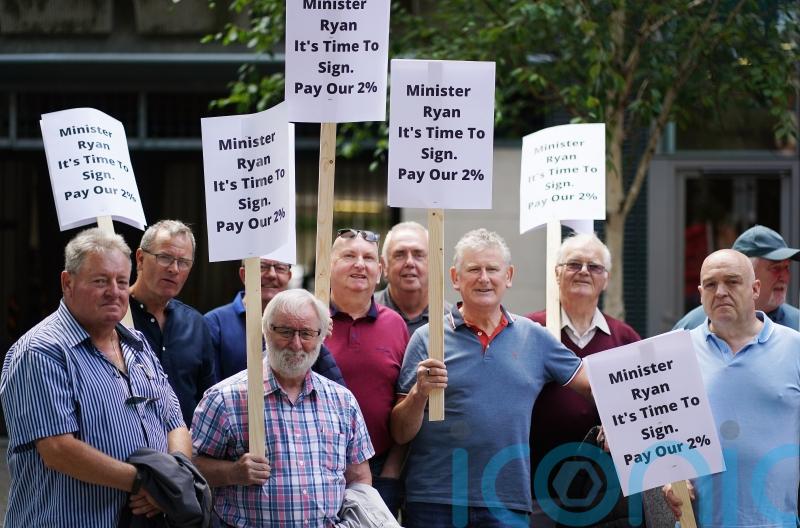 A group of An Post pensioners have held a protest calling for the Government to implement a “lousy” 2% increase in their pensions as agreed.

The retired workers staged the demonstration outside the Department of Environment, Climate and Communications on Wednesday over Minister Eamon Ryan’s “failure” to sign off on the increase due to them since January.

Pensioner Eugene Keenan described the delay in the pension increase as “immoral and unfair”.

He said: “We were granted a 2% rise in January. It hasn’t been paid. More than seven months later we’re still waiting. The 2% would have bought a lot more in January that it would buy now.”

Mr Keenan, who worked for An Post for 40 years, told PA the “buck stops” with the Minister.

“We can blame An Post for a lot of things,” he said. “We can blame them for the amount of money they’re paying: it’s meagre. It’s very poor but Eamon Ryan as Minister is completely to blame for not signing off on it.

“We’re calling on Eamon Ryan to do the right thing and sign off on this and give us our money.”

He added: “We’re calling for the Pension Accord to be scrapped. It’s victimising pensioners who are at the lowest end of the scale and need the money with the increasing cost of living.”

Pensioner Joe Donoghue said no reason had been given to them for the delay.

Mr Donoghue, who recently retired, told PA: “It’s a lousy 2%. Why we have to fight for 2% – it’s crazy. People will think it’s nothing but it’s an awful lot to a pensioner especially the way things are at the moment.”

Pensioner Joe Coady, who worked with An Post for 51 years, said the retired workers had not had a pension increase in over 10 years.

“The pension fund is doing okay so there’s no reason not to sign. We feel hard done by,” he said.

“We shouldn’t have to stand here. It’s no way to treat pensioners. The Minister’s sitting on the fence, he just needs to sign it.”

The pensioners have vowed to continue protesting outside the department every week until the increase is approved.

He said: “There’s skyrocketing inflation at the moment and our pensioners deserve better than to be treated like this.

“Unfortunately there was a disastrous agreement made in 2014 with the An Post group of unions and An Post because the pension fund was in deficit of 200 million euro. The unions came to an agreement called the Pension Accord.

“Since then pensioners have only received a 2.5% pension increase while the staff in An Post have received 13.75%. It’s a disastrous agreement.

“The pension fund is now 580 million euro in profit. The delay paying 2% – and to continue on with that accord – doesn’t make sense whatsoever.”

The spokesman said: “An Post formally sought ministerial approval on 4 May of this year to increase pensions and deferred pensions (for members of the An Post Superannuation Scheme) by 2% per annum.

“In line with the code of practice, NewERA’s views on the current proposal have been sought. This will inform the business case required under DPER Circular 16/2021 (setting out the strategic, policy and financial rationale for providing the increases).

“The consent of the Minister for Public Expenditure and Reform will then be sought.