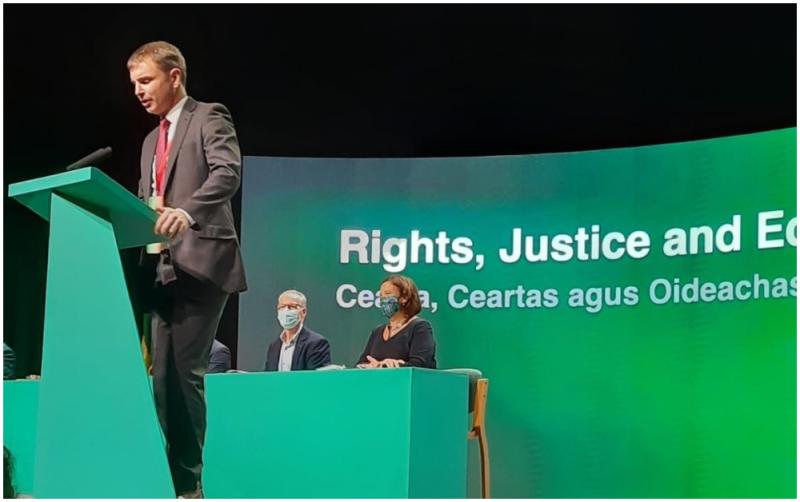 Sinn Féin TD for Louth, Ruairí Ó Murchú backed the proposal for the party to reverse its stance on non-jury courts at the Ard Fhéis last Saturday.

Deputy Ó Murchú said that he was in favour of “modernising” the courts system, which included the need for non-jury courts in “exceptional circumstances”.

Leadership of the party tabled a motion to back the use of non-jury courts “in exceptional circumstances”, with a vote being taken on the motion during last week's Sinn Féin Ard Fhéis.

In his speech at the Ard Fhéis, Deputy Ó Murchú said that the justice system needed to work for the communities that have been “damaged and ravaged by crime, by organised crime and drug dealers.”

“We need a system that can deal with this so that is what we are going to deliver,” said Ó Murchú.

“We accept that the drugs pandemic is across the board, it’s in every socio-economic sector, but the fact is that those who suffer the most, those that deal with day to day criminality are those who live in deprived working-class areas that have been absolutely failed by this State since its inception.”

He added that the Citizens Assembly on drugs reform will help take away the heat that arises from political debate, and it is good to see it within the current Programme for Government.

However, he highlighted that criminal gangs around the country need to be tackled and sufficient resources need to be given to Gardaí.

“We are talking about a courts system where from time to time, people are waiting years for justice, where serious criminals are out on bail.

“It is just not good enough. We need to deliver and I am calling on people to support motion 21.

The motion on the party's stance on non-jury courts was passed by those in attendance at the Ard Fhéis.

Local councillors Antóin Watters and Joanna Byrne also spoke at the Ard Fhéis, which took place in the Helix in Dublin.

Cllr Watters spoke about the impact of illegal dumping.

He called for the party to take a cross-broder approach to take the issue of illegal dumping.

Cllr Joanna Byrne spoke about supporting Retained Firefighters and called for implementation of the EU Working Time Directive for members.