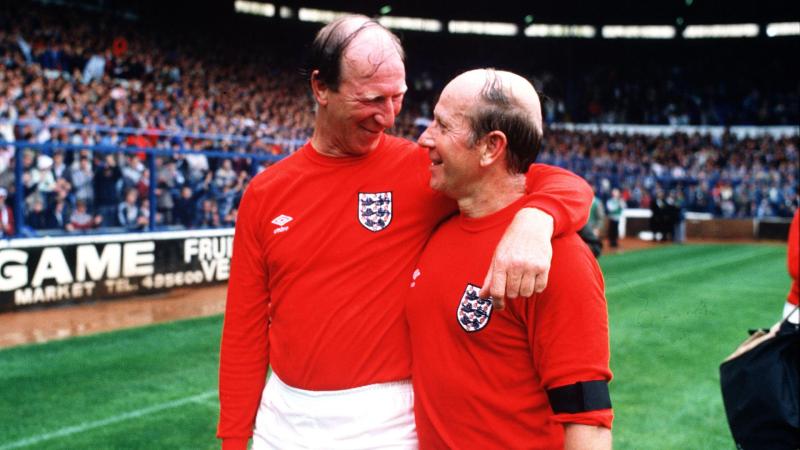 Jack and Bobby Charlton met Joe Carroll some time ago.

It might come as a surprise to those who know I’m not a paid-up or even an associate member of the soccer family that I’ve met the Charlton brothers, Jack and Bobby. I should say straight away that though my first love is the GAA, I’m not an ‘anti’, or anything like it, when it comes to the head-the-ball game.

I watch games on telly, have seen Dundalk win an FAI Cup final, sold programmes outside Oriel, and played for Arsenal, the name given to the underage outfit run by a wonderful man, Frank Whitmarsh, many years ago.

Then, at a time when GAA players hadn’t to look over their shoulder to see who might be looking on, or worry about their names appearing in the ’paper, I played in what could loosely be called representative matches. One was against Dublin Printers, who had the red-haired future Stoke City stalwart and Republic of Ireland international in their line-up, one Terry Conroy.

On the other occasion I wore the Dundalk Printers colours (whatever they were), a team from The Irish News proved too good for us in a game played at The Mill Road.

Like many others, I began to lean towards Manchester United after the Munich Disaster, and have been looking out for their results ever since. But I don’t get into bad form if they are beaten, and if you ever hear me referring to the Red Devils as ‘us’, or ‘we’, or ‘our’, it’s only because I’m competing with other team followers in a mock battle. (Well, it is to me anyway.)

I can’t say my meetings with the Charltons were the happiest of experiences, but would have to admit it was my attempt at humour that was responsible for the Jack encounter lasting no more than a matter of seconds.

He was the special guest at the opening of a new travel agency in town when he was at the height of his managerial powers. I was also invited along. When he arrived he made straight for where I was standing, and to break the ice I said something like, “There’s going to be no talk about David O’Leary here tonight”.

With that the big man nearly exploded. He was having his issues with the Arsenal centre-half at the time, and making me the victim of that famous glare of his told me in no uncertain terms: “I’ll stand here with you all night and talk to you as much as you want about O’Leary”.

Eamonn Hiney was standing nearby, which was maybe just as well for me. Hearing what I’d said, the sadly-missed former Dundalk chairman was in quickly to bail me out. “He’s only pulling your leg, Jack.”

I slunk into the background and Jack went away to enjoy better company.

The word was out that Jack’s brother would be in Dundalk to conduct a coaching course at what’s now the DkIT grounds. My father had two great sporting heroes, Bobby Charlton – ‘Boblet’, as he called him – and Stephen White. He had seen White playing on many, many occasions with Young Irelands, Louth and Leinster, but had it not been for television he’d never have eyed Bobby Charlton. On hearing the Man U icon would be in town he just had to be there and I was the one to do the driving.

I’d only put on the handbrake when ‘Boblet’ came along, heading for the pitch. He was on his own, carrying a sack of footballs. Handshakes with my father’s unsmiling hero over, a chap came along wanting to know if he could take a photo.

“Come on, hurry up,” Bobby said rather gruffly, “I’ve a training session to go to.”

Delighted to have met his hero, but still taken slightly aback, my father asked: “He wasn’t in the best of form, was he?”

Back to Jack. On coming to Ireland he soon developed a friendship with a long-time Carrick Road neighbour of my father. The still hale and hearty Des Casey was FAI President at the time of Charlton’s appointment as Republic of Ireland manager, but more than that, it was he and Dr Tony O’Neill who had been delegated by the FAI to find a replacement for Eoin Hand.

In a question-and-answer piece with Inside Track seven years ago, Des told the story of the run-up to the big Geordie getting the job.

“We had high hopes of qualifying for the 1986 World Cup finals after beating the Soviet Union 1-0 in the first match. Denmark, Norway and Switzerland were the other teams in our group, but when it came down to the second-last match we were in a position where we had to beat the Soviet Union again, this time away from home. We lost 2-0, and when we were beaten in the final match by Denmark it was decided to find a replacement for Eoin Hand. The Executive chose myself and Dr Tony to suss out suitable candidates.”

What was the criteria?

“We had seen how Northern Ireland had qualified for the World Cup in 1982 and again four years later having a manager, Billy Bingham, who was living and working in England. So the first thing Dr Tony and I did was to head to England. I’d been told by a friend of mine from Newcastle Jack might be interested. He was the first we met, but in a hectic weekend of travelling he was only one of many.”

Did Charlton impress you?

“Very much, in particular with his knowledge of the players at Ireland’s disposal. He felt that with the panel available, Ireland could make it to the 1988 European finals and the World Cup after that.”

What about the others?

“Pat Crerand was mad keen on the job, but so also were the others we met – John Giles, who was living in Birmingham, Terry Neill, Gordon Lee, Noel Cantwell and Billy McNeill, who was then manager of Manchester City. At home we had Liam Tuohy, Paddy Mulligan, and that great Oriel favourite, Jim McLaughlin.”

Who was in the final shake-up?

“Initially, Charlton, McNeill and Giles. The idea of McNeill doing the job while continuing to manage Man City was appealing to the FAI, but he was soon ruled out when we heard how prohibitive the Maine Road board’s terms were.”

So it was down to Charlton and Giles?

“Liam Tuohy re-entered the fray when McNeill was ruled out, but then almost out of nowhere, Bob Paisley, the former Liverpool manager, came into the reckoning. To make a long story short, Charlton got the nod, and, as they say, the rest is history.”

“What do you think? Qualification for a European and two World Cup finals, and beaten in a play-off for another European, all in the space of 10 years? It was certainly a great era in Irish football.”

Des and Big Jack remained great friends, as did their wives. Indeed, I was on a visit to McDermott’s Terrace one day when I saw the Charltons coming out of the Casey house. The thought of going over to reacquaint with the big man was only fleeting.