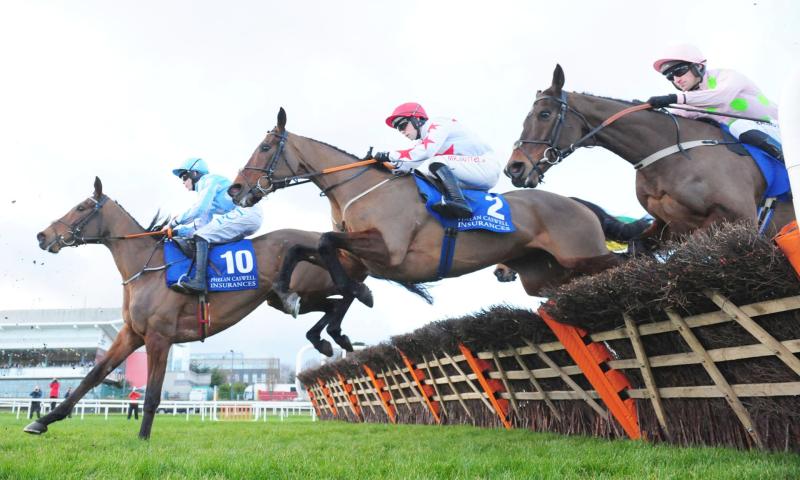 Probably not since the 1957 All-Ireland final has there been such a Louth interest in what you might call an away fixture.

Darver Star goes in the Champion Hurdle at Cheltenham this Tuesday afternoon, and it’s not only those who have a few quid laid out on the bay gelding who’ll be glued to the telly when the Starter calls them in at around 3:30. He’s a local horse who’s caught the sporting public’s imagination like no other before him, and all will want to see how he fares out in what is the world’s most prestigious hurdle race.

As is well known by now, Darver Star is owned by three mid-Louth men, Simon Fagan, Pat Cluskey and Seán Fanning. The latter pair bred the eight-year-old and have been a long time in the racing game but it’s Fagan who’s probably best known by the wider public. This is because his picture was all over the ’papers and on television screens seven years ago after his numbers had come up in the Lottery, netting him €3.6 million. If it’s luck that’s needed, and it does come in handy, then it’s good to have someone like Simon on the team.

By the way, there’s a connection between the Louth ’57 team and Darver. Jimmy McDonnell was at full-forward in Louth’s defeat of Cork, and in brackets beside his name was his club team, Darver Volunteers. The flags were out throughout the county all those years ago and will be again if this other local star is successful.

This might surprise regular readers of this page: I won’t be laying out anything on the Gavin Cromwell-trained horse this afternoon. Yes, I’ve been in the horse’s corner almost from the start, writing bits about him even when he was neither popular nor profitable to be following. Cluskey, who had huge faith in the horse all along, was keeping me up to speed and, as we say in this game, I got a nice bit of copy out of it.

I share his part-owner’s faith; I think Darver ran an incredible race last time out at Leopardstown, his performance that day was much, much better than he was given credit for on television and in the trade ’papers. If all goes well throughout the race he should be there or thereabouts.

No, it’s just that I don’t want to put the hex on the horse. I’m on that bad of a run lately that I could paper the bookie’s office where I bet many times over with spent dockets. I’m beginning to think I might be told some day that my trade is no longer required – we feel it’s unfair that anyone should be betting so many losers (Some chance!!). Last Friday, for instance, I was on Arian at Fos Llas – seven lengths clear going to the last, he buckled over. If I wasn’t so used to this sort of thing I might have to buy a new telly to see today’s race.

But I’ll be shouting for Darver, hoping his star shines on the biggest stage of all. He carries the Louth red-and-white colours, and should they be in view on the climb to the finish-line, I’ll be joining in a Louth cheer, which might just be louder than the one that went up when Seán Cunningham put the ball in the net 63 years ago.