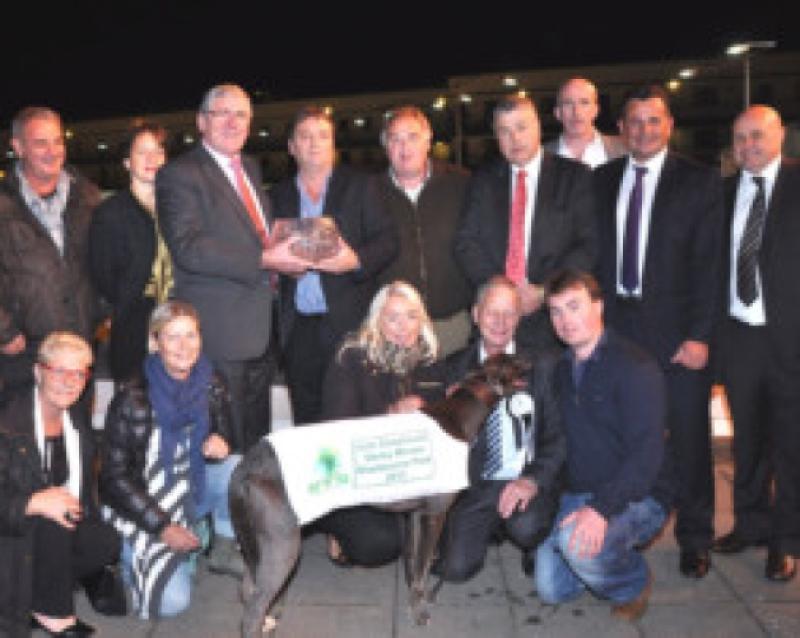 LARRY DUNNE brought a first-ever Irish Greyhound Derby win to Louth, his Slippery Robert running a blinder to win the country’s premier Classic at Shelbourne Park. Though there was a prize of €125,000 on offer, this legendary Jenkinstown-based punter-cum-owner/trainer/breeder couldn’t let the occasion go by without having a tilt at the ring. His return from the 5/1 shot was his biggest-ever.

LARRY DUNNE brought a first-ever Irish Greyhound Derby win to Louth, his Slippery Robert running a blinder to win the country’s premier Classic at Shelbourne Park. Though there was a prize of €125,000 on offer, this legendary Jenkinstown-based punter-cum-owner/trainer/breeder couldn’t let the occasion go by without having a tilt at the ring. His return from the 5/1 shot was his biggest-ever.

Did you ever believe you could win greyhound racing’s biggest prize?

It’s something everyone in the game dreams of; it’s what keeps many going, I suppose. I’ve tried for it in the past and had no luck, but I thought that this year we might do something.

Now that it has happened?

It’s unreal. The race and the aftermath were a bit of a blur, but since then I’ve had a chance to absorb the enormity of it all. I’ve watched a recording of the race over and over again, and it has lost none of its appeal, I can tell you.

You had two running on the night?

Slippery Robert in the big race and Slippery Sooty in the consolation final. ‘Sooty’, who’s kennelled at Jenkinstown, ran great throughout the competition, and did well to reach the semi-finals. Unfortunately he was no match for Borna Gem in the consolation.

Where did you watch the big race from?

The stand, where I watch most of the races at Shelbourne.

When did you think the race was yours?

I thought ‘Robert’ was ideally placed going into the back straight. He didn’t break all that well, but was well up at the first bend, close to the pacesetter, Cabra Buck. When he joined the leader down the back I thought we had a chance. The two of them were wide, but there was no real movement from any of the ones on the inside. He made his move early in the home straight, and to answer your question, I felt it was ours a few hundred yards from the line.

It must give your extra satisfaction to also be Slippery Robert’s breeder?

Yes - and I also bred Steamy Windows (‘Robert’s’ mum), from a bitch by the name of Cosy Feet. Both were good on the track, but unfortunately had their careers cut short by injury.

You’re renowned as a punter, one who can strike fear into the heart of the bookies – did you take a bet on the final?

Yes, and without going into detail, ‘Robert’ gave me my greatest-ever return.

Didn’t matter. I thought the dog had a great chance, and as I always back my own judgement, I wasn’t going to let opportunity pass by. I did my business before racing

‘Robert’ is trained by Robert Gleeson – who is he?

He’s from Rathangan in Co Kildare, and though just 25 is not short of experience or pedigree. His father, Mick, has been in the game for a long time, and the well-known Reggie Roberts is another of his mentors.

A friend of mine in Dublin. I had reason to reduce my kennel strength and I sent four down to Robert.

The photos show there must have been hundreds around the podium. There was a party afterwards, but I didn’t go. I haven’t taken a drink in 25 years, and big as the occasion was, I wasn’t going to change anything. I came home and had a cup of tea and sandwich and watched the race several times. There have been a few get-togethers since and a few more are planned.

What next for the champion?

We’ll give him a rest and then aim him for one of the races on the big Night of the Stars meeting at Shelbourne in a few months time.

This wasn’t your first Classic success?

I trained Sycamore Dan to win the first running of the Irish Sprint Cup at Dundalk, and owned Axle Grease, who won the Irish Oaks when trained by Ollie Bray in Navan.

You’ve also had another major victory, one that’s been away from the race track?

I take it you’re talking about me overcoming illness. I was diagnosed with prostrate cancer last October and underwent an operation in February. On my last visit to the consultant I was given the all-clear. When all is said and done, that was my best-ever result.

Who spearheads your training operation at Jenkinstown?

Aidan Finnegan, who, before becoming involved in the greyhounds, worked in my meat business in Sweden. He’s totally dedicated and does a great job. My brother, David, is also involved. We breed our own, and never keep more than about a half-dozen racers.

How long have you been in the greyhound game?

For as long as I can remember. My late father, Gerry, who was a Department vet attached to the old bacon factory in Dundalk, always kept a few greyhounds, running them at Dundalk and Navan, and, if they were good enough, Shelbourne. I helped walk and gallop them. Glenbawn Magpie was his best, a very reliable sort.

Were you a punter then?

Yes, betting with the likes of Harry Barry, Gerry Lawless and Paddy O’Neill at Dundalk. There was a great buzz about the old Dundalk track on the Ramparts, especially on Saturday nights.

There’s a need to get the younger people involved, not only in coming to the races, but in training and breeding.

The best greyhound you’ve seen (other than Slippery Robert)?

The Tyrurs, Big Mike and McGuigan, two great ones to have a bet on. College Causeway and Premier Fantasy were fliers.

Do you bet the horses?

Yes, I’ll take a bet there, but only if the odds are good. I wouldn’t have a bet on a game’s outcome, but maybe on first goalscorer, or on a double result, half-time leader and winner. That sort of thing.

Are you a reader?

Haven’t got time. I’ll read the newspapers and the formbook, of course, but nothing else.

Learn to listen, and listen to learn.

Your ambition must surely be to win another Derby?

No, to stay healthy.