INSIDE TRACK | Disaster! Finding a place on a Democrat sports headline might not be such a good idea 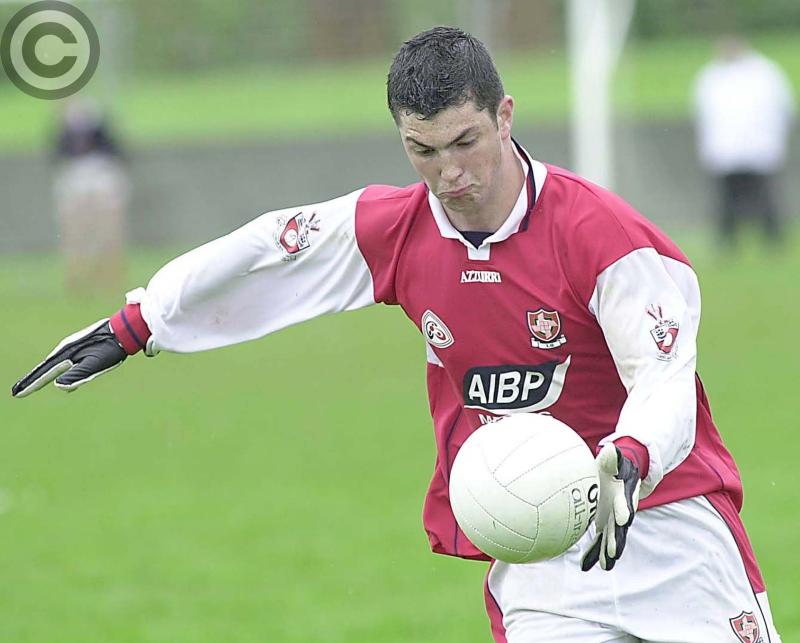 Rob Kearney in action for the Louth minors in 2003. He missed out on Ireland's opening match of the Rugby World Cup due to injury. (Pic: Arthur Kinahan)

Finding a place on a Democrat sports headline might not be such a good idea. Two issues ago, Rob Kearney was lauded in big print for making the Ireland Rugby World squad, and then last week, the greyhound, Our Surprise, was given deserved recognition after running brilliantly in the penultimate round to qualify for the Irish Derby final.

What is known by those with an eye on the goings-on in Japan, Kearney succumbed to an injury he had picked up in training, ruling him out of Sunday’s game with Scotland.

Inside Track’s focus on rugby in the more than 15 years since the page first appeared has mainly centred on the international careers of Kearney, his brother Dave and Devin Toner. There was a time when press passes for about a half-dozen matches, in The Aviva and Croke Park, came this way courtesy of the IRFU, and that provided some other grist to the page’s mill. But even in those pieces there would be more than a passing reference to the Cooley Connection if any of them was involved.

However, while Sunday’s game was missing a vital ingredient, it was still worth seeing. Ireland declared their intentions early on and in the end were easy winners, claiming a victory which, according to the pundits, all but guarantees Joe Schmidt’s team a place in the knockout stages. It would seem, therefore, that the easy part is coming up over the next few weeks. After that comes the big stuff. By then, hopefully, the Cooley Connection is back in working order.

Greyhound racing isn’t the country’s most watched, or, indeed, most-loved sport – RTÉ television’s recent one-sided programme has, seemingly, succeeded in what it set out to do, give the sport a bad name, to the point where there are now 20 percent fewer attending meetings than there were pre-screening. But there’s been a fightback; a complaint has been made by Bord na gCon to the Broadcasting Authority over the programme’s content.

The greyhound game has its history, its major prizes, its personalities, its canine stars. The biggest prize, competed for annually, is the Derby. This has prestige as well as a huge monetary value attached, and Brian and Laurence Jones were within touching distance of it until they were dealt the lousiest of hands.

The Carrickmacross-born brothers realised a long-held ambition when their dog, Heisman, won the Irish Sprint Cup at Dundalk Stadium a two years ago. This is a Classic which annually attracts the cream of the country’s short-distance runners, and winning it - in spectacular fashion - gave the lads and their families the thrill of their lives.

The possibility of things being even better at Shelbourne on Saturday night last was real. Our Surprise, born, bred, reared and trained in Corduff, just outside Carrick, improved as the six-round premium Classic progressed, running his best race in the semi-final. He recorded a time equal to the fastest on the night, and having drawn the four sheet, was perfectly housed for the decider with its €140,000 first prize.

Owners and trainers throughout the country can identify with the disappointment experienced by the lads when their charge was found to be injured the morning after his splendid semi-final triumph. Few others’ setback would have been as acute as the lads’, however. The injury to Our Surprise was so severe, his withdrawal from the decider couldn’t be avoided. Hopefully, there’ll be another day for Our Surprise and connections.

In the absence of the Jones runner, the majority of local support switched to Killmacdonagh, who was taking a shot at history, attempting to become the first to win the county’s top Classics, the Derby and Oaks. The Cork tracker also won the Dundalk International this summer, but her attempt at the treble fell short, the daughter of Zero Ten failing to show her usual back straight zip.

Victory went to the favourite, Lenson Bocko, who made it across the line just a head clear of Boylesports King, who was running for competition sponsor, John Boyle.

While there was much annoyance in the greyhound industry with the content and the presentation of the RTÉ Investigates programme a few weeks ago, the national broadcaster’s live coverage from Shelbourne Park last Saturday night, showing the game in a positive light, was well received. It captured a night on which the enclosures were packed, the atmosphere “unreal”, in the words of a Derby night veteran.