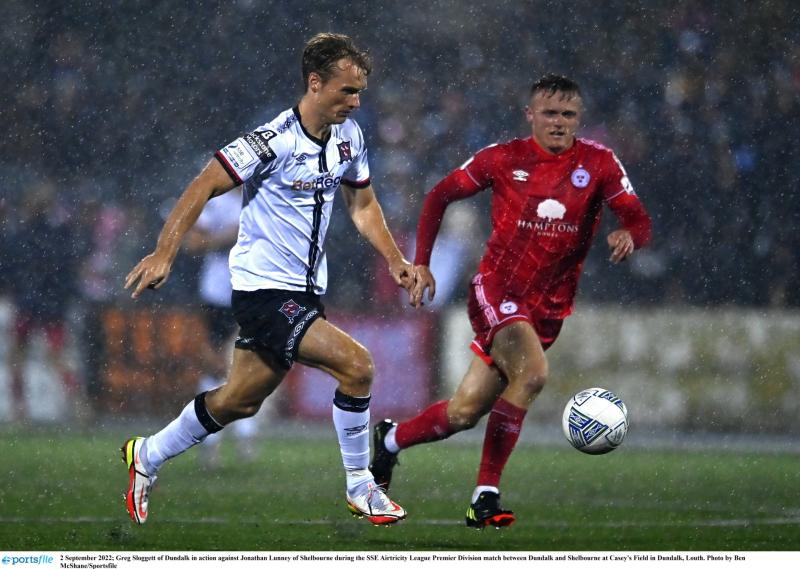 Greg Sloggett of Dundalk in action against Jonathan Lunney of Shelbourne. (Pic: Sportsfile)

It’s now three games without a victory for Dundalk FC in the SSE Airtricity League after they were held to a scoreless draw by Shelbourne at Casey’s Field in front of the RTE cameras on Friday night.

Shels started well and had the game’s first chance inside eight minutes through Shane Farrell, who raced down the right before forcing a good save out of Nathan Shepperd.

The Dundalk goalkeeper eventually got hold of Jack Moylan’s effort at the second attempt after the lively Shels midfielder had danced his way around John Mountney.

It took 25 minutes for The Lilywhites to create any sort of opening; that came through Steven Bradley, who weaved away from Conor Kane before curling over the crossbar.

At the other end, Kane’s shot from distance fizzed wide of Shepperd’s near post, but the home side began to assert their dominance throughout the remainder of the first half.

Gavin Molloy’s pass across the box almost proved disastrous for Shels, as John Martin snuck in ahead of the hesitant Luke Byrne, skewing just wide of Brendan Clarke’s goal.

Playing in an unconventional left-back role, Mountney had a long-range attempt pushed over by Shels stopper Clarke, shortly before Keith Ward floated a free-kick off target.

Dundalk had a blatant penalty appeal turned away when Jonathan Lunney’s loose pass went straight to Ward, who raced through on goal before being brought down by Byrne.

In the second half, Stephen O’Donnell’s side picked up where they left off, with a Ward set-piece delivery from the left being diverted onto the bar by the head of Mountney.

Ryan O’Kane has been superb for Dundalk of late, and the local talent created space for himself before firing a decent shot down the throat of Clarke from just outside the box.

At the opposite end, seconds after Farrell went down under the challenge of O’Kane inside the area, Matthew Smith showed great composure, and his shot went through the legs of Sam Bone before being kept out by the outstretched left boot of Shepperd.

The Lilywhites should have took all three points on 87 minutes when Paul Doyle slipped David McMillan through on goal, but Clarke rescued Shels with a magnificent stop.

Seven minutes of stoppage-time were played at Casey’s Field after Shels left-back Kane had to be stretchered off late on after sustaining what looked to be a serious injury.

The Commentary Box: A look back on the life and legacy of the legendary Des Casey