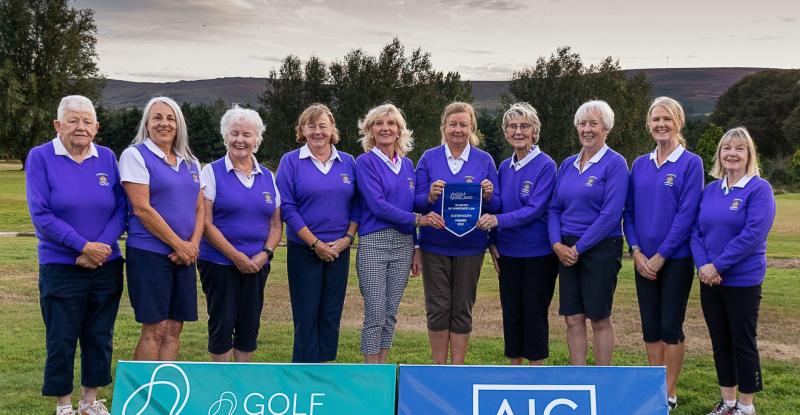 The Mannan Castle AIG Intermediate Cup pose with the Ulster South Pennant, which was won following their victory over Belvoir Park

There was no catching Vincent Duffy in the fight for the Monthly medal as he produced a fantastic nett 62. Vincent had an amazing seven net birdies and two net eagles for his round.

Second place went to the stylish Martin Donaghy with the highlight of his round a fantastic birdie two on the long par 3 tenth. Michael McCartan took third place with a very steady round to finish up on a nett 68.

The gross went to Conor Farrelly with a superb 3 over par round. Conor never really got himself in much bother going around Mannan, which in itself is no easy task. He had two great birdies on seven and thirteen.

Mannan Castle golf course was in great condition for the 9-hole Seniors competition. Some good scoring was to be expected, but David Murphy excelled with 24 points thanks to 16 points in his final four holes.

This included 2 birdies and 2 pars, his nearest rival on the day was his playing partner Donal McArdle with 20 points.

Despite a bit of a shaky start, Denise McGuinness soon found cruise control, producing a measured round of golf with three pars and a strong back nine to chalk up her second win in August.

Fresh from success with the Ulster South Intermediate Cup winning team, three pars and a timely birdie on the 17th hoisted Rita O'Loughlin into second place on countback from Anne Fleming who enjoyed a very good day on the fairways to take third spot.

Many thanks to Patricia The Hairdresser 'Boutique Salon' Dundalk Road, Carrickmacross for her continued sponsorship and support of the Ladies Club, which we greatly appreciate.

On Saturday, we had the second annual Sadie Larkin Memorial Scramble. Sadie Larkin was a beautiful person, you just had to meet Sadie once and you would you not forget her.

Sadie loved playing golf, one of her many hobbies and she always said that golf should be fun, so a scramble is most fun you can have on the golf course.

We all miss Sadie, but we are grateful that her family joined us in the clubhouse to present the larger-than-life trophy (just like Sadie) to the winning team.  The weather co-operated and stories were shared, and memories recalled.

We were honoured to be joined by Sadie's daughters Angela and Kathleen, her sons Barry and Declan and her grandchildren, Ava, Kelly, Tara Aron, Cillian and Michael.

The entire family made the presentation to the winners. The winning Team keeps the Cup for the year and many thanks to John Joe Cunningham for sponsoring the other prizes.

Gill Rouiller made a presentation to the family and returned a beautiful painting that Sadie painted of Mannan Castle back to the family.

On the inter club scene it has been a great time of late for Mannan Castle, as the AIG Intermediate Cup team brought home the Ulster South Pennant, beating Belvior Park GC in the final.

Team Captain Esther Durcan and her team wanted thanks the fantastic supporters and caddies. It was brilliant to see so many Mannan Castle members and friends out on the course.

Thanks to Warrenpoint Golf Club for their support and hospitality. Next up we are heading to Knightsbrook Golf Club on the 15th -18th September for the All-Ireland Quarter Finals.