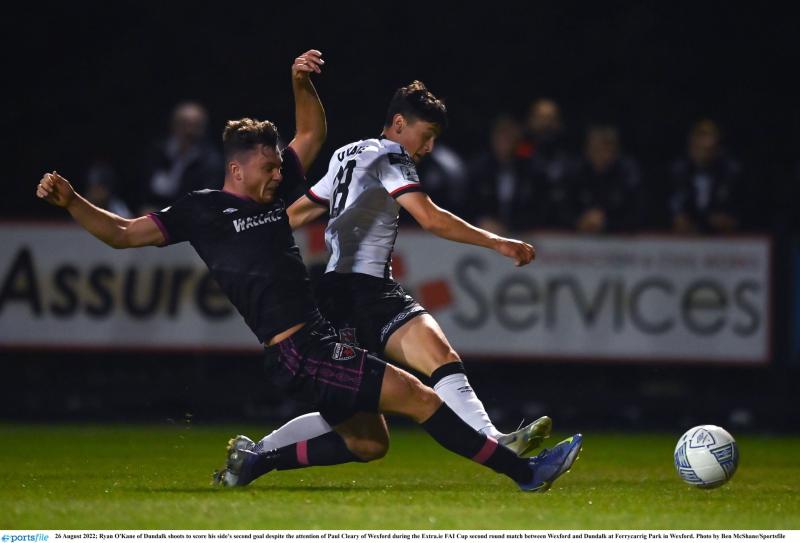 Ryan O'Kane in action for the Lilywhites against Wexford in the FAI Cup. (Pic: Sportsfile)

Stephen O’Donnell hailed the impact of Ryan O’Kane after the 19-year-old produced a scintillating goal to keep Dundalk FC in the Extra.ie FAI Cup last Friday night in Wexford.

The Lilywhites were 2-1 down against a spirited Wexford side with less than 20 minutes remaining before O’Kane, not long off the substitute’s bench, scored a goal to remember.

It felt like a coming of age for the Ardee Road native, who hadn’t before netted for the club, but his moment of sheer brilliance proved pivotal, as Dundalk subsequently ran out 3-2 winners after extra-time to secure a place in Tuesday evening’s quarter-final draw.

“It was a great goal,” enthused O’Donnell afterwards. “I thought he was actually quite good last Sunday (against Shamrock Rovers). We just wanted to change things up at half-time. He’s been very good over the last few weeks.

“He came on, made a real impact and showed really good quality. He stood the defender up, burst by him and it was a great finish with his left foot in the bottom corner.

“It doesn’t matter what age you are. He came on with the mindset that he wanted to be a difference-maker. We were up against it at that stage, 2-1 down and Ryan took it on and that’s a great sign of a young player.

O’Kane, who made his senior bow for former club Warrenpoint Town at the age of just 15, has frequently impressed when summoned by head coach O’Donnell, but a first goal in his 21st competitive outing for the club has added a most welcome feather to his cap.

“He’s shown a lot of improvement,” added O’Donnell. “In pre-season, was I realistically thinking that he would be in around our plans? Probably not, but over the first half of the season, he has put himself to the forefront of our minds.

“The way he’s training, the way he played at U19 level and just by his receptiveness and taking on board information. You’re seeing that now over the last month or so in his first-team appearances.

“He’s looking a real threat and when he gets you one-on-one in that final third, he can score a goal, he can go both ways and he can bang off both feet. He has a very low centre of gravity and he’s very sharp. He has a lot going for him.”

O’Kane represented Bellurgan United in the Dundalk Schoolboys League and was part of the league's representative team, earning the Super Cup NI (formerly Milk Cup) Junior Player of the Tournament award in 2018 after scoring three times throughout five appearances.

Four years later, he’s making waves in the FAI Cup, with the second-round goal against Wexford adding nicely to the assist he got versus Longford Town in the opening match.

“He has the whole concept of the game to learn. He’s playing senior football now. We want to play a certain way and he’s very receptive. You can see now in his movements that he’s taken it on board and he’s looking a real threat.

“He came on when it was 0-0 against Longford and then all of a sudden within ten minutes, we were 4-0 up, so he had a massive impact in the last round as well.”

O’Kane will be hoping to carry his FAI Cup form into the SSE Airtricity League as Dundalk host Shelbourne at Oriel Park this coming Friday night (kick-off, 7.45pm).

That fixture will be officiated by Damien MacGraith (Mayo) and can watched live and free-to-air on RTÉ Television, with coverage beginning at 7.30pm from Oriel.