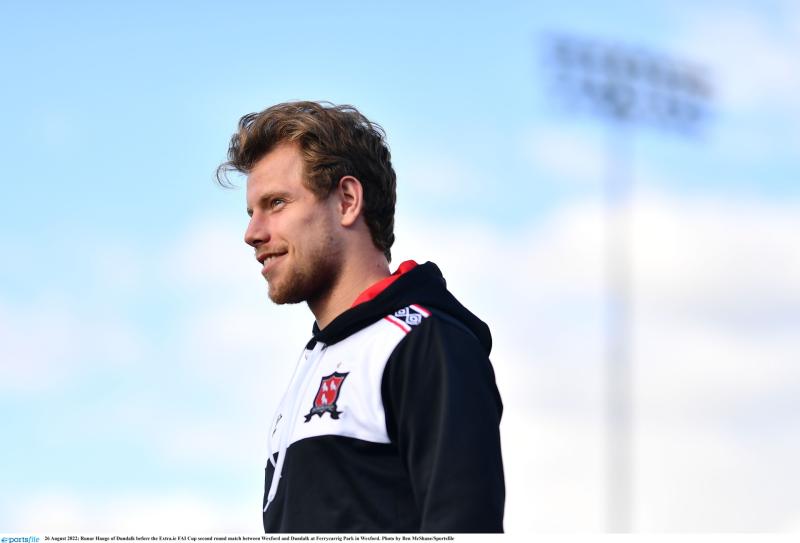 Runar Hauge of Dundalk before the Extra.ie FAI Cup second round match between Wexford and Dundalk at Ferrycarrig Park. (Photo by Ben McShane/Sportsfile)

Norwegian winger Runar Hauge is settling nicely into life at Dundalk FC since joining the club on a six-month loan deal from Scottish Premiership side Hibernian.

Hauge, who turned 21 yesterday, will be at Oriel Park until the end of the current campaign and believes that he is adapting well to life in the SSE Airtricity League.

Speaking after Dundalk’s win over Wexford in the Extra.ie FAI Cup last Friday, he said: “In our team, there are lots of good players and we are training hard.

“There is good quality and also tough trainings, but I am settling in better and better over the few weeks. Now, I think I’m ready to go and step it up hopefully play more and more.”

Football is a way of life in the Hauge household, with his older brother, Jens Petter, formerly of AC Milan and a Europa League winner with Eintracht Frankfurt last season.

Their younger sister, Thale, is only 15, but has already played professionally for IK Grand Bodo, while their father, Jan Ingvald, also togged out in the Norwegian Third Division.

Prior to his latest move, Runar says that his own League of Ireland knowledge was limited, but had previously watched his Hibernian teammate, Steven Bradley, in action.

“I didn’t know much,” he admitted. “I watched the first three games of Dundalk, when Stevie scored all those goals, so I had a bit of an impression of what was waiting for me.

“It’s always a bit of a shock when you come to a new team and a new league, and you train in a new way and you play in a new way. It’s not easy, but that’s the way it is in football.

“You just have to adapt and I feel I have adapted well. You just need to do what the gaffer wants you to do and now I’m trying to do what he wants.”

Hauge started out at Bodo/Glimt and was part of a league-winning side in 2020 before signing for Hibernian at the start of the year, playing two games for them last term.

“Irish and Scottish football is quite alike, but there’s a big difference from Norwegian football. It’s taken some time to settle in, but I feel like the game suits me. I know that I have ability that’s good enough to show things in this league.”

And, what about the town of Dundalk? Well, Hauge has been keeping the ever-growing local café trade satisfied, so don’t be surprised if you spot the Norwegian out and about.

“I’m staying with a few of the boys in a house the club is renting. I like the town centre, it’s nice. There is quite a few nice coffee shops and I’ve been to a few of them, so it’s nice.”