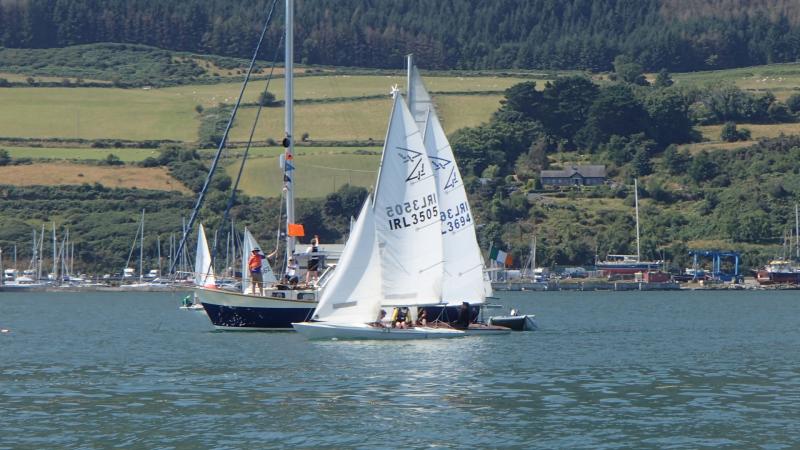 The Moneley Oyster Pearl Regatta was run last Saturday, reflecting the past hugely successful event which attracted over a hundred boats from around the British Isles and Ireland.

With line honours in all four races, Humdinger, skippered by John Conlon (Arklow SC) and his able crew, showed the rest of the fleet a clean pair of heels with Supersonic and J’zus Outhaul taking second and third respectively in the Echo908 class. Brian Dempsey (Arklow SC) won the CPH class in his flying J 92, J‘zus Outhaul.

An enjoyable presentation ceremony took place at Carlingford Marina, courtesy of the Moneley family who generously sponsored the event.

It was agreed that the success of this year’s event would help to re-establish the Oyster Pearl as the premier cruiser regatta on Carlingford Lough.

Next Saturday, the fleet competes in the Warrenpoint Regatta for the Whistledown Trophy.

As an open event, all cruisers in Carlingford Lough are invited to take part. Details and entry forms are available on CLYC website – www.clyc.info

Racing was also held for the dinghy fleet on a course stretching from Carlingford Marina to the mouth of Carlingford harbour.

The event combined the single and double handed boats, with the results for each race being decided by the average lap time for each boat.

The wind was light and variable in the morning but as the sun shone down and heated the land a steady sea breeze filled in allowing the race officer to set a course for the competitors who had waited patiently floating around for an hour.

The light airs meant that tactics and skilled sail handling really came to the fore as each competitor worked to get the maximum from their boat. The leads changed frequently during the races and the final positions came down to the wire with seconds separating winners in each race.

The first race was dominated by the Flying 15s with first place going to Diarmuid and Aine Gorman, second to Jim Garvey and Johnny Duffy and third to Stephen Callan and Marcos Simpson.

The single handers fought back in the second race with the honours going to Fiachra McCormick in first, second to Diarmuid and Aine, and Donal McCormick taking third.

This left it all to play for in the third and final race with the breeze dying and little shifts in direction making tactical positioning critical. After an exciting start and multiple changes of lead the win eventually went to Fiachra McCormick, just ahead of his brother Dónal with Jim and Johnny in third.

The prize for the double handers went to Diarmuid and Áine Gorman in Ffree Ranger and the single hander prize went to Fiachra McCormick.

Prize giving was held on the sun-soaked deck of the marina with a great evening sponsored by Carlingford Marina and the Moneley family.