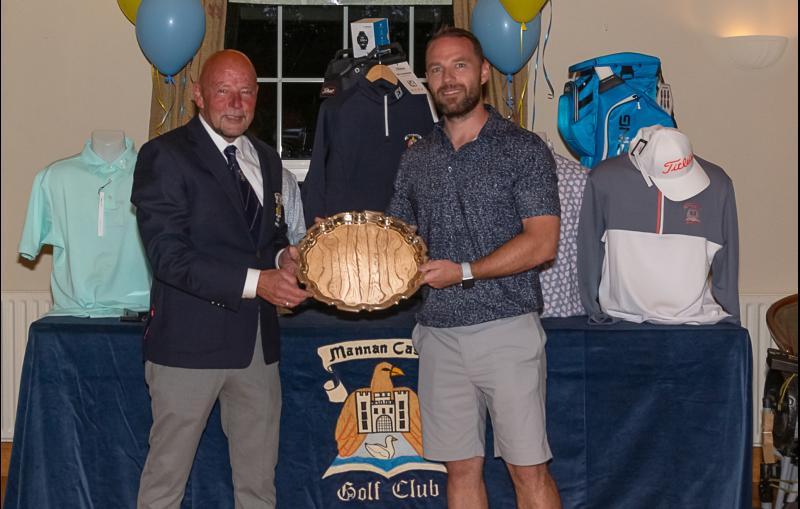 Fergal O’Rourke won Micheal O’Rourke’s Captains Prize with shots to spare. Fergal was the leading qualifier going into the nine playoff, with a 36 hole score of 79, three shots ahead of his nearest challenger.

He held his nerve finishing with 94pts, three shots ahead of the field, with an almost bogey free round of golf. Fergal was probably one of only a handful of golfers who didn’t think that the pin positions were tough.

Every year it is the captain that chooses the pin positions for his Captains Prize and most who played on Sunday said that they were ‘evil’. Fergal winning the 2022 Captains Prize was even more special, as Captain Micheal is Fergal’s dad.

In second place was Shane Donohue, a man who has frequently qualified for the playoff, great to see Shane make the podium this year with 91pts.

No surprise that Mark Lambe, one of our lowest golfers, won the gross prize but Mark played steady golf out there, just like young Padraig McEneaney with both finishing with a 45-hole score of 88.

In third place Richie Mulholland kept his cool and finished with a final score of 89pts, enough to claim third prize. Richie hits a great ball and has played very steady golf all year, he even got his wife Nuala out to caddy for him.

Congratulations to all the winners, it was especially great to see two relatively new members in the winning enclosure, with Ciaran Finnegan getting the best score on Day one with 40pts and Ryan Carolan topping the scoring charts on day two with a fantastic score of 39pts.

It was great to see so many members and friends (golfers and non-golfers) out to cheer on the twelve qualifiers in the Captains’ Prize nine playoff holes. It was great excitement as we watched the playoff on Sunday evening in almost tropical conditions.

The good scoring in the seniors comps in recent weeks continued last Tuesday where Peter Marquis (13) put together an excellent card to return 23 points for the nine holes.

Con Hanneffy (5) took second place thanks to five pars and a birdie, carding a score of 21 points. Graeme Woodcock (9) was in third place with 18 points.

Parring the first hole ignited the rounds of each of the top three finishers this week with Denise McGuinness forging ahead with a hot putter and four of her six pars on the front nine to take the victory with a very handsome score of 41 points.

An uncharacteristic blip on the third in an otherwise excellent round saw Jo Morris take second with 39 pts. Two players finished on 38 pts with Maureen Crawley's superior numbers in a steady performance earning her third position. Congratulations to the winners and well done to everyone who played.