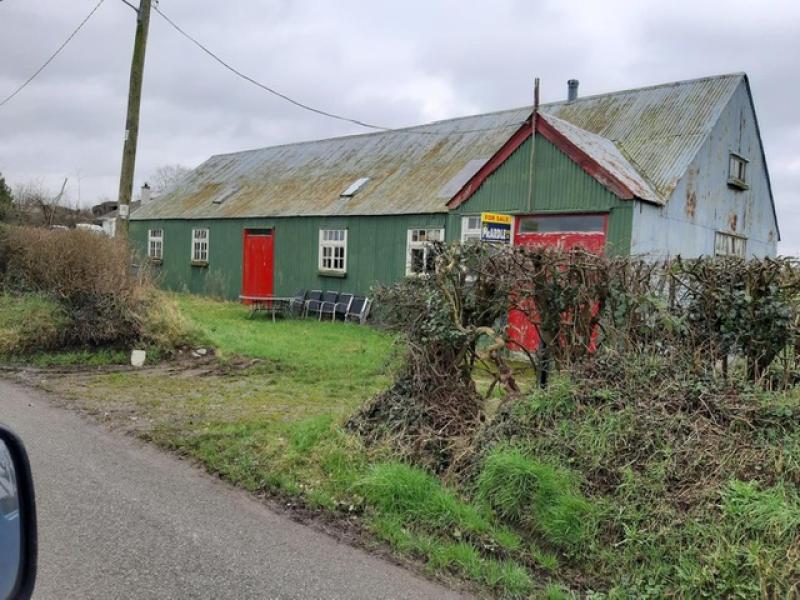 Milltown Hall which had been a landmark on the Milltown Road in Kilkerley for the last 85 years is no longer standing. The hall, which was out of use in recent years, was purchased by adjoining farmer Alan Clarke, who had it carefully dismantled for salvage and the piece of ground where it sat is now merged back with field which it originally was part of.

The Hall was officially opened on Sunday, November 1, 1936, by Mr Frank Aiken, Minister for Defence.

“The Hall is simply magnificent and sets a blazing headline which other Cumann throughout Ireland could do well to copy should they desire to assist the Government in their efforts to solve the social problems of the rural areas which is an urgent necessity. Kilkerley Cumann are to be highly commended on bringing such a stupendous undertaking to a successful conclusion. The Hall, which is a galvanised structure completely panelled in wood on the inside, is solid and substantial and probably one of the finest of its kind in any rural area in Ireland. It stands imposingly on a plot of ground given gratis by Mr T. Lynch, an old staunch supporter of the National Movement and a striking feature of its interior is the wonderful work of craftsmanship.

“The layout also leaves nothing to be desired which is a glowing tribute to the fine architectural qualities of the designer Mr P. Murphy. At the end of the Hall is a spacious stage to meet the demands of concerts and the dramatic entertainment’s while a special bandstand has also been provided. On Sunday night the Tricolour was conspicuously displayed and Green, White and Gold bunting was much in evidence.

“One individual who is deserving of special praise is Mr John McGuinness, Building Contractor, Park Street, Dundalk, a loyal adherent to the Republican cause. He gave whole heartedly any material required and his services were ever at the disposal of the Cumann. Another energetic worker behind the scenes was Mr J. Reilly, Chairman of Kilkerley Cumann. He was the driving force and its success is in no small measure due to him.

Continuing in English he said it was a great honour to be asked by the Committee to come there to extend to all a Cead Mile Failte on their behalf and he did not wish to let the opportunity pass without extending to the Committee his own appreciation of their courage and enterprise in providing the people of Kilkerley with a Hall of its kind.

“For the information of strangers, who were ready to learn from the Committee that an opportunity is to be given to the youth of the district to continue their study and practice of the Irish language. That objective in itself, justified the erection of the Hall. Parents should see to it, that they give their children the chance of becoming proficient in their native tongue.

“Along with the proposal to speak the language, he implored them to cultivate the other Irish side lines, music, singing and dancing to compliment the language. They represented the core of the Irish National movement. The battle was raging. The front line was the youth of Ireland and there is a danger that the youth would become listless in their fight.

“The Hall, the speaker continued, would be a monument to the foresight and courage of those who planned and built it. In their aims and objects, politics did not enter and the Irish Ireland Movement knew no barrier of creed or class.

“He hoped it would also be a help to stop the influx into the towns where much of the entertainment was doubtful in value or definitely un-Irish. The depopulation of the rural areas was a result of the necessary industrialisation of our country, but the Government was fully alive to the resulting evil and to remedy these, had never ceased to plan its arrest and hence the distribution of a portion of lands to small rural holders in every county in Ireland.

“In this connection, Kilkerley’s turn had to come and now it was his pleasant duty to introduce Mr Aiken, a member of the Executive Council and also the holder of the portfolio of Lands and Defence. I will introduce him in a much more familiar way and that is as Phroinsias MacAodhagain and I make no apologies for the name. Despite of all the cares of his Office, he has been able to perfect, the knowledge of the Irish language. While I extend him the kindest welcome of the people of Kilkerley, I ask him to declare the hall open.

“Mr Aiken who was enthusiastically applauded first spoke in Irish and continuing in English said he was more than glad to perform the opening ceremony since he had learned of the object of the Committee to further Irish culture as there was no more worthier motive.

“He could not agree with Mr O’Haire that the country had overcome all of their difficulties but they had at least made a determined attempt to rectify what everyone admitted was the work necessary such as Housing, which despite the fact that it was receiving express attention was still a pressing problem. He said Government is more anxious than ever to benefit the people of the country as a whole, beginning with those most in need and under the leadership of De Valera, they had made wonderful strides.

“They had confounded many a doubting Thomas and showed the world that Ireland still had a respect left and must be respected in other lands. As a representative for Louth he was proud to be invited to Kilkerley and prouder still of the Hall and workmanship displayed. The objects outlined by the Chairman, Mr Padraig MacCochagain left nothing to be desired and while exhorting the listeners to follow the Chairman’s advice of wishing the Hall good luck, he declared the Hall opened. A most enjoyable night of Irish dancing and singing followed.”

From the end of the 70’s no dancing took place in the hall but it continued in use for many more years. However the opening of the excellent facility which is Kilkerley Community and Enterprise Centre in 2001, meant there was very little demand from any quarter for the use of Milltown Hall.

Mrs. Julia Byrne ran a shop from an old G.N.R. bus beside the Hall, selling sweets, minerals and cigarettes, light refreshments, tea, cake, biscuits and also provided suppers for the bands in her own house. From the 1960's Mrs. Mary Alice Murphy, Milltown, provided the suppers for the bands.

One of the provisions of the dance licence was that no dancing be permitted in the Hall during Lent or Advent or on a Saturday night or on the eve of a Church Holiday.

As was the custom in most Hall’s the ladies stayed on one side of the Hall and the men on the other side. Towards the end of the night the band would play a ladies choice. Many lasting relationships and marriages resulted from dancing nights in the Hall. Country singer Brendan Shine asks in his song – where did you get her? ‘I got her in the Galtymore’ (renowned Criklewood dance hall), the reply in this case would be – ‘I got her in Milltown’ which many gentlemen can testify.

Some rules of the Hall were: