Bar One Sprint Cup Preview: Cracking line up set to feature in Semi-finals 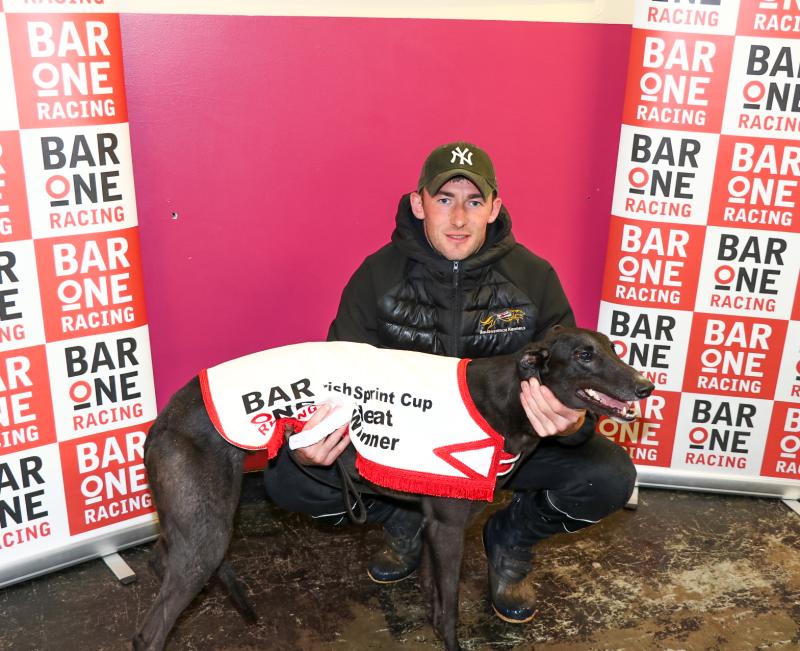 Serene Ace, pictured after winning his quarter final. After posting the best time in each of opening three rounds, the Tipperary based dog will be fancied to claim the Bar One Irish Sprint Cup crown

The build-up to Dundalk Stadium’s second big meeting of the year has begun. Advertisements are appearing, and they show that as a follow-on to the highly successful July 12 meeting, when the enclosures, which had been largely silent for a couple of Covid-infected years, were buzzing, another major meeting takes place on Monday fortnight, August 15.

Once again there’ll be horse racing in the afternoon, with the greyhounds then taking over. But whereas the non-racing emphasis was on attractively-dressed ladies vying for a lucrative prize a fortnight ago, this time it’s children who’ll have the call.

There’s a variety of attractions lined up, from train and pony rides to a dinosaur show. There’s also free goodie bags, a bumblebee transformer – whatever that is – and a magician, and with under-14s going free, it only needs good weather for the specially-designated area for these activities to be bunged out.

That will all take place in the afternoon in unison with the horseracing. Later on, greyhound racing has the place to itself, and the major attraction here will be the final of the Bar One Racing Irish Sprint Cup. This Classic, carrying a first prize of €20,000, is coming to the business end, its semi-finals taking place tonight.

There are twelve of the original entry of 54 still standing, and among them is Runninta Shay, owned by an Ardee area-based syndicate headed by bookmaker Mickey Rooney. No guessing from where the dog gets its name – it’s a tribute to Rooney’s brother, Shay, whose unexpected death took place last December.

The syndicate has, you could say, classic form. A couple of years ago its members cheered home Runninta Seeya, a winner of the Irish Laurels at Cork. Like that Classic winner, Shay is trained down south by John Linehan, and he put himself in the picture with a surprise but deserved win in last Saturday night’s quarter-finals.

The semi-final draw, however, hasn’t been kind. Runninta Shay runs from trap one in the opening semi-final, and that’s not in his favour. Stats show that of the 19 heats already run in the competition, only one has been won by a red-sheeted runner. But with three going forward to the decider, there’s a good chance Shay can advance.

Serene Ace has been the stand-out performer so far, winning his three heats, and in the best time in each round. The Tipperary-based runner goes from three in the second semi, and should keep his unbeaten run going. Corbrack Prince, a runner in the 2021 final, might spring a surprise in the other qualifier.