Louth Division 2 Match Reports: Back to back losses leaves Gaels under pressure 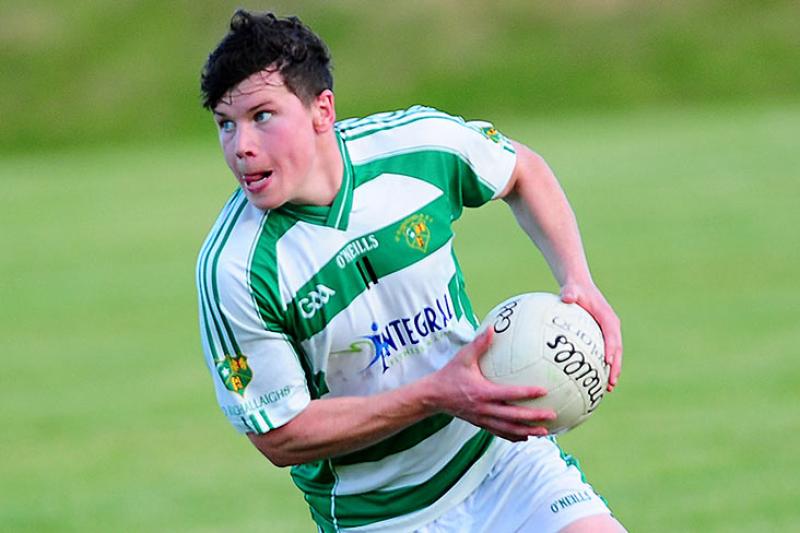 O’Raghallaigh’s have blown the promotion race wide open with a six-point win over leaders Dundalk Gaels on their own patch in The Ramparts last Tuesday night. The win puts the Drogheda men two points behind the toppers who have now lost two games in a row.

Two goals in the opening half from Eoin Moore and Ben Rogan was no more than the visitors deserved as they dominated to lead 2-6 to 0-3 at the turn. Gaels, short their anchor at full back in Oisin Murray, have felt his loss in defence in phase two.

In the second half the Gaels fought back through Dylan McKeown but fellow Louth under 20 player Kyle McElroy added to his tally down the stretch. The damage was done in the first half.

Hunterstown Rovers bounced back from their defeat to O Raghallaighs by recording a comprehensive win over Young Irelands on Tuesday evening.

The game in Hunterstown saw the hosts on top from the early stages and by the interval they had established a seven-point lead before a dominant display in the second period saw them cruise home.

Ryan Burns was the star of the show for the winners as he bagged a personal tally of 3-10, including a second half hat-trick.

The opening quarter gave little indication of what was to come as the teams traded early scores. Burns (2), Glen Matthews, Shane Halpenny and Brendan Lennon were on target for the hosts, but the Irelanders hit back through a brace each from Jordan O’Donoghue and Cathal Ferriter to leave the score at 0-5 to 0-4.

However, from that stage it was all Hunterstown and with Burns continuing to find his range, along with scores from Mark Ward and Cillian Taaffe, Rovers were 0-11 to 0-4 to the good at the break.

The first goal arrived on 32 minutes to put the game beyond any lingering doubt and Burns completed the hat-trick with strikes in the 45th and 51st minutes. Young Irelands could only manage three further points in the second half, including two from Peter McStravick.

St Kevins capped a very productive couple of days with an impressive display in victory over Roche Emmets on Tuesday afternoon.

Coupled with their win over Dundalk Gaels on Saturday evening, the Philipstown side have joined the Dundalk men at the summit of Division 2A, as TJ Doheny and Lee Crosbie made significant scoring contributions.

It was Doheny who opened the scoring for the visitors, and although Glen Stewart levelled on six minutes, the Kevins were not to be knocked out of their stride and went on to dominate the remainder of the half.

With Shane Meade, Karl Martin and Tom Matthews hitting the target, the Philipstown men opened up a 0-6 to 0-1 lead at half time.

The visitors continued that momentum in the early stages of the second half with four points from Evan Maher, Eoin McKenna, Lee Crosbie and Doheny. Although Kevin Callaghan responded for the hosts during that spell, a comeback was never on the cards.

Shane Byrne did fire over late scores for his side but the visitors capped another fine win with a goal from Doheny in the closing stages. 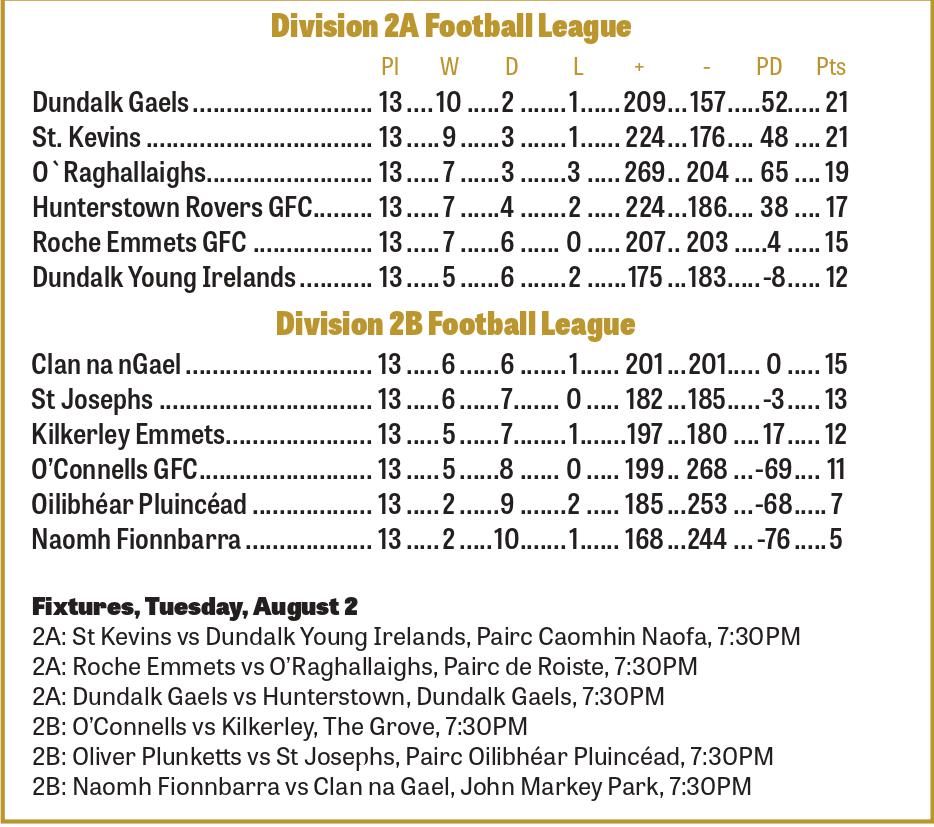 Clan na Gael recovered from a five-point interval deficit as they hit back to record an encouraging win at home to Kilkerley Emmets on Tuesday evening.

Paul Martin and Billy Smith were the men to claim the vital goals as their side picked up a victory that moves them further clear of the relegation battle.

The Emmets had the first four points on the board from Fintan Brady, Fionn Cumiskey and Tadhg McEnaney (2) by the time Billy Smith made it 1-1 to 0-4.

Cumiskey, Micheal McGeown and Ewan McEnteggart pointed before Conal McEnaney netted to make it 1-7 to 1-2 for the visitors, while McEnaney (2) and Fintan Brady's second point of the night made it 1-10 to 1-5 at the break.

The Clans upped their game in second half hitting 1-11, with Paul Martin’s goal giving them the lead by 2-11 to 1-12.  Despite McEnaney and Cumiskey doing their best to get the Emmets back in front, it was Clans who did enough to hold out for victory.

Oliver Plunketts picked up their second win in the league and first win in phase two when they had a four-point victory over the O’Connells at Mell on Tuesday night.

The home side got off to a flyer when Sean Callaghan had the ball in the back of the net after 30 seconds. Cian O’Dwyer got the visitors’ first point of the game, but the Plunketts then hit five unanswered points from Cian Brady, Cian Matthews,

Callaghan, Stephen Keeley and a free by goalkeeper Luke Haggans to leave the score 1-5 to 0-1 after 12 minutes.

A couple of minutes later it was down to one when Quigley and Jackie Agnew combined and the latter fired his shot to the net with five minutes to go before the break. Substitute Killian Nolan got the last point of the half for the Mell side to leave the score at halftime 1-7 to 1-5.

The sides shared the first four points of the second half, two from Quigley for the Bellingham team and Conor Early and Barry Reynolds for the Plunketts.

Another free from Quigley and O’Dwyer’s third point of the game brought the sides level 1-9 each after 43 minutes. O’Connells went in front for the first time when Quigley landed his sixth point of the game, but Early equalised with ten minutes to go on the clock.

Conlon put the Bellingham side ahead again, however substitute Shaun Smith levelled the game again with less than five minutes to go.

Killian Nolan got his second point of the game to put the Plunketts in front with two minutes to go and the same man set up the winning score when he found Sean Brassil and he punched the ball into the net to secure their second win in the league.

The Joes opened phase two of their league campaign with a four point win over Naomh Fionnbarra in John Markey Park on Tuesday night.

They twice went ahead in the early stages through Jack Mulligan and Alan Lynch, only for the Finbarrs to level.

The visitors then began to get a grip on the game and thanks to Craig Doherty, Alan McKenna and Mulligan they led by 0-6 to 0-3 at the end of the first quarter.

The hosts came more into the game before the break with Thomas McCreesh and Jack Butterly contributing to the scores.

However, the Joes maintained their three-point advantage to lead by 0-9 to 0-6 at the break thanks to scores from Killian Staunton and Craig Doherty (2).

Although the Finbarrs pointed from a 13m free after the restart, it was the Joes with the breeze at their backs who hit three points in as many minutes, Alan McKenna, Alan Lynch and Craig Doherty on target to extend the Joes lead, 0-12 to 0-7 on 38 minutes.

The Finbarrs did manage to cut the gap back to three points at one stage but the Joes always appeared to have enough control to hold out for victory with a late Conor Neary point completing the win.

Clan Na Gael are hitting form at the right time with two wins in a week. Having beaten Kilkerley Emmets on Tuesday, the Clans took care of the Joes away in this refixed game on Friday night.

In a game that could have gone either way, the Clans could have been out of sight by the end of the first 20 minutes. Joe’s netminder Jordan Mackin denied the Clans on three occasions in a blistering start.

Alan Lynch finally settled the hosts. Mark McGeown and an excellent point from a narrow angle on the right by Paul Mackin had the Clans up by 0-4 to 0-2 after that bright opener.

After weathering the storm, the Joes would hit four points in a row between the 21st and 27th minute, through Ben Collier (two), Craig Doherty and Jack Mulligan to lead at half time 0-7 to 0-6.

A superb point from Collier had the Joes up by three on 40 minutes but the Clans turned the game round in a five-minute spell of dominance.

Robbie Curran pointed a monster free from 50m plus and then it was Conall McKeever who collected a high ball into the goalmouth to finally get the better of Mackin in the Joes goal and that would be the difference in the end.