Louth Division 1 roundup: Dreadnots back in the race for survival 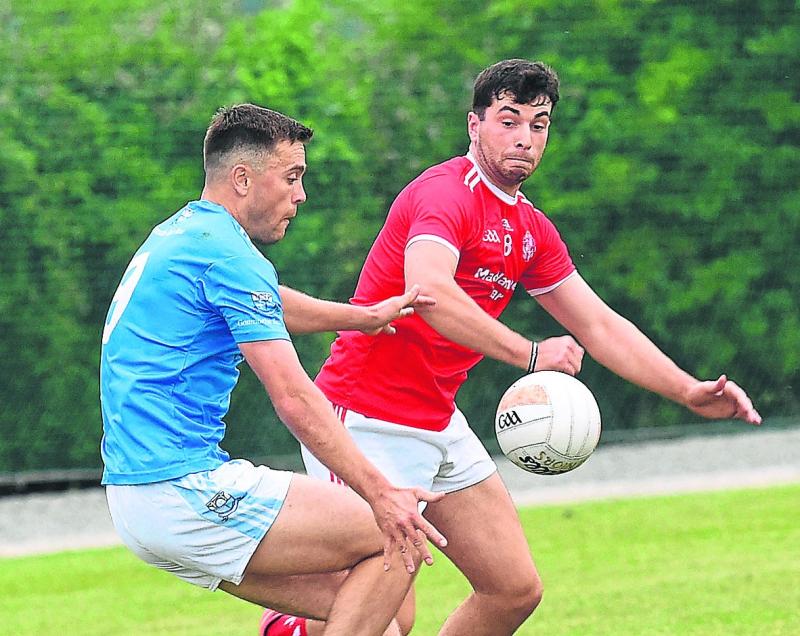 Jay Hughes and Pepe Smith inspired Dreadnots to what could be a crucial win in their battle to avoid the drop from Division 1.
Tuesday’s encounter may have had the added spice of being a derby with St Fechins, but on this occasion the points were much more valuable than local bragging rights.

The win lifts the Clogher side off the foot of the table and also denied the Fechins a victory that would have given them a bit of breathing space. Instead they remain very much in a dogfight that includes Cooley Kickhams, Geraldines and Sean O’Mahonys.

The hosts were grateful for the telling contribution of Hughes and Smith with the former scoring a crucial second half goal along with four points over the hour, while Smith added a further five points.

Niall Devlin was impressive for the visitors as he finished with 1-4 but it wasn’t enough to prevent his understrength side from slipping to another defeat, having failed to overturn a 0-7 to 0-4 deficit at the break.

Geraldines and Cooley Kickhams missed the opportunity to pick up a much-needed win in the battle to avoid relegation as they couldn’t be separated in this Division 1B clash at McGeough Park on Tuesday evening.

The teams were desperate for maximum points and following an edgy encounter, both will see this as a missed opportunity.

The result, coupled with Dreadnots’ win on the same evening, means that Cooley have dropped back to the bottom of the table, while the Gers are only two points above the bottom place.

The major score of the first half summed up an edgy game as Cooley were gifted a goal through a defensive mix-up that saw the ball ricochet off a Gers defender and into the net. That score saw the visitors lead by 1-6 to 0-8 at the break.
Sub Shane Rogers made the decisive contribution of the second half as he came off the bench to hit the net and ensure his side came out with a draw.

St Patrick’s moved five points clear at the top of Division 1B thanks to a narrow win over Sean O’Mahonys at the Point Road on Tuesday evening.

In what was the quintessential game of two halves, the Pats came out firing on all cylinders from the start, kicking the first points of the game from play, including efforts from Tadhg O’Connor, Joseph Connor and Matthew Pagni, before Terry Kelly got the home side off the mark with a wonderful left footed kick.

However, it was the peninsula side that had their shooting boots on before the break, kicking another 1-4, 1-3 coming from Aidan McCann before the break, while a Stephen Kilcoyne point from play and a Thomas Rice free was all the O'Mahonys could muster.

At half time it was 1-9 to 0-3 for the visitors. However, Pat's failed to score from play after the restart, registering only one Martin McEneaney free throughout, while a Terry Kelly free off the turf started the comeback.

Ben McLaughlin was unlucky to drill the ball over the bar after battling to get the chance, with the keeper scrambling back to cover, however five minutes later he made no mistake, slotting low past the advancing keeper after sustained pressure and possession by the home side.

Even though Terry Kelly landed another free, while Thomas Rice and Stephen Kilcoyne raised two more white flags, time ran out for the side from the Quay.

Newtown Blues remain top of the Division 1A table alongside St Mary's after seeing off the challenge of St Brides at Knockbridge on Tuesday evening.

Goals from Ciaran Downey, Andy McDonnell and Fergal Donoghue were instrumental on the night as the visitors came out on top by six points.

For St Brides it was a second defeat in three days in what has been a disappointing start to phase two of the league.

Downey finding the net, they held a commanding 2-5 to 0-4 lead going into the break.

The hosts fared a little better in the second half and did hit the net themselves, but the Blues were never in any real danger and Donoghue hit the third goal to seal the win.

St Mary’s produced a strong second half display to hold off the challenge of St Mochtas in Ardee on Tuesday evening.

This top-of-the-table clash was closely contested up to half time, but the hosts – inspired by Daire McConnon – stepped up the pace to claim another victory as they remain level with Newtown Blues at the summit.

It was a disappointing outcome for the Louth Village men who had kept themselves in contention for the opening half, but they had no answer in the second half as the Ardee men went on to win by 13 points.

The visitors enjoyed a good return in the first period with Declan Byrne finding the net but at the other end Ciaran Keenan raised a green flag to see his side lead by 1-8 to 1-6 at half time.

St Marys then upped the pace in an impressive second half, with Daire McConnon grabbing a brace for a side that would end with 11 different scorers. Oisin Callan hit the net for the Mochtas but it was too little to prevent the hosts from easing to victory.

Five-star Naomh Mairtin kept pace with the top of Division 1A with a heavy win over neighbours Mattock Rangers on Tuesday night in Collon. Four second half goals put a hefty gloss on the county champions scoreboard as Tom Gray secured a hat-trick in that period.

Mattock ironically would get the first goal of the game, with Liam Flynn punching home at the back post, but Mairtin’s corner forward Thomas Clarke would punish him with a turnover when Mattock were caught out in a sloppy piece of play at the back to make it 1-6 to 1-3 in the visitors favour.

Cathal Fleming then landed the first goal of the second half, lobbing over the two Whelans, Evan and Mark, on the line after

Craig Lynch lost possession and it would soon be level. But Fergal Reel’s side would be soon going up to the gears.

Tom Gray found the net with the next score, his first to open the unassailable gap. Gray would add two more and Stephen Campbell would bring the game to a close with a penalty. The Mairtins remain joint top.