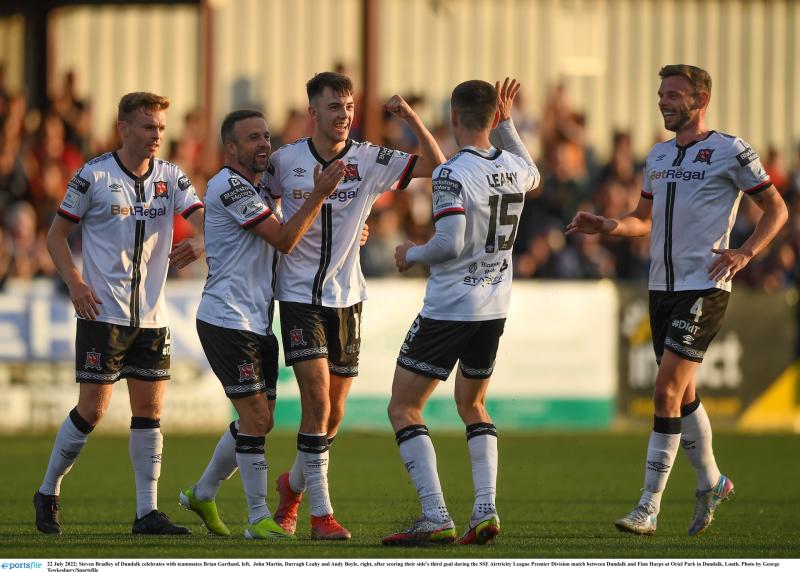 Dundalk FC continued their unbeaten home record in this season’s SSE Airtricity League as they coasted to a comprehensive 3-0 win over struggling Finn Harps at Oriel Park.

The Lilywhites tore Harps to shreds and were 2-0 up inside six minutes, thanks to strikes from Darragh Leahy and Keith Ward before Steven Bradley added a third on 36 minutes.

An hour before kick-off, it was announced that Dundalk’s influential defender, Mark Connolly, had been recalled from his loan spell at Dundee United, with the Soccer Writers Player of the Month being replaced by Sam Bone, who returned to the back four.

Robbie Benson also missed out through injury, as Bradley started out on the right flank, while for Harps, Liam McGing and Filip Mihaljevic both came into the staring line-up.

Leahy had an early shot pushed away by Harps goalkeeper Mark McGinley, but the Dundalk left-back wasn’t to be denied on three minutes when he fired home after Bradley’s initial attempt from a quick Ward corner was blocked out by Ethan Boyle.

Ward made it two, slotting home from close range after the ball was squared to him by Greg Sloggett, who had raced down the right after being picked out by Patrick Hoban.

Hoban could have added a third when he dragged a shot inches wide following some Ward pressure that forced Ryan Rainey to concede possession in a dangerous area.

Harps did have chances to get themselves back into the game, first through an Ethan Boyle long-throw which was headed over by Robert Jones, before Peter Cherrie saved to deny Rainey from distance, with Lewis Macari doing well to clear the resulting danger.

Dundalk were dominant throughout and made it 3-0 when Sloggett played it out to Bradley, who got the better of Robert Slevin and Barry McNamee before cutting inside and curling a goal-of-the-season contender beyond the grasp of the helpless McGinley.

The visitors almost pulled one back early in the second half when a Regan Donelon set-piece was right on the boot of Conor Tourish, but Cherrie made a good point-blank save.

At the other end, Daniel Kelly rounded the outrushing McGinley after a quick break and then played it back to Ward, whose curling effort crashed off the inside of the woodwork.

Hoban’s incisive pass just needed a touch from Bradley, while the Dundalk captain soon after flashed a header off target after getting on the end of a cross from the Scotsman.

Bradley fired wide as the game entered its final 20 minutes, before a Hoban cross from the left was directed off target by the head of Leahy, who came close to scoring a second.