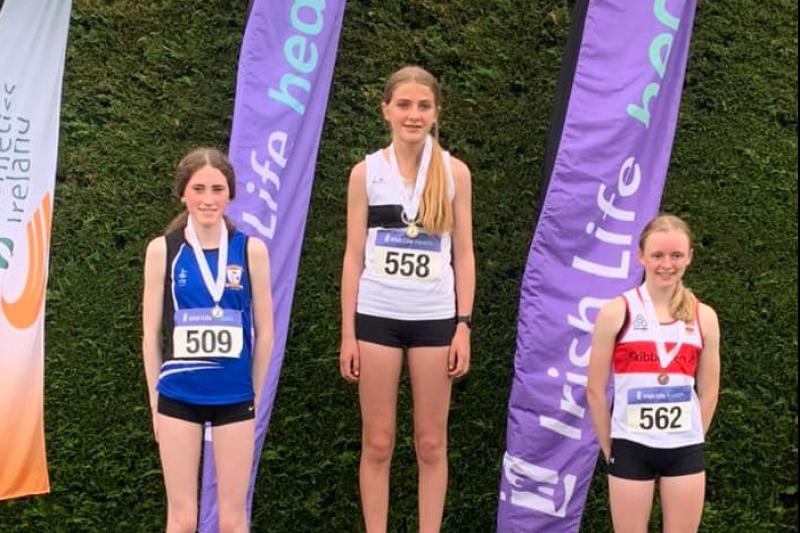 Dearbhla Allen, left, on the podium following her silver medal triumph in the girls U16 3000M Final at the National Juvenile Championships

The curtain came down on the National Track & Field Juvenile Championships when days Two and Three took place at the Tullamore Harriers Stadium. The St Peter’s club had already enjoyed great success from day 1 which took place the previous weekend.

The club had just two athletes in action with Dearbhla Allen in participating in both the 3000M and 1500M events in the U16 age group and Judith Bell competing in the U18 long jump.

Dearbhla went into the U16 3000M event knowing that if she could reproduce the form that saw her take the Leinster title last month, then she had a really good chance of winning her first national Track and Field medal.

The young runner led from the gun and found herself part of a three athlete breakaway group from early on. The pace increased and Dearbhla found herself back in third place with the fourth place athlete closing her down.

However, she showed great tenacity and found her gears to pull away from that pack and in the process chased down the athletes in front of her, storming up the home straight to clinch the silver medal with a couple of metres to spare.

The following day Dearbhla was in action again in the U16 1500M and although she made a good account of herself, it was a tall order so soon after a tough 3000M race the previous day.

Her target from the start of the track and field season was to medal at the national championships in the 3000M, which she achieved. This was a remarkable year for the St Peter’s club, winning four medals at the National Championship with Cian Gorham, Rory McLoughlin, and Sean Reilly all medaling in their various age groups in the 800M.

Judith Bell had a good championships also, qualifying in two events having competed in the girls U18 hurdles a week earlier. Judith had a strong showing the long jump, narrowly missing out on the top eight jump off for the medals.

Meanwhile the Louth Master Championships took place recently at Bush, where former Louth footballer Eamonn McAuley made his debut in the St Peter’s colours, taking Gold in both the 100M and 200M sprint races in the over 35 category.

Dermot Plunkett collected three silver medals in the 100M and 200M sprints as well as the shot putt in the over 50 category. Tom McGrane took silver in the senior shot putt, opting to compete at Senior rather than over 55.