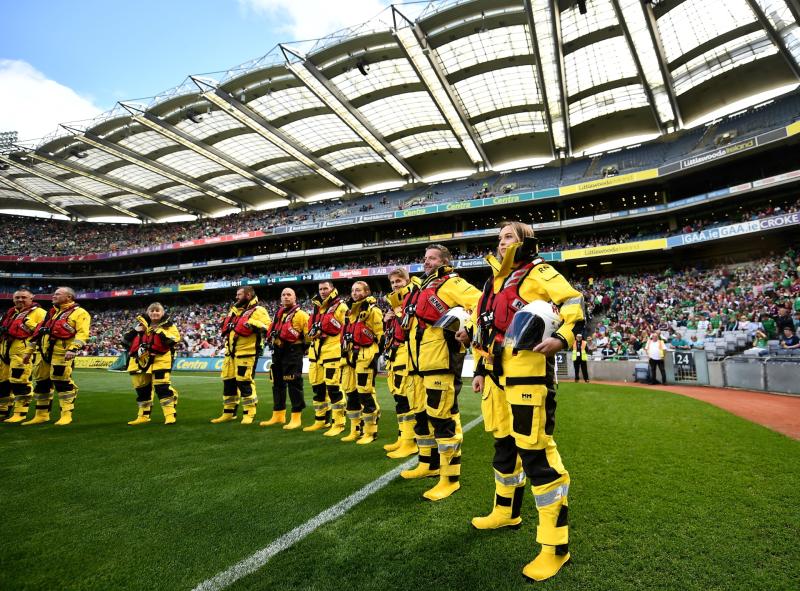 Lifeboat crew from around the island of Ireland, took to the pitch during Sunday’s All-Ireland Senior Hurling semi-final at Croke Park, to promote the charity’s partnership with the GAA on water safety.

Before Limerick and Galway battled it out for a place in the final and in front of a packed stadium and TV audience, RNLI volunteers including Clogherhead’s Derek, dressed in their full kit, unfurled a giant flag showing an all-weather lifeboat in action.

The RNLI and GAA water safety partnership was established in 2017 to raise awareness of drowning prevention and to educate communities on how to stay safe in and around the water.

The partnership is part of the GAA Healthy Clubs’ programme and has seen RNLI lifeboat crew visiting GAA clubs around Ireland to deliver water safety talks to all age groups.

Within a 10km radius of the 46 RNLI Lifeboat Stations on the island of Ireland, there are 333 GAA clubs.

From the first year of the partnership, the GAA have invited the RNLI to Croke Park for an All-Ireland Semi-Final, where the charity has reached new audiences that may someday save a life themselves with water safety advice.

Talking after his experience at Croke Park, Derek said:

“It was a brilliant event, and we got the flag the right way up! I’m delighted to be part of the RNLI and GAA partnership, this opportunity to spread the message of water safety, not just to the Clogherhead coastal community but to the whole island of Ireland.”

“We take great pride in our lifeboat station, and all of our volunteers.

"To see them, with Derek, on television, in front of 52,000 people in Croke Park was a very special moment for Clogherhead RNLI, our local Dreadnots Gaelic Football Club and all of County Louth.

"This combined effort by the RNLI and GAA creates a fantastic opportunity to make a positive impact on sea safety awareness through the drowning prevention program.”

"This was an amazing opportunity to be given by the GAA and it shows the importance of working in partnership with organisations who share our values.

"With so many people watching and listening, we are bringing important water safety messages to a huge audience, that could one day save a life."