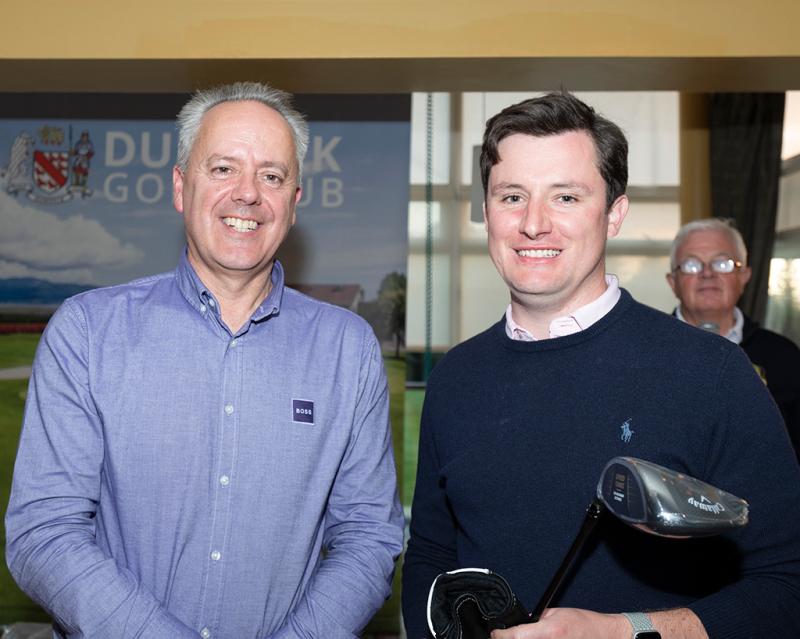 Over 250 players teed it up in Leslie Walker’s Professional Prize at Dundalk Golf Club with Conor Martin emerging as the winner.

He shot a nett 70 after producing a very steady round of 15 which saw him open with five straight bogeys before back-to-back pars at the fifth and sixth. A double bogey at seven was followed by a bogey at eight and a par at nine as he went out in 35 nett.

He began the back nine with a par at the 10th followed by bogeys at the next holes before consecutive pars at the 13th and 14th. After double bogeys at the 15th and 16th he finished strongly with pars at 17 and 18 to come home in 35 nett.

The best nett score of the competition was carded by Matthew McCaughey who, after going out in 37 nett, had come in 33 nett thanks to a birdie at 10 and pars at 13 and 16. However, as juniors and juveniles are not permitted to win major competitions, McCaughey had to settle for second overall.

Aaron Grant shot a 71 to win the Gross Prize. After going out in two over par, Grant reeled off four birdies down the back, including three in a row from the 13th, to come home in 33 for a one-under par total of 71. George Rogers won the Veteran’s Prize while the Divisional honours went to Bernard Laverty, Odhran McShane and Frank Keyes.

On the inter-club front, there were four wins from five matches for Dundalk teams. On Friday evening the Junior Cup team beat Black Busk 3.5 to 1.5 while on Saturday the Jimmy Bruen Shield team beat Seapoint by nine holes.

The Fred Perry Trophy team then defeated All-Ireland finalists and current Leinster North champions Westmanstown by 3.5 to 1.5. The Provincial Towns Cup team had a 4.5 to 2.5 win over Ardee while the Newsam Cup team were narrowly beaten 3-2 by Knightsbrook.

Gillian McDonnell was the leading scorer in the 18 Hole Stableford played on Saturday June 18 and Tuesday June 2 which was very kindly sponsored by Mc Quillan’s Pharmacy.

Playing off 12, Gillian claimed the Division 1 top spot by three points from Katie Rowland. Gillian covered the front nine in 18 points, which included pars at the fifth, seventh, eighth and ninth holes. A superb level par back nine followed, in which she birdied the 12th and 16th holes, and carded five more pars.

Geraldine Hoare was the winner of Division Two with 37 points and Margaret McCourt took Division Three honours with 36 points. Very well done to all prize winners and many thanks to McQuillan’s Pharmacy for their very generous sponsorship of this event.