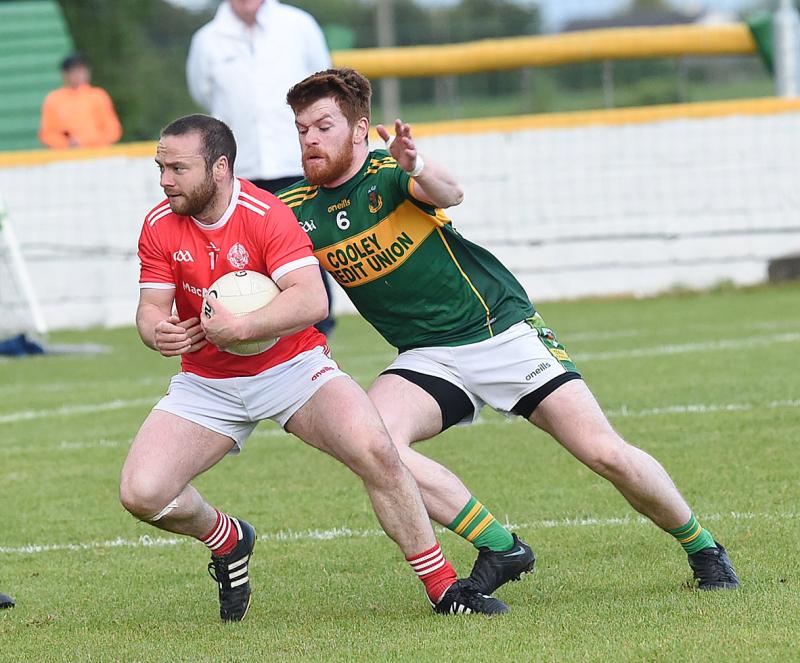 A St Mary’s blitz either side of the break helped them brush aside the challenge of St Patricks in Ardee on Saturday evening.

The hosts were in fine form during that spell as they struck 1-11 while conceding just once at the other end to claim a victory that saw them move third in the table.

Darren Clarke led the charge for the winners as finished the game with a personal tally of 1-6.

The opening quarter gave little indication of what was to come as Clarke was among the early scorers along with Gavin Gregor and Jack Murphy for the visitors as the game was tied at three points apiece.

However, the Marys then took complete control and by the time the half time whistle sounded they were leading by 0-11 to 0-4.

The Ardee men didn’t let up after the restart as they added a further three points along with Clarke’s goal on 42 minutes to open up a commanding lead.

Although the game was well beyond them, the Pats fought to the end and landed the final three points of the game through Cathal Grogan, Danny O’Connor and Conor McGuinness.

Dreadnots made it a worthwhile trip to Haggardstown on Saturday evening as they returned home with an important win.

A strong second half showing proved the difference between the teams as the Clogher men came out on top by eight points to help move further clear of the bottom of the table.

Owen Murphy and Jay Hughes scored the all-important goals in what was a comfortable win in the end.

The opening period saw little between the teams and although the Dreadnots kicked some good points, a goal from Ben Gartlan had the Gers level at 1-2 to 0-5 at half time.

It was the visitors who picked up the pace in the second half and goals from Hughes and Murphy put the game beyond the Gers despite Jim McEneaney landing five points after coming in as sub.

St. Brides were held to a draw by bottom of the table Cooley Kickhams on Saturday night, but for long periods it looked like the visitors would run out winners as they had lead the entire match.

Although missing a few regulars The Reds were fastest out of the blocks and were four points up before three minutes were on the clock.

The scores coming from a first minute point by Sean Marry and a goal by Andrew Smyth.

St. Brides were the better side in the first half and this showed on the scoreboard as they led at the interval by 1-5 to 0-4.

The second half was a little disjointed and it took until the forty first minute for the first score when the home side reduced the deficit to three points.

Cooley came more into the match after this and after the introduction of veteran, Brian White, levelled matters right at the end of normal time.

St. Brides looked like they had sealed victory when substitute Ross Kehoe slotted over well into stoppage time but the hosts equalised soon after just before the long whistle blast.

St. Mochtas joined Newtown Blues at the summit of Division 1 with a comprehensive victory over St. Fechin’s in their own back yard in Bealieu, The win was somewhat tainted by the serious shoulder injury suffered to ace marksman Declan Byrne.

In truth the Louth Village men had the points sewed up in the opening half when they lead 2-9 to 0-4 at the turn.

Ronan Holcroft and the Devlin brothers provided resistance but Kieran Quinn’s side were full of running and those late runners were causing havoc.

In the second half the Fechins got off to a brighter start with two pointed frees from Niall Devlin with the hosts defence holding off the visitors till the 10th minute with a Ciaran McMahon point from a free.

McMahon would finish with five in the finish.The teams exchanged points but then Mochtas proved to strong thanks to Conor Garland and Jamie Farrell’s industry.

County star Craig Lennon found the net for the visitors in his return to yellow and blue.Fechins substitute Cathal Doherty did nail a consolation but that was never going to be enough to narrow the gap. Moch’s go top, but thoughts were elsewhere.

The Jocks came away with both points after a convincing win over a workmanlike Sean O’Mahonys at Monasterboice on Saturday evening.

After an early O’Mahonys goal, the Mairtins kicked nine of the next ten points with five coming from the boot of Conor Whelan as his side led by 0-10 to 1-1 at half time.

The Martins played into a stiff breeze in the second half where supports got to experience all four seasons in the second 30 minutes.

Craig Lynch was lethal from placed balls in the second half, kicking three points with the pick of them from 51m into a gale.

A foot block gave Conor Whelan the chance to score from the penalty spot but his effort was well saved. However, soon after Stephen Campbell found the net from the spot to seal a win that moved the Jocks into the top half of the table.