Louth County Council held a special one item agenda Council meeting on Thursday 2 June 2022, to consider the conferring of a civic honour on 2022 IBA World Light-welterweight champion, Amy Broadhurst. Amy and members of her family watched on from the public gallery in the Council Chamber in County Hall Dundalk, as members voted unanimously to confer the honour on Dundalk's new world champion. Dundalk’s Amy Broadhurst claimed the world championship title, having convincingly beaten her Algerian opponent, Imane Khelif, in the final of the 60-63 KG Light Welterweight Division at the Women’s World Championships in Turkey on 19 May.

The local authority was required to hold the council meeting to consider conferring the civic honour under Section 74 of the Local Government Act, 2001 as amended. Following the agreement to bestow the civic honour, Amy spoke to the members present, where she said she was thrilled to have the opportunity to receive the award and to formally respond.She recalled previously getting a civic award from Dundalk Town Council in 2013 and said she was honoured to bring some positive news to Muirhevnamor and “bring a buzz to the area”.

All parties then adjourned to the foyer of County Hall to attend a civic reception. Guests included members of Clann Naofa, Dealgan, and O'Hanlon Park Boxing Clubs, Dundalk where Amy grew and honed her talent, as well as Rostrevor Boxing Club of which she is currently a member. Representatives from St Joseph’s NS, and Coláiste Rís, where Amy went to school were also there to honour their past pupil, along with representatives from Alt na Daoine, Muirhevnamor, the Community Garda Section, Dundalk Garda Station, AURA Dundalk and Dundalk Football Club, all of whom Amy would have had strong links with growing up.

Speaking at the event Joe McGuinness, Director of Services for Louth County Council, told Ms Broadhurst, “Amy, you have done yourself, your family, your community, all of Louth, and indeed all of Ireland proud. “You’ve truly put this wee county on the map.” – a sentiment which was echoed throughout the night by all speakers.

MC for the night, Pat O’Shaughnessy, also interviewed Amy on her boxing career to date. Amy commented that people used to say to her “you’re going to be the next Katie Taylor” and it was now amazing to think that somebody out there might be saying to young girls, that they are going to be the next Amy Broadhurst. The championship match was played for all present throughout the night on a big screen which was especially erected for the event. 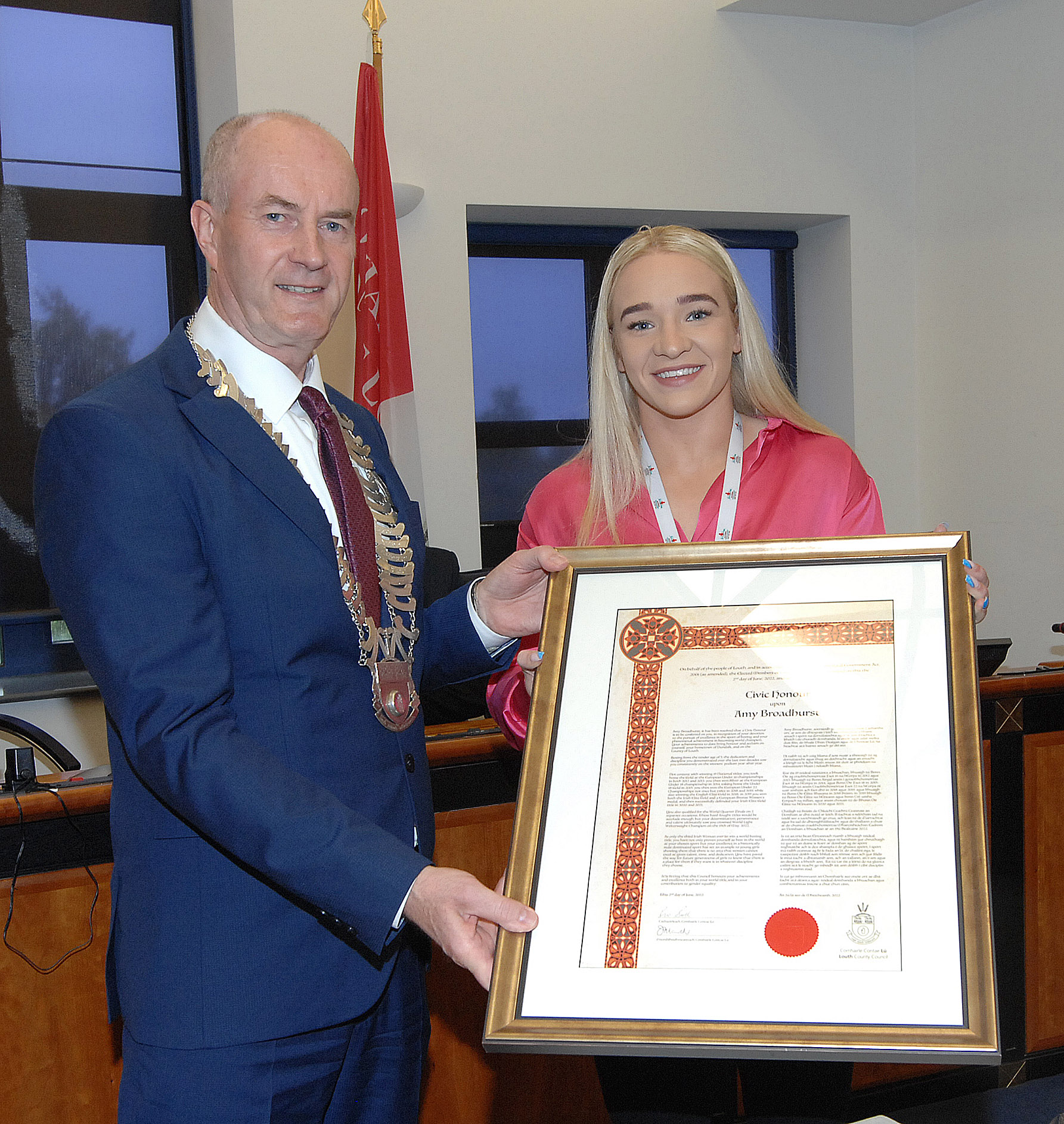