“Seatown has a special place somehow in Iron Annie. It’s like a blueprint for my imagination.” 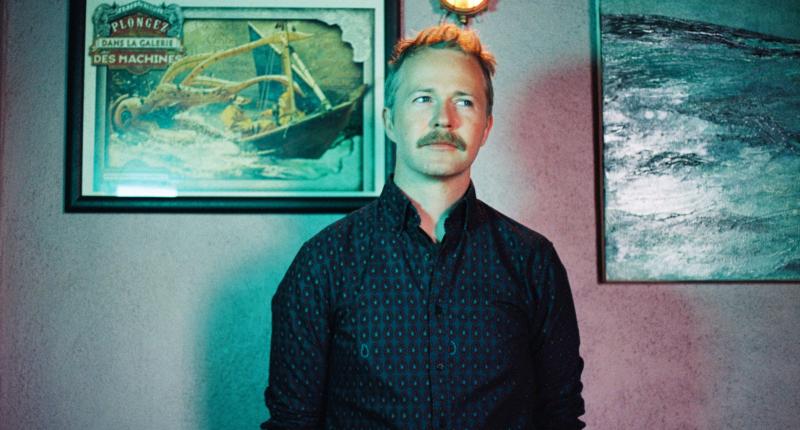 Iron Annie, the debut novel by Dundalk-born author Luke Cassidy, has made this year’s longlist for the £10,000 Desmond Elliott Prize.

The novel follows the relationship between Aoife and Annie as they navigate Dundalk’s criminal underworld and the people who inhabit it.

Written from Aoife’s point of view and completely in the Dundalk vernacular the novel is filled with local references to places and people.

The Democrat caught up with Luke to discuss writing about the town and what it means to be a writer from Dundalk.

Where in Dundalk did you grow up and do you have any abiding memories of the town from that time?

My earliest childhood was I think spent in Kilkerley. We then moved in to live in Seatown. Seatown has a special place somehow in Iron Annie, and the book I just finished, Tooth & Nail. It’s like a blueprint for my imagination, the slightly warren-esque network of streets with squat buildings and an ever-present mist hanging overhead, often imbued with the smell of smoke. Jaysis, you could imagine anything going on—and it often was.

What were some of your early influences literature wise?

I didn’t really have any but I was big into hip-hop as a teenager. I like to think of myself as a failed rapper who got a second chance.

When did you start writing/having the idea that you wanted to write?

Well, as I say, my career in hip-hop was a non starter—go figure. I thought I had some good tunes there, but the scene said otherwise. After that I had no choice really but to turn to the books, and the best ones always seemed to be fictional. I thought, if I could only do that, that’d be class.

How did the idea for Iron Annie come about?

Here, if I told you a lie you wouldn’t believe me.

Iron Annie is written in the Dundalk vernacular, why did you make that choice?

It wasn’t really a choice. I just came across this character, Aoife, a real rulya hallion, a proper border bandit type - but with a lot of emotion, too. She is a character that you could say is co-extensive with the Dundalk vernacular as you put it. There was no telling her story another way, hey.

Did you worry that people from outside Dundalk wouldn’t get some of the references or turns of phrase?

They could do worse than learn! Nah, in all seriousness, in modernity, language gets inherently centralised, and this kind of writing makes an important statement about that, and it can be bloody beautiful. To explain what I mean, well, everyone knows we speak English because of British Imperialism, but we managed to do something beautiful with their barbarity. In today’s Ireland, we’re all breaking our necks to speak a heavily Americanised English that is devoid of all that. The language we speak is already a colonial consequence, but it’s one that carries with it a very Irish sensibility, an understanding of place and emotion—a wealth of cultural memory really.

When I hear someone start a sentence with ‘reach out,’ it makes me want to chop off whatever it is they’re pushing my way!
What I am saying is that language, and how we use it aren’t neutral things. There’s a big issues of decentralisation, anti-colonialism and representation in the use of so-called vernacular language. And besides at this stage there’s a solid precedent for its use in literature. Also, just, mon the town hey.

Did you have any trepidations about writing from the point of view of a woman?

I was already doing it before I realised what I was doing and once I realised what I was doing I was just very careful to check myself often and sensitively with the many intelligent & literary women I’m lucky to have in my midst. I’m glad to report that I’m often met with approval in how I’ve achieved it from women who are sick of reading two-dimensional female characters written by men. And I mean why wouldn’t they be sick, there’s been so many of them!

How do you write? Specific word counts, time of day? Do you have a set routine?

Oh it’s very easy, you just sit down at the keyboard and bleed. Not to be facetious, but it all really depends on the project, if there’s a deadline, etc. The only thing I always try to get right is doing at least something every day.

Who have been some of your creative influences in writing or other art forms?

I think I mentioned I’ve been a fan of hip-hop since I was young—even if it hasn’t loved me back exactly. But I don’t hold a grudge. In contemporary literature, it’s hard to pick any since there’s really a very great deal that’s really good. I think when I read Helen DeWit’s book The Last Samurai (nothing to do with Samurai) it really expanded my idea of what it was possible to do with a novel, in the way you can also say Joyce etc., did—yet it seems to me she hasn’t had enough readers by half. It might sound funny, but in addition to music, which I’m genuinely deeply passionate about I think that a writer can learn a lot by paying attention to cinema and architecture.

How would you describe your writing style?

Good, goddammit. I shoot from the hip and I take no prisoners.

Violence is peppered throughout the book but really peaks at the end similar almost to a Flannery O’Connor story. She famously said she did this to either give her characters a moment of clarity or give them a chance to save themselves. Is this the case in the scene with Aoife and Shamey at the end, does she have a moment of clarity?

I’ve read a lot of Flannery O’Connor’s work, and what she’s written about the work and my sense is that she sits in the school of writers that work by design, whereas I allow the action to stem organically from the characters. Both schools are valid, and she was an outstanding writer who left us with a treasure-trove of work, particularly in her short stories where she brought the American short story to the next level. I think the event you allude to with Aoife and Shamey, though, had to happen. It was pre-ordained, not by me, but by the character of the story and the things they were doing, if that makes any sense. I would say, though, that Aoife’s real clarity comes at the end-end, when all the dust has settled.

In the acknowledgements at the end of the book you thank various members of the Dundalk music scene, could you tell me a bit more about this?

Dundalk has an amazing music scene, and a couple of years ago after having lived out foreign for a long time I came back to the town via that same scene. Okay, so my hip-hop act didn’t take off the way I had hoped, but everyone’s been very nice and supportive about my writing!

What do you have coming up?

I just finished writing my second book, Tooth & Nail, which will also be published by Bloomsbury & Vintage books (in 2023).
I’m working on a play set in Monaghan, which I hope to premiere there. A play I wrote—adapted from Iron Annie—will play be performed in Dublin, Cork, Belfast and at the Edinburgh Festival this summer. The show involves several Dundalk based and associated musicians and actors, it’s called the Iron Annie Cabaret, and it’s funded by the Arts Council and after the big cities, be bringing it back home, to the Spirit Store, on August 6th.

The show had its stage debut at An Táin Arts Centre last October during our first run, which was great, so it makes sense to bring it back home again, and the Spirit Store has done so much for music and the arts down though the years that it just feels right. I also just got development funding from the Arts Council for a new show, Improvised Landscapes. Improvised Landscapes will explore the place of music, language and landscape meet, and is a collaboration between myself and classical violinist Molly O’Shea - she plays withe the National Symphony Orchestra, so I’m equal parts excited and intimidated.

€40,000 up for grabs for Louth GAA clubs through Kellogg’s GAA Cúl Camps competition