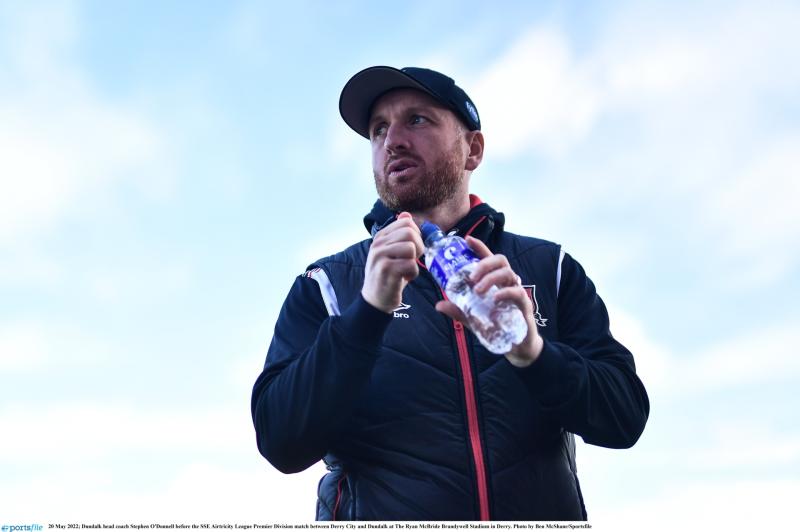 Headline: O’Donnell remains tight-lipped when discussing his sending off

On Friday night, Stephen O’Donnell became the first Dundalk FC boss to be sent off since Sean Connor received a red card on the opening night of the 2009 season.

Dundalk travelled to the Ryan McBride Brandywell Stadium to face Derry City, picking up an impressive 2-1 win over The Candystripes, their first away victory of the year.

A superb effort from Robbie Benson had put The Lilywhites ahead inside ten minutes, but James Akintunde then equalised for the hosts as the game entered its closing stages.

However, there was late drama on Foyleside, as Patrick Hoban won all three points for Dundalk with a neat finish on 82 minutes after being set up by substitute John Martin.

In the immediate aftermath of that goal, O’Donnell, who had earlier received a yellow card from referee Robert Harvey, was given his marching orders by the Dublin official.

“I’ll leave that for everyone else to talk about,” replied O’Donnell when asked to comment on the performance of Harvey, who issued a total of nine cards on the night.

The reaction to that late winner from the Dundalk head coach sparked ugly scenes amongst the home crowd before further altercations between the Derry support and some of the official travelling party, including club captain Brian Gartland, ensued.

“It’s very tight here,” added O’Donnell. “The dugouts, the crowd and the lads not in the squad. It basically has one with the spectators and celebrating, so it can lend itself to that. Football is about emotions and it just spilled over a little bit.

“There was a little bit of banter going over and back. You get a bit of stick during the 90. We all jumped up celebrating. It’s one of those things. It looked worse than it was.

“I’m not getting involved in that. I’m just delighted with the win. We’ll worry about that type of stuff after tonight. I’m delighted to come here, they are one of the best teams in the league and we came up here and won the game, so I’m really happy with that.”

Following his sending off, O’Donnell took his place in the stands, but had to be removed and escorted into the tunnel by security after yet more unpleasantries had broken out.

“I wasn’t allowed to sit in the stand, so I’m not really sure. You’re usually allowed go in the stand. You just leave the pitch, you leave the field of play. I’m not happy with it. It’s not ideal, but I’m delighted with the result and the players. That’s the main thing.”

An otherwise positive night for Dundalk was enhanced by defeats for both St Patrick’s Athletic and Sligo Rovers, outcomes that put The Lilywhites, having played one game less, three points clear of their nearest rivals in the race for European qualification.

Indeed, success in their game in hand would in fact close the gap between themselves and go ahead of second-place Derry, but O’Donnell insisted that he is strictly focusing on his own team’s performances and not the results of their competitors.

“We’re just focused on ourselves. If we keep picking up points, we’ll be happy. We don’t want to be relying on other results whether it’s a good night or not. We’d be as disappointed if results went for us or went against us. If we lost the game, it wouldn’t make a difference to our form. It’s about winning and losing.

“I think Derry are a very good team. Patrick McEleney will be back quite soon. I think Mickey Duffy will be back maybe soon as well. When you bring them two back into that team and if they add then in a couple of weeks’ time, they’re a really formidable team.”

Having played Finn Harps in Ballybofey on Monday night, Dundalk’s next match in the SSE Airtricity League comes this Friday against St Pats at Oriel Park (kick-off, 7.45pm).

Ray Matthews (Westmeath) will officiate what is a crucial fixture in the race for Europe – a game which is also available to be streamed live via the LOITV service for a price of €7.