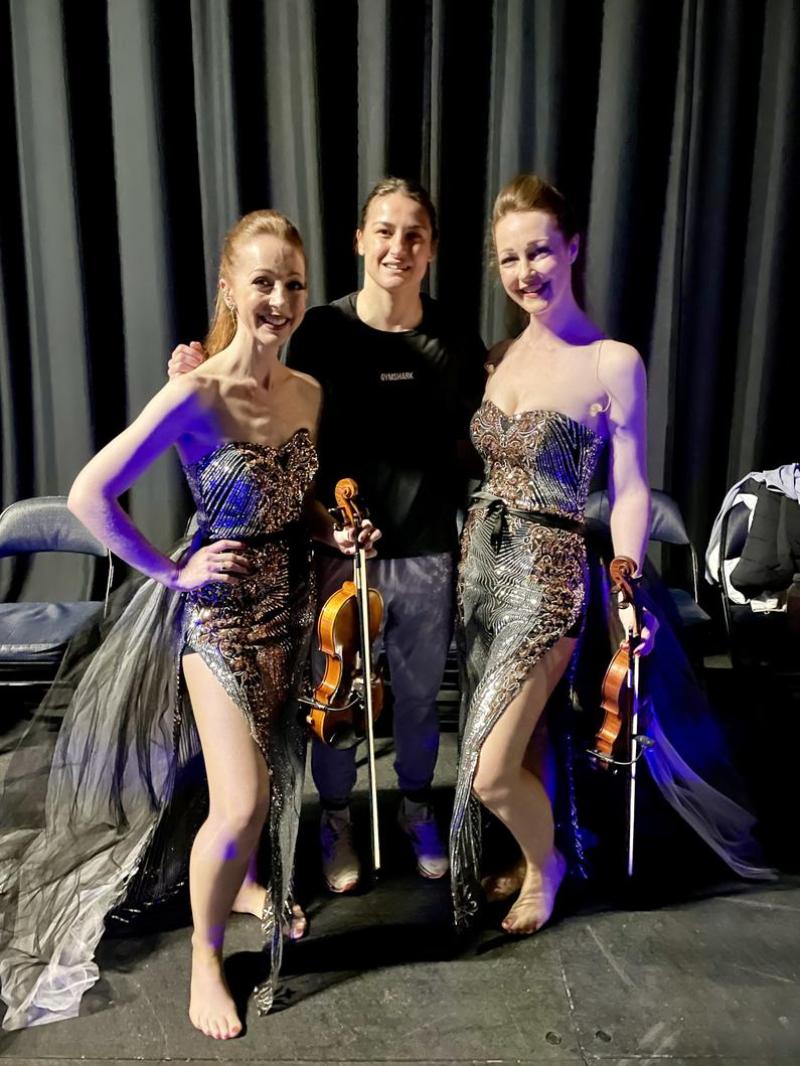 Anyone who watched the weigh-in for the Katie Taylor Amanda Serrano fight couldn’t help but be struck by the unique blend of rock and trad music as Taylor took to the stage.

The creators of the unique composition are the duo known as Sephira, two sister Ruth and Joyce O’Leary from Carrickmacross,

Having gained success touring the states for many years, the talented Monaghan violinists have played for the likes of Prince Albert of Monaco, Priscilla Presley, and even a U.S. President.

But it was unofficial Irish royalty in the form of world champion boxer Katie Taylor that came calling a few months ago when the Bray boxer’s promoters contacted the sisters requesting they perform at her weigh-in last Friday.

“We were sitting at a family wedding in The Woodlands in Adair, and I was contacted by a singer songwriter that we know over in New York,” Ruth O’Leary, who makes up one half of Sephira.

“He said look, Matchroom boxing is going to be on to you and they want you for a televised event.

“We had no idea what it was about and the next thing an email from Matchroom came into our inbox asking if we were available for Katie Taylor’s weigh-in and walk out.

“My sister wasn't there, she was actually in New York at the time we just both were like oh my God how can we make this work?"

The girls immediately set to work studying weigh-ins to get a feel of what music would be appropriate and were given free rein to create design and perform a unique piece of music with the one stipulation from Matchroom that they include Oró, Sé Do Bheatha 'Bhaile, the story of an Irish warrior princess. .

“And then as she was being weighed we wanted something really impactful, powerful for her feminine power.

“We went into Kashmir by Led Zeppelin, then Drowsy Maggie the trad tune because we knew that that would be the moment where the whole of the Madison Square Garden audience would just erupt.

After the weigh in, they even got a few minutes to speak with the Bray boxer.

“Honestly, [she was] just sterling, an unbelievable human being. She came off the stage after her weigh-in and said, ‘thank you so much girls. That meant so much to me.’

“And she said she was holding back tears.”

So impressed were Matchroom that they asked the duo to perform for Taylor’s walkout the following night.

“They asked us straight away if there was any way we could do the following night and we had to say, look, we have a moral dilemma.

“We have an event. We need to get back to Monaghan from Madison Square.

“We are standing there like the main guys of Matchroom going. I'm really sorry we'd love to do it but morally we just can’t we’ve another event.”

With there already being talk of a rematch in Croke Park would the sisters be open to a similar performance on home soil?

Sephira are currently working on a music video for their new Monaghan anthem song and are calling on all businesses, clubs or schools in Monaghan to contact them at: Monaghananthem@gmail.com , should they wish to appear in the video.