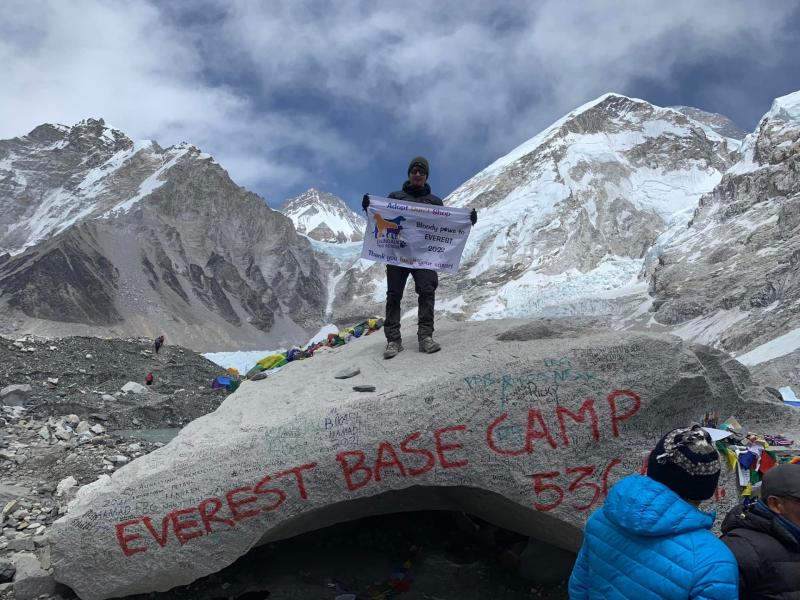 Ryan Doherty and Everest base camp

Ravensdales’s Ryan Doherty has reached Everest Base Camp and is about to attempt his summit of Island Peak mountain in the Himalayas, despite a bout of sickness.

Ryan is climbing to raise funds for Dundalk Dog Rescue.

The climb is the culmination of months of training as Ryan told the Democrat back in February.

In a Facebook update before attempting to summit Ryan wrote:

“We have reached our last tea house before we leave for basecamp and high camp of Island Peak.

“We will travel to high camp and rest then begin our summit attempt of Island Peak at 2am local time so that’s 9:30 pm Irish time, after basecamp our group kinda fell apart health wise, we are all suffering with either khumbu cough or stomach problems.

“I have a bit of both but I’ll motor on, physically and mentally I’m doing good.

“The temperature has taken a dramatic turn as you can see our water is freezing as we walk. We are currently waiting for a weather window for our summit attempt.

“We will be going through some skill work today with our ice axes and shown where our fixed lines are for the ridge to summit.

“That’s all for now. Hopefully the next post you see will be me at the summit.”

Those wishing to support Ryan’s ‘20305 Bloody Paws to Everest’ fundraiser can do so via GoFundMe at: www.gofundme.com/f/20305-bloody-paws-to-everest

Dundalk court: Fined for not securing load to van