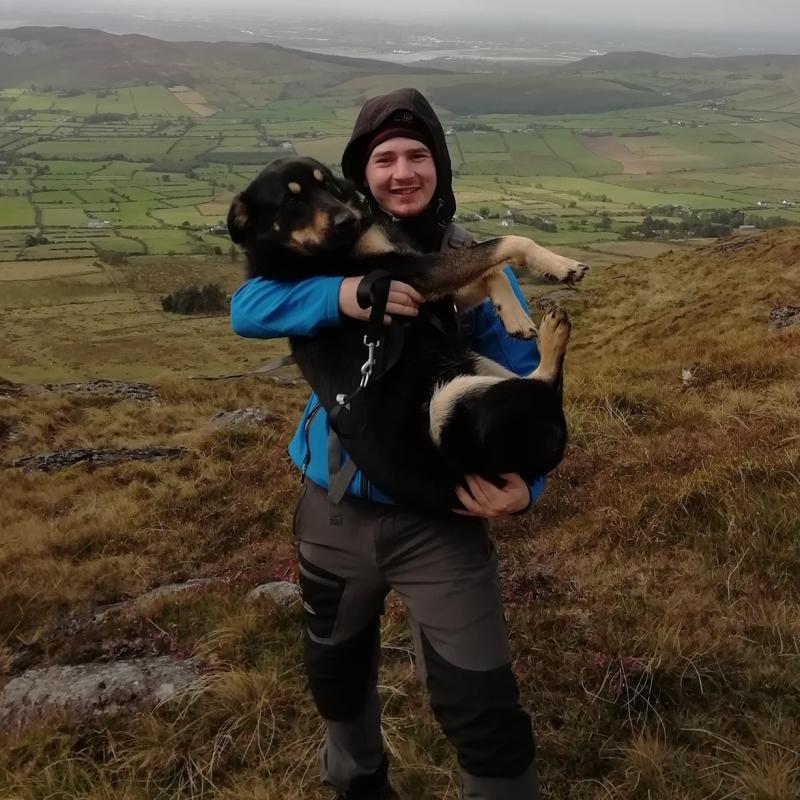 While many will have resolved to get more active in the New Year, few will be as active as Ravensdales’s Ryan Doherty who is currently training to climb Island Peak mountain in the Himalayas in aid of Dundalk Dog Rescue.

Ahead of the climb in April, the Democrat chatted to Ryan about his love of climbing, his training and his fundraising efforts.

Born and bred on the Ravensdale mountains, the 27-year-old always had a love for hiking and climbing.

“I find it to be very peaceful, instead of sitting in front of the television when I was younger I was up the mountains or playing in fields,” he said.

“I don’t have any interest in football or GAA, so in school we used to get day trips up Slieve Foy or Slieve Donard and I’d just love it.

“If I could sell everything and just live in the forest or mountains I would, but I don’t think the government or the council would like this,” he joked.

Having already climbed Kilimanjaro to raise funds for Cystic Fibrosis Dundalk in 2019, Ryan decided to set his sights on an even more challenging trek that will see him pass through Mt. Everest’s base camp.

”I didn’t want to do just base camp for a trek, I wanted something that would challenge me more, so Island Peak caught my eye with ice climbing and having to cross ice crevasse on a small ladder which to everyone reading this sounds insane, but sure that’s me!

But Ryan isn’t just climbing for the thrill of it. The work of Dundalk Dog Rescue caught his eye, motivating him to raise funds for their new rescue centre which is currently being built and also raise awareness of puppy farming in Ireland.

“I picked Dundalk Dog Rescue after I did a charity Strictly Come Dancing with them in 2019, I didn’t realise the amazing work they did, they really go above and beyond to make sure these rescue dogs can find their forever home.

“They raise so much awareness to help educate people to help save a rescue dog instead of buying one and fuelling the puppy farming industry in Ireland,” he explained.

The climb was originally scheduled for October 2021 but had to be cancelled due to Covid restrictions.

Ryan looks on the bright side saying it gave him more time to train for the 23 day trek, while adding that he plans to really ramp up his regime in the next few months.

“Starting in January I’ll be back out on the mountains all over Ireland so if you see me have the craic with me!

“My goal is to just start introducing longer hikes to get more miles on my feet.

“As for preparing for the cold there’s not much you can do.

“When I climbed, Kilimanjaro temperatures dropped to -19C.

“That way I’d stay warm and have a nice warm drink upon waking.”

While the physical training is important, Ryan is quick to praise the support he has gotten from family and friends.

“I’ve had great help from Bobby Wain of Dundalk Dog Rescue, he’s really helped out, my family are great even though my mother wants to batter me for going and climbing another mountain.

“My girlfriend Amy is a serious hiker and drags me out any chance she gets so she’s been great as well.”

Fundraising during Covid has been hard for Ryan yet he still remains upbeat and hopes to raise €20,305, a euro for every foot of the Himalayan peak.

“The response has been great, the people of Dundalk are great and they really do support local causes. I think the more attention this campaign gets, the more donations will come in.

Those wishing to support Ryan’s ‘20305 Bloody Paws to Everest’ fundraiser can do so via GoFundMe at: www.gofundme.com/f/20305-bloody-paws-to-everest