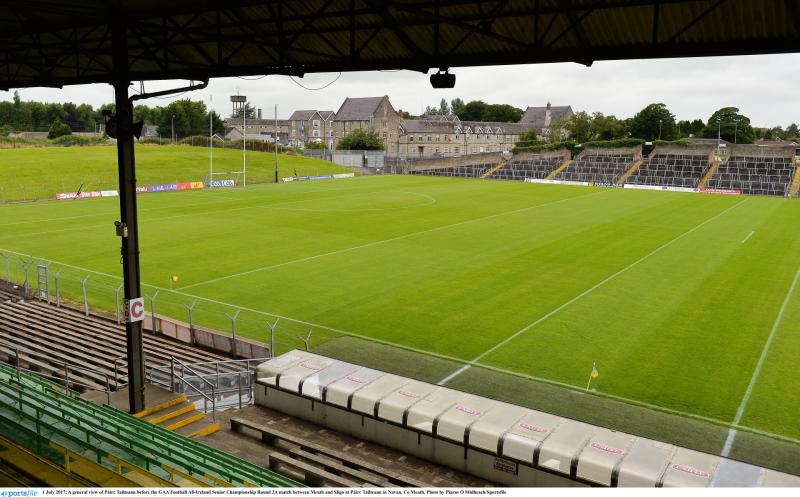 Pairc Tailteann in Navan is where Mickey Harte's troops will start their 2022 championship journey with a meeting against Carlow this Sunday. (Pic: Sportsfile)

There’s no back door in championship football this year, just as there wasn’t in 2021. Covid was at work last year and that put paid to the All-Ireland qualifiers and also the Super 8s.

However, there’ll be another cherry for the 31 football counties, as well as London and New York, to have a bite at. (Kilkenny have been that busy winning hurling titles they are not bothered with the big ball game anymore.)

As always, the four provincial championships are to be run off, with London and New York engaging but already defeated in Connacht. When they are completed, however, there’ll be no pass for the winners to the All-Ireland series as was traditional, or to the Super-8s, as was the case for a few years.

Instead, there are to be two brand new competitions, an All-Ireland championship, for which the Sam Maguire Cup goes on offer, and the newly minted Tailteann Cup.

The line-up for each won’t be finalised until the provincials are decided. Sixteen teams are already guaranteed a place in the All-Ireland – the eight that contested Division One of the league just ended, the top six in Division Two, and Louth and Limerick, promoted from Division Three.

There could be more, maybe even as many as 24. A million-to-one would be the odds about this happening, however. It would require the four provincial finals being contested by none of the teams included above.

Maybe the likes of Tipperary might make the Munster final, and, if they were to recover the shine of a couple of years ago, Cavan would have a chance of being in St Tiernach’s Park on Ulster final day. All others are rank outsiders.

As can be gauged from its name and the prize on offer, the All-Ireland carries much more prestige. As said, this is the competition Louth are set to contest.

It will be more difficult of the two to win, but ask anyone wearing red; the players, the management, supporters, which one they would prefer to see the team playing in and you can be sure the majority would plump for this one.

The All-Ireland is further down the line, so let’s park it until then. Coming up later today is the opening round of the Leinster, and here Louth play Carlow. It’s at Pairc Tailteann and the bookies’ odds, and form over the past few months, point to a Wee County win.

In Division Four of the league, dominated by Cavan and Tipperary, Carlow struggled across the line with only one of the competing eight teams behind them. It clearly wasn’t a good spring for the team in the multi-coloured jerseys.

But, be warned Louth, it was much the same back in 2011 when Louth were raging hot favourites to beat the south Leinster County, and it didn’t turn out so good for the team in red.

No-one better than Mickey Harte to give complacency a kick out the door. He’s knows better than most that you should take nothing for granted in football.

When he confidently expected to be going for another year on the Tyrone sideline, having in a stellar career brought six All-Irelands to the mid-Ulster County in three different grades, three of them senior, he got one to the solar plexus.

Harte and his sidekick, Gavin Devlin, both of whose approach to work around Darver on training days is opening the eyes of those who are there to see it, won’t be showing any disrespect to Sunday’s opposition.

They’ll want the backs to be as vigilant as they were in keeping Limerick goalless in the Division Three final, while at the same time putting in a several upfield sorties, Tommy  Durnin and whoever partners him winning midfield, and Sam Mulroy and the others up front keeping the scoreboard ticking over.

There should be a good crowd at the Navan grounds – the expectation in this county is that there’ll be another outing the following week, this one against Kildare.