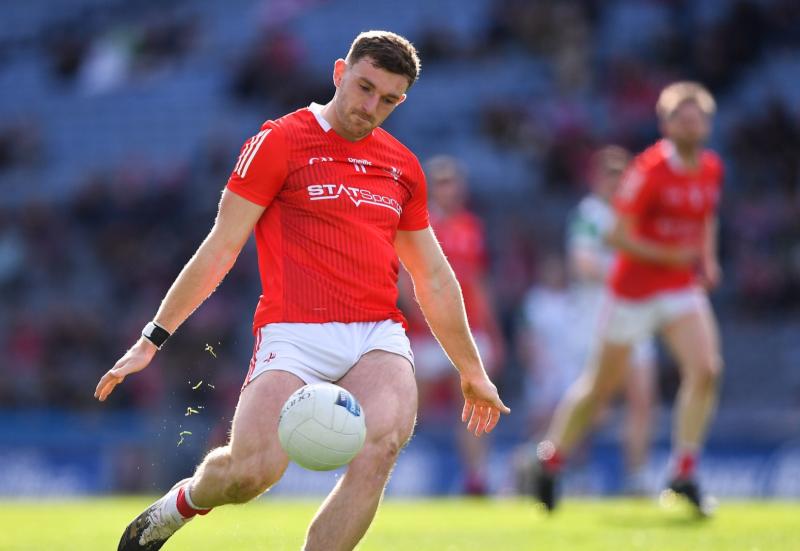 It has been an interesting 2022 so far for the Louth Footballers. One with plenty of highs, along with odd day to forget. It began with a winless O’Byrne Cup; losses to Longford, Dublin and Offaly leaving supporters a little worried about what might be in store for the rest of the year.

But credit to this group of players, they are a determined bunch and after a poor start to the National League, some big wins over fancied opposition followed. Limerick and Westmeath, big scalps taken against the odds.

Then of course came a national trophy in their most recent outing earlier this month, as the Wee County descended on Croke Park and once again defeated the Treaty Men. This time they held the favourites tag and duly put Limerick to the sword to win the Division Three crown.

Front and centre to their attack has been Louth captain Sam Mulroy, who feels all these tough league battles will have them primed and ready for championship action which begins this Sunday when the make the short trip to Pairc Tailteann in Navan to face Carlow (Throw in 2:30PM).

“The league is the best games we have at the moment in terms of finding your level, as across the board the leagues are so competitive” he exclaimed.

“Winning matches is a massive confidence boost to any team and the lads are striving from them at the minute and trying to push on further, winning as many matches as we can.  As the more wins you pick up the greater the confidence. Our results so far have set us up nicely for championship.”

One person who has always believed in this group, even when results weren’t going to plan, is their ambitious manager Mickey Harte.

Since coming into the fold at the start of 2021, the Tyrone native has boosted the level of training up in Darver at the Centre of Excellence. Yet the Naomh Mairtin clubman knows it is up to the players to produce the goods come game day.

“Mickey and Gavin have been absolutely excellent since they came in. There is no stone left unturned, they do everything they can to help us win matches. Yet ultimately, at the end of the day it’s the players who must take to the pitch, but the boys give us no excuses not to deliver for them.”

“I think we are doing the best we can week in, week out to get those wins and that’s because the lads have instilled belief in us, shown us the way to prep for matches and recover from them afterwards. I just think everything is now done to a higher standard as that is what they expect.”

While the Wee County may be riding on the crest of wave, the same cannot be said for Sunday’s Leinster Championship opponents Carlow. As Harte’s troops were flying high in the league, the Barrowsiders struggled in a division lower.

In Division Four they managed to pick up just three points from their seven games, their only victory coming against Waterford alongside a draw with Wexford. That left only one team below them in the eight team league, with wins coming hard to come by for Niall Carew’s charges.

Looking at their most recent clash, the Division Four Promotion Play Off played at Netwatch Dr Cullen Park, won’t give their fans much solace either. On a beautiful summer’s afternoon Louth comfortably coasted to a 1-23 to 1-15 eight point win. The Louth rise had begun.

Seven out of the front eight Louth players found the target, while Daire Nally was also blooded into the team that day. Among the top scorers were Mulroy, Ciaran Downey, Liam Jackson and Ciaran Byrne who could all feature again on Sunday and will hope to cause similar havoc.

Yet the Louth captain is not taking their challenge lightly. Too often have teams in red been turned over when expected to win. Just look to 2011 when Carlow caused a huge upset a year after Louth had made the Leinster Final. Harte and Co will make sure they do not take their eyes off the ball.

“Carlow are a good side with some really good players, it will be a tough test and we all know anything can happen come championship day and when Carlow get their tails up they are a hard team to stop.

“We will definity give them the respect they deserve. We know a lot about them, have played them a lot over the last number of years so it will be a big test. Hopefully if we get it right on the day we will come out on the right side.

Big days in the championship are not something the young forward has had much experience of. Last year they were beaten first day out against Offaly.

A year earlier they were defeated by Longford, again in the preliminary round and Mulroy is desperate to help Louth get a run this year they can be proud of, with a date with Kildare the prize on offer for the victors in Navan.

“During my time with Louth I haven’t even played 10 championship matches” he stated. “It’s barely over five so it is crucial that we get a match that we can potentially win at the first stage. It will be nice to pair up with a team that is at a level playing field to where we are at.

“We’re happier having won games ahead of this contest, but you just cannot underestimate anyone. If we perform, no matter who we are playing, we can put up a good performance and hopefully we can get the win Sunday.”