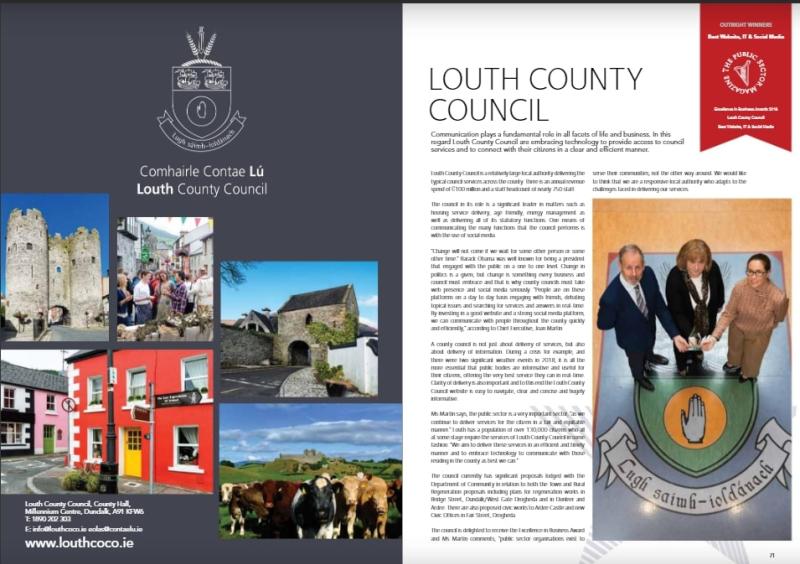 A colour ad from the 2018 awards issue of the magazine awarding LCC best website, IT and Social Media award

The magazine has recently come under the spotlight, featuring on several episodes of Liveline with Joe Duffy, with several business owners claiming on the programme that they were asked to pay for adverts in exchange for getting an award from Public Sector Magazine.

The information obtained by the Democrat under the Freedom of Information Act shows that Louth County Council made eight separate payments totalling €13,708 to the magazine over six years.

The magazine is in no way affiliated to any official governmental body and is published by a private company, Devlin Media.

Records show that in 2016 the Community and Housing section of the Louth council purchased an advert at the cost of €1,100 (exl VAT).

In 2016, a two-page colour ad appeared in the awards issue of the magazine promoting the Boyne Valley and detailing the Irish Maritime Festival held in Drogheda Port and announcing that the council had been awarded a ‘Local Government Tourism Award’ from the magazine.

In 2018, the Corporate and LEO (Louth Enterprise Office) sections of the local council spent €1,000 and €1,395 (excl VAT ) respectively on purchasing two advertisements in that year’s awards issue.

Similarly, 2019 saw the LEO and Community and Housing sections of the council spend €1,600 (excl VAT) each on advertisements in that year’s awards issue of the magazine.

€351k allocated for works on rural roads and laneways in Louth

The 2019 awards issue of Public Sector Magazine again featured an identical write up to the one featured in 2018, announcing that Louth LEO had again been given the outright winners award for ‘Business Development.’

Another colour ad in the same issue announced that Louth County Council had been awarded the ‘Housing Services County Council Award alongside a short editorial piece entitled, “Living in Louth.”

The Democrat could not verify if any awards were issued to the council in those years as copies of the magazine for those years cannot be found online and the Public Sector Magazine website states that it is closed for updating.

When asked to comment on the above information, a spokesperson for Louth County Council said:

“Louth County Council can confirm that it purchased advertisements for the awards edition of Public Sector Magazine from 2016-2021.

“Louth County Council has advertised with this publication as the annual awards recognise excellence in the Irish Public Sector and the main target audiences are key stakeholders for the Council, and therefore provided a platform to reach these key audiences.

“On an ongoing basis, Louth County Council analyses and reviews awards that recognise high-quality work carried out by the County Council and its staff, and have the potential to reach key target stakeholder audiences.”

Public Sector Magazine did not respond to the Democrat when asked to comment.