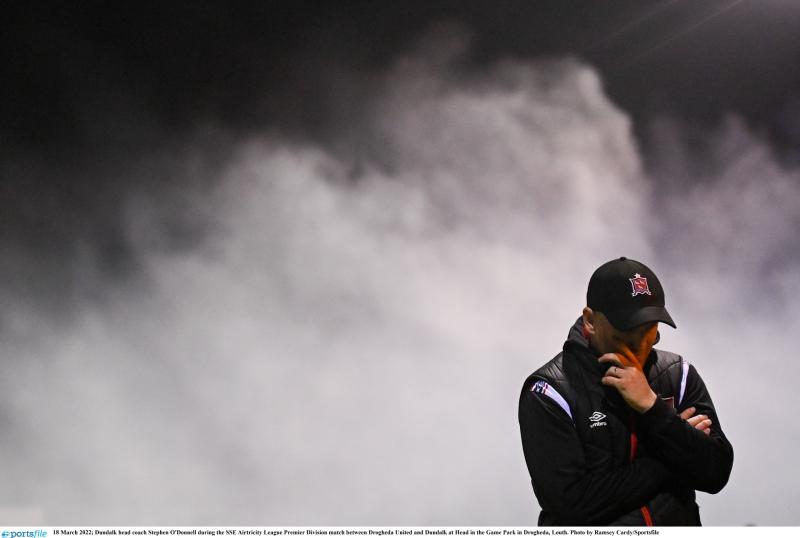 Dundalk lost the first competitive Louth derby of the season and their first league game as well when their near neighbours Drogheda United beat them by a single goal at United Park last Friday night.

That the win came from a controversial penalty was a pity as nobody could deny that Drogheda were by far the better side on the night. Dundalk were a mere shell of the team that fought out a draw with Shamrock Rovers four nights previously.

Drogheda’s winning goal came four minutes after the break. Greg Sloggett was adjudged to have fouled Darragh Nugent in the box. Referee Rob Hennessy pointed to the spot. Dean Williams stepped up and shot the ensuing penalty to the net.

Within three minutes Drogheda nearly got a second goal when Adam Foley fired a thundering shot off the Dundalk crossbar. Drogheda were practically first to every ball. They were an understrength Drogheda team as well, missing key players.

The loss on Friday is not of course the end of the world. But it has to send a clear message to the manager Stephen O’Donnell that his team have to start winning games instead of drawing and now losing games.

The Dundalk boss went for two up front, as he did with Shamrock Rovers. While it caught Rovers on the hop, it did not catch Dundalk’s near neighbours out. Pat Hoban was disappointing up front as well. He had a couple of clear-cut chances which he failed to take advantage of.

The midfield was cut open fairly easily by Drogheda on occasions as well. Its clear there is not enough physical strength in the middle of the park. Drogheda took full advantage of this throughout the game.

The same old problems were there in defence as well, which have been evident since the start of the season. Nathan Shepperd could not be faulted for anything in the game. He played as well as could be expected. He went the wrong way for the penalty. But that was not his fault.

Dundalk looked a team completely out of sorts. They were second to practically every ball. This Dundalk team are much better than this. Yet on Friday night they just simply failed to deliver.

After the game Stephen O’Donnell revealed that he knew the referee did not give the decisive penalty himself. O’Donnell said the ref was playing on, but that it was the linesman who gave it. The Dundalk boss said that this is what referee Robert Hennessy told him.

O’Donnell stated he had not seen any of the replays and could not question whether it was a dive or a genuine penalty. He felt that Drogheda looked dangerous on the counterattack but that his side did have a lot of the ball. They just did not do anything with it.

The Galwegian said that ultimately people will say that the sides who win the games like Friday’s were very good and say the opposite when it comes to the sides that lose such matches.

The Dundalk boss said that they would just have to accept that. O’Donell said he would not totally go along with this theory.

I asked Stephen why he went with the same team as Rovers. He said because they played well the previous Monday. Nobody could disagree with that. But the lilywhites were without Stephen Bradley on the Monday.

He was available and on the bench Friday. O’Donnell said that Bradley had only trained for the first time the previous day and they were not going to take a risk with him.

Well Bradley was eventually introduced after the break and stood out clearly as Dundalk’s most dangerous player. Indeed, he had one effort that came very close to levelling the game near the end.

Bradley did have a scan done earlier in the week. Thus the boss said they were not going to throw Bradley in from the start. The Dundalk manager said they have had a lot of draws. Some were mediocre results. Some were not.

But he says he expected that. He has been saying the same thing all year, that there would be bumps along the way. Friday was a bump. He knew coming into the job that Dundalk were not going to go bang from the start.

There were only two players signed when he came in. O’Donnell said he knew it would not be Dundalk challenging for leagues from the start. He saw Friday as a disappointment and that was not making excuses. He believes his team will recover from the result.

Crowds are up at all venues. Shamrock Rovers are playing in front of attendances of 7,500 at Tallaght Stadium every home game. The Brandywell is packed to capacity for every home game, as are most other venues.

To keep it this way clubs must keep the hooligans and thugs away and also those grounds with poor facilities must act to erase the problem over the coming short years. Supporters will only give their clubs a certain period of grace to begin planning to improve their facilities.

After Friday night’s game Dundalk centre half Mark Connolly said the team were all obviously disappointed. He told me the penalty just gave Drogheda the chance to hold onto something.

Mark said the penalty decision was very disappointing and the fact that only four minutes injury time was awarded at the end despite all the substitutions and injuries in the second half.

Mark said that Friday’s game was one that Dundalk need to be coming and winning. He said that Drogheda got the penalty and hung onto it which they did. The big Dundalk centre half said that the result does not give him any concerns at all.

He said the last time Dundalk conceded a goal In open play was against Bohemians and that there has been quite a few games since that, so Dundalk have been solid as a team. He said Dundalk conceded a soft penalty against Shelbourne and also against Drogheda.

Mark has been a player who has been playing well at the back. He is very crucial moving forward for the set pieces. He said Dundalk are a very young team and it was up to players like him to get the team to regroup and get ready for the next game.

He said that if his performances are ever below par he will make sure to put that right. He said there is a lot of experience here and his partnership with Andy Boyle in the centre has gone well so far.

He says the team have been gelling well together but that the result against Drogheda had been a setback. Mark also said that Dundalk have had a lot of draws and that he felt they should have won them.

He says of the five they should at least have won 3 of 4 of them. He says that yes Dundalk might have lost the Louth Derby and drawn five games but they were not going to hit the panic button. He says the team will dust themselves down and return after the break recharged.

Derry City had a great 2-1 win over Pats to jump to the top of the table on Friday night. Former Dundalk player Will Patching got the two goals to send Derry to the summit. Just over a year ago Dundalk let him out on loan to Derry for six months.

That was in the Filippo Giovagnoli, Shane Keegan and Bill Hulsizer era. It was a ridiculous decision. Will was top class when he came back and it was thanks to him and others he helped Dundalk stay away from the bottom two.

He was great for Dundalk in the Europa League against Vitesse as well. Dundalk nearly knocked the Dutch side out. They only exited the competition last Thursday against Roma.

Sligo Rovers held champions Shamrock Rovers 2-2 having led 2-0. The Dubliners have not started the season off as well as they were expected to. Finn Harps beat Shelbourne 3-0 at Tolka Park, while Bohemians were held to a 1-1 draw by UCD.

The league takes a break next weekend with the international week taking centre stage. Best of luck to Stephen Kenny in the two friendlies planned for the Aviva this coming Saturday and next Tuesday.

The Republic play Belgium at the Aviva on Saturday and Lithuania at the same venue three days later. Stephen Kenny continues his daily training schedule, pounding the roads around Blackrock.

Great news for Dundalk players Nathan Shepperd, Dan Williams and Joe Adams who were all called up to the Welsh under 21 squad for the upcoming UEFA European under 21 Championship qualifiers against Bulgaria and Switzerland.

Nathan has been in fine form for Dundalk of late. He was top class in the Shamrock Rovers game and should in my opinion have been given the Dundalk man of the match award.

Former Dundalk under 21 keeper David Odumosu was brought into the provisional under 21 Republic of Ireland squad last week. Sadly, he was not named in the final squad.

Dundalk FC Academy players Tadhg Walshe, Oisin Coleman and Michael Keyes were called up for the Republic of Ireland squad for the Centenary Shield against Scotland on Saint Patrick’s Day.

As I finish this column, I cannot get the mass murder of the innocents being carried out by Vladamir Putin and his Russian soldiers in the Ukraine out of my head. Let’s just hope this brutal war can be brought to a swift end soon. Have a safe week. And please always remember be careful out there.