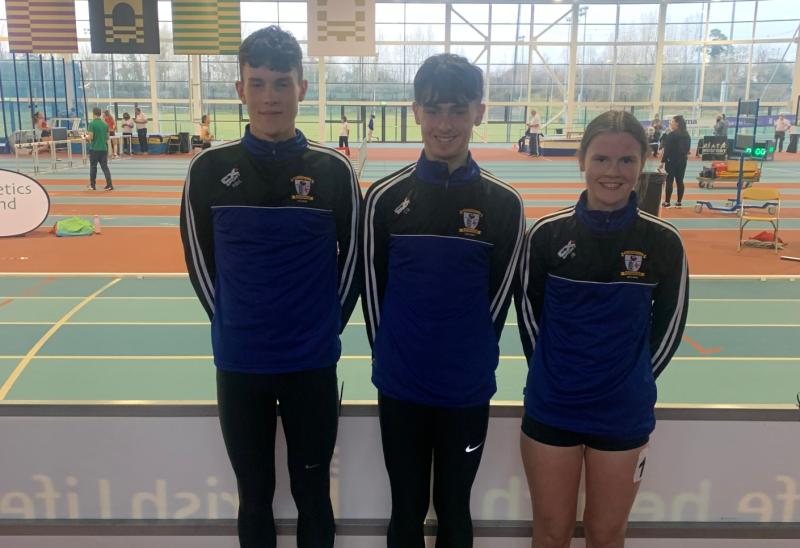 Rory McLoughlin put his disappointment of missing out on a National Medal at last year’s National Championship out of his mind when he finally won his first individual National Track and Field medal, a silver in the Boys U19 800M.

Rory didn’t have the greatest of starts but worked his way into second place by the end of the first lap. He then gave his all and chased the eventual winner for the next three laps and in doing so pulled away from all of his other competitors to open up a sizeable gap.

And although that gap closed slightly in the last 200M, the young runner had enough done to hold onto his place and win his first individual National medal in a time of in a time of 1.59.58, a very well-deserved achievement for his fantastic dedication to training over the last couple of years.

Rory’s training partner and fellow member of St Peter’s middle distance group, Cian Gorham, was also once again on the Podium at a national Championship. Cian has been one of the most consistent juvenile performers at middle distance running in the Country over the last couple of years.

Cian’s race was also stacked with quality and was very competitive from the gun. Cian got himself into a good position from an early stage and used all his experience to hold onto third place and take the bronze medal in the under 18 800M race in a time of 1.59.86.

Niamh Brady who also qualified for the national U18 800M but was unfortunately not able to take her place on the start line due to sickness and so it was left to Judith Bell to carry the flag for the St Peter’s girls and she carried it well.

Judith competed in two events, which is an achievement in itself, but also managed two personal bests which is all anyone can do on the biggest of stages.  She managed to come out of a stacked heat to make it through to the final of the 60M Hurdles, having jumped to a new PB of 4.25M the previous day.

All four of these athletes along with their fellow club mates will now turn their attention to the upcoming outdoor track and field season.

Meanwhile also strutting their stuff in Athlone earlier this month were the young athletes of Blackrock AC who headed to the indoor arena to compete in the Leinster indoor championships.

The club had two two teams competing on the day, the U14 girls’ team was made up of Jenny Hawe, Sophie Skelly, Rebecca Trimble and Lucy McMahon. The U12 girls’ team comprised Robyn Gartland, Hollie Casey, Rachel Clarke and Charlotte Trimble

Both teams but in great performances with this been their first indoor relay championships. Blackrock had a thrower to cheer on too as Aiobhin McMahon competed in the shot putt at the Junior National Championships.

Continuing on from her success in the Senior national championship earlier this year, Aiobhin won gold finishing off her indoor season in style.