Trip Through Time: The Loakers in Blackrock and some stories about Dundalk Bay 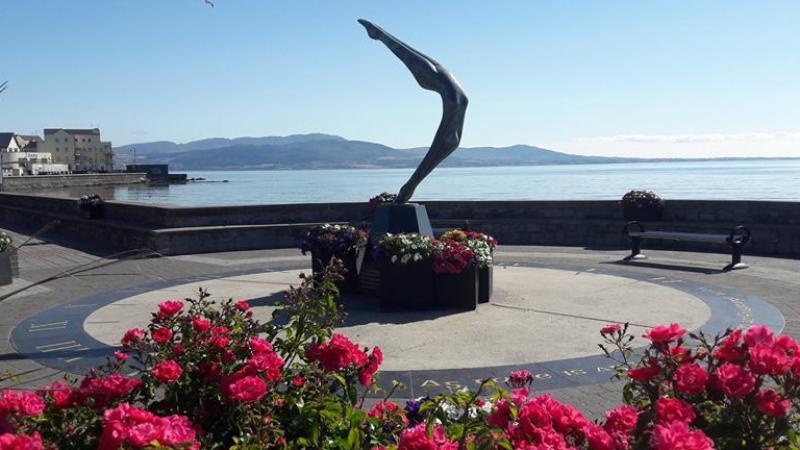 Since I wrote about the area on the way into Blackrock Village from Dundalk called ‘The Loakers’, I have received several interesting comments from local people about the origins of the name.

It appears from these reflections that local poet Noel Sharkey was correct when he suggested that it comes from the Irish for rushes, ‘An luachain’.

One of the most interesting communications, however, comes from my good friend Charlie McCarthy of the Coast Guards House who has provided me with much valuable information about this unusual part of Dundalk Bay that stretches from the Soldiers Point to McGuigan’s Rock where Blackrock proper begins.

He refers to an old journalist, Jim Conlon who lived in a house he called ‘St. Gerard’s’ on the slope overlooking the entrance to the Village before you come to The Square, which must have been the original fishing settlement which became known as ‘The black rocks’ because of the colour of the sharp rocks that stick up out of the sand for a couple of miles.

I knew Jim very well because, when I started journalism with the Dundalk Democrat, he was the Editor of the old Examiner newspaper in Clanbrassil Street which ceased publication in the early 1960s.

Jim then joined the staff of the Argus and he was also a prolific correspondent for the Irish Press and, for many years, provided the overprints, with local news and sports results, for the Evening Press from a premise in the Demesne.

What I had not realised was that Charlie McCarthy, himself, had grown up in that part of Blackrock and, apart from his extensive marine knowledge, has a great understanding of that area of Dundalk Bay.

This knowledge, in turn, sparked my own memories of that part of County Louth which goes back for the best part of a century.

It made me realise that this area on the outskirts of Dundalk has changed, perhaps, more than any other part of the environs.

It would be an understatement to write that it has become urbanised over the past century and that much of the character of that part of Dundalk Bay has changed utterly!

To begin I would point out to my readers that 150 years ago it must have been nearly impossible to approach The Square area of Blackrock by this route and Dundalk people would have had to go miles out of their way to get to the Promenade at Blackrock by way of the Dublin Road.

That area where the Sea Rampart ends would have been a lonely and desolate place that was covered by tidal sea water for much of the time and a place where wild life species of birds and fishes, that have long disappeared, lived and thrived.

My own first memories of that road, through The Loakers, was being pushed in a ‘go-car’, the old name of a child’s buggy, by my mother on the road past the ‘Broken Turn’ to the sands at Blackrock.

I can still recall that it was usual for the high tide to come right up to the road and, sometimes, the road itself would be flooded and we might have to turn back.

Sometime later, I think about the time when World War II started, my father used to carry me on the bar of his high bicycle to a little cove that existed at the foot of McGuigan’s Rock, where we could bathe in the sparkling waters of the Bay.

People could not do that these days, as houses have been built over the entrance to that cove and the green vegetation has spread right over to the Rock to cover the sands.

I describe this area as ‘sand’ but it was mostly a dark, muddy surface which some Dundalk people believed had a curative quality and would squelch through it to try cure their feet of imperfections.

I recall my father telling me that Mrs Donnelly, who had a chemist shop in Park Street and had a summer house at Blackrock, had assured him that to walk through this mud was good for the feet and that she herself would do this regularly!

Another thing I remembered about that stretch of the Bay was that Jim Conlon pointed out a part of it where he and his siblings (he was a member of a large family who were children of of a caretaker employed on the Whitworth Estate which was later purchased by the Dundalk Golf Course), used to gather shell-fish for food in his home.

One of his stories that intrigued me was the method by which they gathered razor fish which he described as being ‘delicious to eat when boiled’!

He said, after the tide receded, two of them would run would run out with a long rope and knock over the long razor fish when they would rise out of the sand; otherwise, he said, the shell fish would be nearly impossible to collect, because they could quickly slide back under the mud when they sensed footsteps approaching.

Another subject that I recall Jim telling me about was that it appears local business people had believed that they might be able to reclaim land from the sea on the shores of Dundalk Bay.

It appears that somebody had contacted a Dutch marine expert who had been involved in the reclaiming of the Polders from the Zider Sea and persuaded him to come over to look at the Dundalk Bay with a view to doing the same here.

According to Jim, this Dutch engineer had told the sponsors of this project that he would build a dyke for them, from about Gyles Quay to Annagassan, for the amount of gold sovereigns that could be laid, side by side, across the distance.

Needless to say, according to Jim, this would have been a lot more than could be raised in Ireland at the time.

Now, Jim was not above embroidering a good yarn, but there may well have been some truth in his story - one has to wonder if, given modern engineering machinery and the growing need for more land because of increasing populations, at some time in the future such a project might be undertaken?