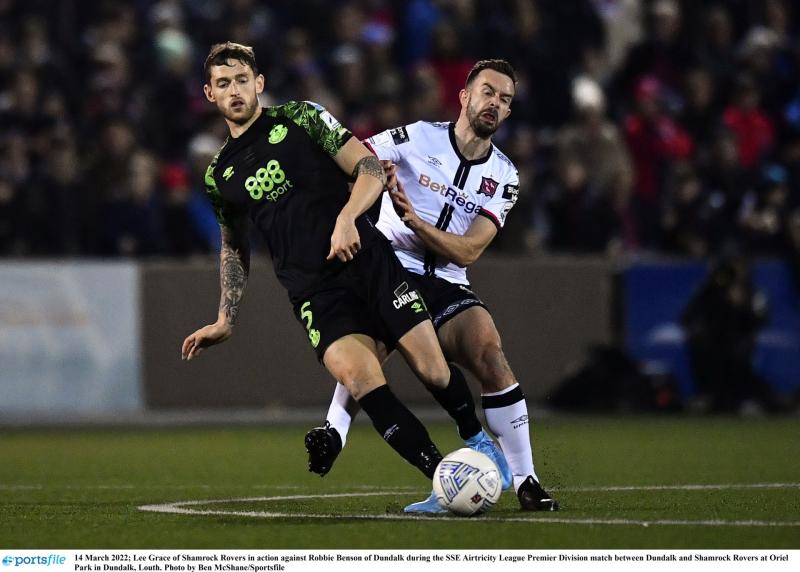 It was scoreless at Oriel Park as Dundalk FC drew for the fifth time in six matches in the SSE Airtricity League Premier Division after failing to break down Shamrock Rovers.

The Lilywhites, unbeaten this season, had the better of the chances overall, but neither themselves or Rovers could break the deadlock in what was an entertaining 0-0 draw.

Dundalk were very much the better team in the opening half and could have taken the lead on seven minutes when Rovers’ goalkeeper Leon Pohls, in a rare outing, made a hash of a ball into the box – a mistake which almost afforded Dan Williams the opening goal.

Williams again tested Pohls moments later, but this time the German stopper was equal to his effort – not long before Robbie Benson headed wide from a Patrick Hoban cross.

Rovers’ best chance of the half came on 25 minutes when Welsh U21 international Nathan Shepperd got a fingertip to ex-Dundalk midfielder Richie Towell’s effort.

However, it was the hosts who continued to threaten for the remainder of the half, and Pohls saved well from Hoban’s header after he had got on the end of Benson’s corner.

Dundalk again went agonisingly close when another Benson corner from the right was met by Mark Connolly – only for Graham Burke to hook his headed attempt off the line.

The second half was not even a minute old when Williams tried his luck with another long-range attempt which fizzed just over the top of the outstretched Pohls’ crossbar.

Not long after that chance, Benson played Hoban in on the right, but the Dundalk striker who recently hit 100 league goals simply couldn’t get enough purchase on his shot.

In the midst of what was a decent spell from Rovers, who had seemingly weathered the storm, Danny Mandroiu was denied by the feet of Shepperd from a tight angle before Towell – after being slipped in by Jack Byrne – crashed the frame of the woodwork.

Shepperd produced a world-class save on 75 minutes to somehow keep out a downward header from substitute Aaron Greene, who looked destined to give Rovers the lead.

Three minutes later at the other end, Pohls got down well to save from Hoban’s close-range header after the ball came down from orbit towards the Dundalk frontman.

Hoban missed a sitter deep into stoppage-time when he skied over from Greg Sloggett’s set-up in what was the final piece of action as both sides settled for a point apiece.