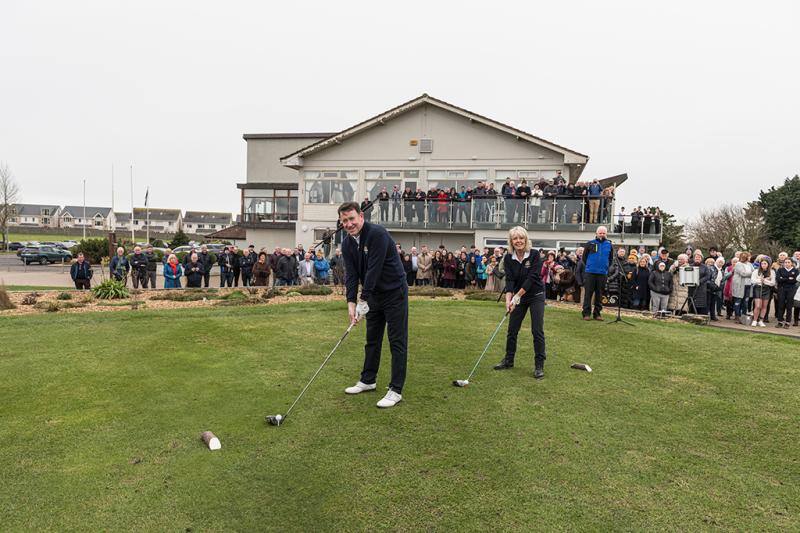 The 2022 Captains’ Drive-In took place at Dundalk Golf Club on Saturday, February 19, in front of a large crowd made up of club members, family and friends.

Captain Eoin Doohan, Lady Captain Alison Quigley, Boys’ Captain Christ Clarke and Girls’ Captain Anna Rowland were led through the crowd to the first tee by a piper before stepping up hit their ceremonial shots. We wish all four captains the very best for their year in office.

Due to the inclement weather caused by Storms Dudley, Eunice and Franklin many competitions in the latter part of February were cancelled.

There was good scoring over the 14 holes played in the Tiernan’s Centra Singles Stableford competition on the final weekend of February. The best score of the tournament was the 36pts shot by Edward Lawrence to win Division Four.

In Division 1 countback was needed to separate Christy Ward (5) and Trevor Giff (8) after both had shot 31pts with Ward edging it having scored 21pts over the final nine holes. Peter Rogers had the competition's best gross score with 26pts.

Dundalk Golf Club is delighted to be supporting Andrew Keenan in his herculean efforts to raise money for both the Irish Cancer Society and the North Louth Hospice.

On Saturday 2 April, after Andrew finishes his final run at the Clubhouse, we will be hosting an evening of celebration and song to mark the occasion with the Bobby McCarthy band with special guests providing the entertainment. Tickets are €20 and are available from the Bar.

There is also a members draw for a 2023 subscription. Tickets are €20 or three for €50 and can be purchased at the Bar.