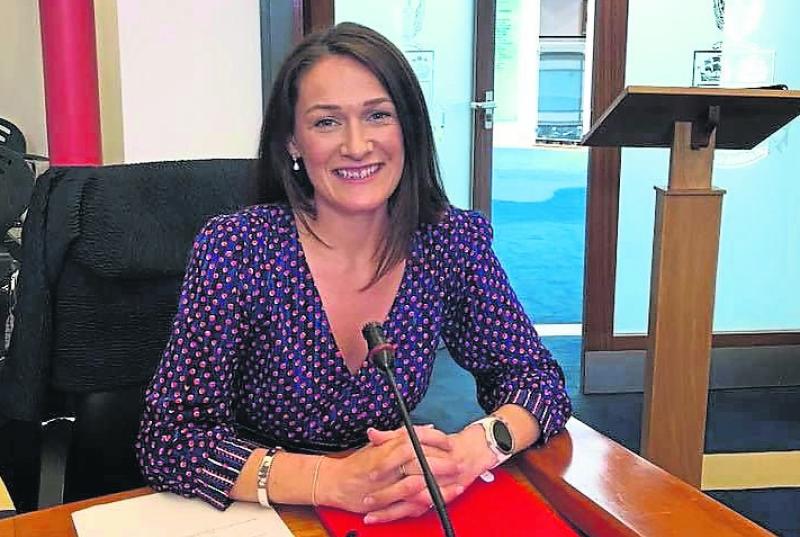 Louth Senator Erin McGreehan has called on more to be done to tackle the practise of “energy dumping” and instead use that energy to tackle fuel poverty.

Senator McGreehan was questioning Minister of State at the Department of the Environment, Climate and Communications, Deputy Ossian Smyth in the Seanad yesterday.

“We are in the midst of an energy crisis.

“Families are suffering from energy poverty, as outlined as recently as last week by the Society of St. Vincent de Paul.

“We are also in the midst of a climate crisis, but we have ambitious plans underpinned by the climate action plan and our commitments under COP26.

“This is a complex issue.

“From one perspective, it is about the complexity involved in ensuring the stability of the energy grid across the island of Ireland.

“On the other hand, wasting energy is a moral issue.

“Hundreds of millions of euros worth of energy are dumped in Ireland instead of being used to tackle energy poverty.

“As individuals, we all know that we should not waste electricity or other forms of energy because it will cost us in our pockets and is bad for the environment.

“When I first heard of the scale of renewable energy that was being dumped in Ireland, I thought it was immoral, given that hundreds of thousands of families were in energy poverty.

“I recognise that there are technical and electricity grid-based challenges that need to be addressed, but if there is political and regulatory will, it can be achieved.

“This is where EnergyCloud comes in.

“It is a not-for-profit organisation with a mission to create solutions and divert to Irish homes surplus renewable energy that would otherwise be wasted, with a primary focus on those households in fuel poverty."

“Regarding the renewable energy that is being dumped, I examined the potential retail cost to consumers and what it could cost families in fuel poverty.

“According to EirGrid, 1,448 GWh of zero-carbon energy from wind generation was dumped in 2020.

“This was equivalent to 11.4% of the total available wind energy.

“Based on Electric Ireland's 24-hour standard rate of 21.2 cent per KWh, the 1,448 GWh of dumped energy cost families more than €305 million, excluding VAT.

“The Minister of State will agree that this is immoral.

“In less than four years, more than €1 billion in energy will have been dumped.”

The Senator added that Infrastructure was already in place that could help divert energy towards heating water.

“Last year, the Minister for Housing, Local Government and Heritage, Deputy Darragh O'Brien, launched the first phase of EnergyCloud, which involved a project with Clúid Housing.

“The goal of this initial phase is to reduce renewable energy wastage and divert energy towards the social good of heating water in fuel-poor homes.

“At the launch, the Minister stated that the simplicity of the project's approach was that it could utilise the existing infrastructure in the home, such as hot water tanks, to receive surplus renewable energy at a time when it was not needed on the grid.

“The use of existing infrastructure in the home reduces the capital expenditure required for this project and allows organisations like Clúid to upgrade their properties quickly in order to avail of surplus renewable energy.

“Through our local authorities and AHBs, the State can play a leading role in helping to use surplus renewable energy while tackling energy poverty and ensuring that there is no waste.

“However, as I mentioned, €305 million worth of retail value is being dumped annually.

“The redeployment of renewable energy to heat hot water in homes could also displace significant volumes of CO2 and avoid millions of euro in carbon penalties to Ireland.

“Crucially, that can be done now as that technology is in place.

“We just need the Commission for Regulation of Utilities to work with the State to make it happen.

“We are not being told the value of what is being dumped.

“While all the people are having to make stark choices about their own homes, the State is sleeping on this dumping.

“There is an opportunity to engage with EnergyCloud to explore the solutions available, to use this energy in social housing homes and to reduce the impact of fuel poverty.

“The Government needs to sit down with all the participants in this process and decide if we should continue to dump 100% renewable energy that could be used to address fuel poverty. Where there is a will, there is always a way.”

In reply, Deputy Ossian Smyth acknowledged that such a system could help alleviate energy dumping and noted that a number of trial projects are currently underway.